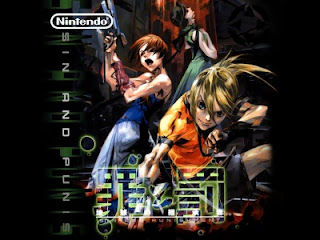 In the near future, the population of mankind has radically increased and food supplies are at an all time low. To counteract this, scientists have artificially created beasts, which now serve as a new way of harvesting meat. They’re placed in Japan for testing, but mutate along the way, so things go horribly wrong for the populace.
A group called the Armed Volunteers seeks to stop the creatures, whilst simultaneously oppressing the Japanese citizens. As the player, you take control of rebels Saki and Airan, two members of an opposing group that seeks to save Japan from the beasts and the oppressive militia.
Unfortunately, this is one of those games where you need to either read the manual or do some internet research to figure out what the heck is going on. In fact, most of the details above aren’t mentioned in the game it all. You’re thrown head first into the storyline and then expected to keep up. With that said, it’s an interesting concept with an equally winning plot once you parse it.
Many have described Sin & Punishment as “Star Fox on foot”, but that’s not quite accurate. While both games are on-rails shooters, the former is far more advanced in terms of mechanics. With gun in hand, you’ll take down hordes of Armed Volunteers and Ruffians as you attempt to liberate Japan. Your character has the ability to move left and right in the auto-scrolling environments and can double jump on command. Much of your time will be spent standing in one location as you dodge enemy fire, incoming obstacles, and take down massive machinery before advancing.
You’re given a time limit of 99 seconds in each stage, which can only be increased by taking down mini bosses or nabbing certain purple orbs amidst all the action. Instead of just firearms, the two protagonists also have swords at their disposal. These swords can deflect rockets (try that in real life), deal major damage to nearby rivals, or be used in skirmishes with sword-wielding bosses. 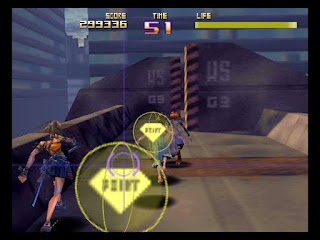 Along the way, you’ll also run into several larger foes – bosses. These guys can be challenging, but they’re often one-note. To elaborate, this basically means that once you’ve learned what strategy takes them down, they become a walk in the park for subsequent playthroughs.
When all is said and done, you’ll probably be finished the game in a good hour or two. That sounds abysmal for a premium priced Nintendo 64 game (200 extra points for the translation on top of the regular 1000), but the game isn’t supposed to be too long. It’s just arcade action at its finest, with some cutscenes thrown in to form a cohesive experience. If you’re just here to play the story, Sin & Punishment may be a waste of cash.
Instead, the source of Sin and Punishment’s magic is the way it manages to change things up so radically within that short amount of time. One stage might be a side-scroller, another may have you flying around at obscene angles on a makeshift telepathy-powered air-raft, and another gives you control over a Ruffian (the beasts bred for meat) in a sea of red, and one has a chase scene with platforming segments. Without spoiling the concept of the final battle, it’s arguably one of the best over-the-top fights in video game history. The game is choc full of so many memorable moments that you’ll feel genuinely compelled to boot it up every now and then even if you’re not one to better your high scores.
Thanks to an easy mode, the game should be relatively accessible to newcomers. So long as you’re not flailing about randomly in the hopes of taking down your foes, you should be able to beat the game without a problem. The game is powered by a continue system, but it’s a very generous one that gifts you new continues regularly. Heck, you can die to the last boss and gain a few.
Another reason the game gets compared to Star Fox is likely the presence of voice acting, a rare breed in the N64 landscape. Characters can sound a bit overdramatic at times, but the presence of voice acting really adds something. It also goes without mentioning that this is was of the most impressive looking titles on the system. Sure, it looks pretty polygonal in spots today, but the bulk of the game gets the job done nicely. 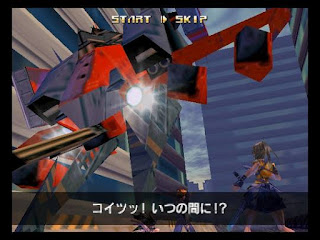 If you’re worried about potential language barriers…don’t be. Sin & Punishment is different from other import titles in that it was already translated into English, complete with voice acting, but never released outside of Japan. In a twist of irony, the language is more off-putting for the Japanese players. There’s no local voice acting and many of the Japanese subtitles appear for roughly half a second, giving native players no time to analyze the text in the story sequences. The ending is exclusively in English as well (though perhaps this was altered for the digital release). The only real change made for the Virtual Console release is the addition of translated menus, which probably took just a few afternoons to implement.
So long as the prospect of paying $12 USD for a short game doesn’t bother you, Sin & Punishment should satisfy your arcade shooter needs. It’s top-notch in terms of gameplay and presentation, so that should count for something.
-Clark A