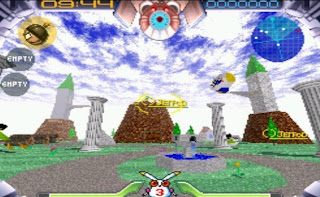 Super Mario 64 is often cited as the first major 3D platformer, but that’s just what it was – major. Several other titles beat Nintendo’s launch title to the punch, and although it differs greatly in mechanics, Jumping Flash is one of them. It’s not nearly as impressive as it would have been in 1995, but it’s a cute little platformer that showcases what the PlayStation hardware was capable of.

Right out of the gate, the first thing you’ll notice is that the game is played from a first person perspective. Think Mirror’s Edge with a robotic bunny (appropriately known as “Robbit”) instead of an athletic woman. While there is a lot of jumping like the title implies, you’re also equipped with a laser for dispatching of foes.
Your objective in the first two levels of each world is to collect four carrots called Jetpods and then make your way to the goal. It seems like a fairly straightforward task, given that the levels are often very small in size. Heck, the game even points out the locations of the carrots and exits on your visor. The enemies aren’t very aggressive, so you can usually take the pacifist route and avoid them as you search for the veggies. You also have another foe in the form of a time limit, but I never once found it to be remotely restrictive. Should you die or run out of time, you’ll have to collect the carrots once again. 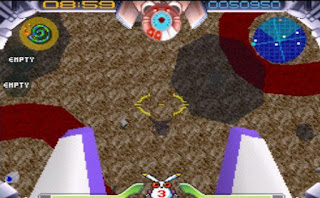 The third level in the world puts you up against a giant boss creature. These levels aren’t too challenging, since the strategy often comes down to just shooting when the enemy is still and running when it takes action. Still, the moments where the boss switches up its approach makes these bouts feel exciting.
The real entertainment comes from taking your time to explore the miniature worlds at your own pace. Despite the time limit, you’re still given a lenient curfew before you need to start playing properly. The time can also be increased by grabbing power ups hidden throughout the stage (offering even more incentive to adventure).
Robbit has a double (and sometimes triple) jump at his disposal, but that’s not enough to get you everywhere. You need to hop on several floating platforms to traverse the landmarks and floating blocks in the sky. When jumping in the air, your view automatically points downward to your feet. That’s annoyingly disorienting at first, until you realize the game is trying to show your shadow to simplify the hopping process. Kudos to the developers for implementing this, otherwise there would be cheap deaths aplenty.
Controlling Robbit is a far cry from the fluidity offered by the dual stick first person shooters of today. Your aim is permanently locked to the center of the screen, so you need to move around and jump a lot in order to shoot with any accuracy. On top of that, Robbit is controlled only with the D-Pad. It’s a decidedly gauche control scheme at first, but things become painless once you master it. 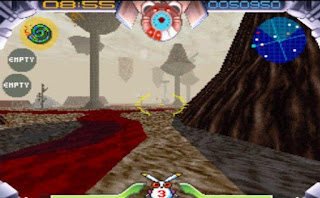 Some would say things become too easy, though. Most of the levels can be completed in a handful of minutes or less. That seems reasonable enough for a platformer, but there are only 18 stages (including the even shorter boss battles). In other words, that’s 12 rather brief levels. There are some unlockable modes after you’ve completed the game, but I didn’t find that the altered carrot locations change things too much.
On the bright side, each world feels memorable and has its own individual theme to make it stand out. One level might be on the outside of a volcano, while the next will put you inside an ancient pyramid maze or on a toy train track.
The visuals and sound are a mixed bag. The levels themselves are colourful and lively, but the grainy, low quality polygonal nature puts a damper on things. Similarly, the music ranges from infectiously catchy to utterly forgettable. It’s a nice touch seeing cutscenes and voices, though.
Jumping Flash won’t last terribly long, but it’s quite the experience for the time it does. There aren’t many similar games either, so you might want to consider it if you’re burned out on traditional 2D platformers.
-Clark A