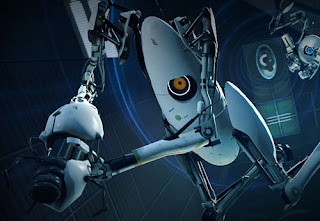 In the beginning of May, I joined this site and posted an article about Portal 2’s upcoming “Perpetual Testing Initiative” update. The update would include a simplified level editor for all Portal 2 owners in which they could create and distribute their own Portal-esque puzzles. The update would also add Steam Workshop support to the title, which would aid in distributing of levels and allow players to filter what levels they wanted to pay, whether they be highly community-rated or just have lots of 1500 Megawatt Aperture Science Heavy Duty Super-Colliding Super Buttons.

Days go by and the Perpetual Testing Initiative update is released with what could be considered tremendous success. Within hours there were over hundreds of different community test chambers and two weeks later that number has grown close to 100 thousand unique, player-created puzzles. This goes to show that the Portal 2 level editor is not just some interesting side-tool that will lead to some mildly entertaining distractions. However, is it worth being part of the Perpetual Testing Initiative for the non-creator who has a mild interest in user-generated content? Hopefully my organised analysis will shed some light on this question.
Part #1: The Level Editor 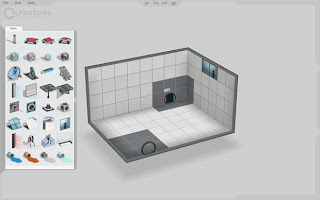 Thankfully that answer is a decisive no. The movement controls are simple and well-done; the left mouse button performs a variety of actions (selecting a panel, placing testing apparatus, holding it down will enable dragging the user’s view on an X and Y axis) while holding the right mouse button moves the level like a globe according to the following mouse movements. Other than the ‘-‘, ‘+’, and ‘P’, which are used for indenting, extruding, and portal-enabling/-disabling surfaces respectively, the rest of the keys on the keyboard are ignored (F# commands are still used for saving, playtesting, and other options that are available through drop-down menus). These controls keep the level editor simple enough for anyone to use and are not off-putting to those accustomed with complex level editors.
Adding testing apparatus to the level is extremely easy; bringing up the sliding menu on the left of the screen shows all of the available puzzle elements, which can be selected and then placed in the level at any position the user desires. However, there is a slight problem when placing a puzzle element in the level; there is no way to move the level while holding a puzzle element. Both 2D movement and globe movement are impossible to perform and attempting to perform them will remove the currently selected puzzle element from the mouse. While aggravating, this can easily be avoided by positioning the camera so that the area that you want to place puzzle element is visible before you select the puzzle piece.
As for moving already-placed testing apparatus, the player will have two options; the player will either be allowed to rotate the object 90 degrees in any direction or move the apparatus into predetermined positions within the selected tile. While I’m unsure it’s an exclusive feature, the indented testing lights allow for multiple lights to be positioned within the same panel, which is a nice touch when trying to add some flair to a test chamber. However, the ability for the player to rotate/reposition these objects is not obvious at first; it took me over an hour-and-a-half to realize that the this function was even an option. The icons that notify the user that the apparatus can be repositioned/rotated are so faint and hollow that they are extremely easy to overlook. This is easily my biggest complaint, as rotating and repositioning puzzle pieces can make much more puzzle opportunities. Thankfully, once this feature is noticed it is hard to forget.
Now moving along to the drop-down menu options, they all serve their function very well; saving a test chamber saves the current map that the user is editing, building allows the test chamber to recompile with the added changes, and publishing a map is easy and seamless. There’s nothing I can say against the drop-down menus except that the “Build” functions takes a bit long, but that may just be my computer.
Overall, the editor has the look and use of a simple editor while still providing a lot of variety that usually comes with advanced editors. The consistent visuals of the clean test chambers make playing the levels and editing them a much nicer experience than if Valve had decided to use the destroyed test chambers palette or the 1900s test chamber palette. While some notable features aren’t present, such as diagonally-placed panels or fake/room-connecting doors, everything else is included and is not a hassle to deal with.
Part #2: Steam Workshop Integration 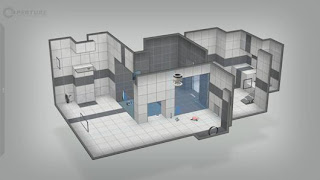 The closest thing that resembles the Portal 2 section of the Steam Workshop to me is an online arts-and-craft sharing website; there is a search bar along with tags that can direct you to specific maps and clicking on a user’s profile brings the viewer to all of that user’s works. You can also search by overall map rating and most recent additions, along with the usual most popular map from a specific time-slot, ranging from the specific day to the last month. Another feature of browsing the community test chambers is that there also exists an option to filter maps by whether or not they have custom visuals and/or stories, which filters out the maps created in the Portal 2 SDK and rejects those created with the in-game editor. You download maps by either clicking on the green plus symbol when browsing multiple maps or by hitting the “Subscribe” button on the map’s corresponding webpage. If you happen to like or dislike a map, you can go to that map’s page and vote it that way accordingly. You are also able to favorite that map and report it if the chamber too closely represents a phallic symbol or contains other things that are not normally associated with kindness. Map pages also allow comments to be added so you can tell the creator (and others) whether they did a god job or a poor job and be more specific on certain gripes.
While the Steam Workshop integration for Portal 2 does come with a lot of features, do they add up to make an enjoyable experience? For me, that answer is a “Yes” and “No”. Let me explain;
As an in-game way of browsing for maps, I feel the system is clunky. For those unaware; while in the “Play Chambers” section of the Community Test Chambers menu, there is a button labeled “View The Workshop” or something similar. Instead of having some sort of in-game browser, this brings up the Steam browser in the Steam overlay. Not only is this an inelegant solution, but it can also become a very awkward browsing experience as those who cannot play the game at their native resolution will have to compensate for the smaller browser view. Not only that, but if a user decides to actually download maps using this option, they will have to exit the Community Test Chambers menu and its according sub-menus in order to initiate the downloads. It is just not a convenient service that compliments Steam’s dedication to comfortable usability.
However, I started thinking differently about the Steam Workshop integration when I started using it outside of Portal 2. The Steam Workshop effectively allows any Steam user to queue test chambers for automatic download from any browser they can access and the browsing experience becomes greatly improved by native resolution browsing. The fact that I’ve always experienced faster standard browser webpage loading than Steam browser webpage loading compliments the experience to a T.
Ultimately, I feel the system is great for quick browse-and-add-a-map moments outside of the game, the system being tied to Steam’s other functions while being used inside the game becomes a bit frustrating.
The Overall Verdict:
Should you make/play test chambers with the Portal 2 level editor? Absolutely. the editor is easy to use (even if some features could have been added) and the Steam Workshop integration is a great tool for adding maps and letting them download later when booting up the game. Just remember; it’s best to quit out of the game first and then start adding maps for download.
Share this