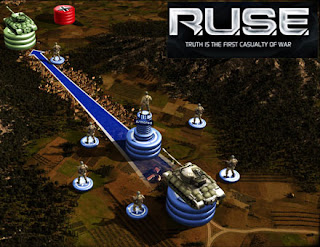 What happens when you take a genre that console gamers don’t usually get to enjoy, work hard to make it look good and play well and then release it? Encouragement to never do it again. That’s precisely what happened to one of Ubisoft’s most interesting games in recent times, R.U.S.E.

From the start the game worked hard to display its strategic credentials. Scale the map right back and you’ll get a tactical view of the battlefield that looks like the tabletop wargames of old. The careful pacing allows players to think and react with precision and implement real-world military tactics. The ‘Ruses’ that the game took its name from added another layer to the strategy, abstractly recreating the role communications and espionage plays in war.

At the same time, there was concessions to the more traditional console gamers. It was possible to zoom right up to individual units, which gave players a dynamic view of the action that is rare in wargames, but expected of console games. There were Move controls in the PS3 game built in to adequately replace the traditional mouse-and-keyboard controls. The gameplay style itself didn’t demand the use of hotkeys, which has been a traditional bottleneck preventing RTS games working well on consoles. 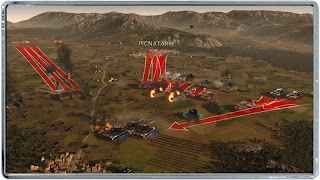 Bringing the two together should have been a big success. It was well received by critics overall (78 rating on Metacritic for the Xbox 360 version), and that was always going to be a problematic area for the game. Many of the less positive reviews pulled the game up for its “slow pace,” but that’s largely the point of these larger-scale strategy games. Would you criticise chess for being slow? Possibly, but you’d be missing the point. Those critics that understood how strategy games work were overwhelmingly positive about the game.

But something went wrong. According to VGChartz (not the most reliable source of game sales data, I know, but a good guideline), R.U.S.E sold just 700,000 copies worldwide. The developers, Eugen Systems, went back to PC-only development for the followup Wargame: European Escalation.

What happened? Gamers constantly cry out for new IP and for developers and the big publishers to push the envelope, but over and over again they don’t reward those developers and publishers that develop new IP and take creative risks. We saw it with Kingdoms of Amalur and its underwhelming sales, and before that R.U.S.E was proof that gamers don’t actually like stepping away from their comfort zones.

It’s a great pity. Though the wargame genre is a niche one, it’s an enormously rewarding genre, and with the emergence of digital distribution, it seems destined that the genre will find its future home on the iPad rather than the consoles. Or, in other words, because console gamers don’t invest in new IP, the genre that is undeniably hardcore is going to end up on the devices that “hardcore” gamers decry as being “casual.”

E3 2012 preview: Without Apple, is it still the “true” industry event?