Total War would be a series that would make the move to the iPad perfectly. It’s a strategy game series, after all, and we’ve already seen that genre work very well on Apple’s platform – after all, these games don’t really need buttons.

That said, Total War Battles: Shogun is a wasted opportunity, and not really a Total War game at all. This is one of those “strategy” games that we see so often sold on the App store for $0.99, where one side’s forces are arrayed at one end of a 2D plain that is split into a series of rows. The goal is to defeat the enemy on the other side of the screen.

To do this players build units, and send them on autopilot into the enemy ranks. There’s a limited ability to move units up and down on the playing field as they advance, but it’s not possible to stop them from moving, let alone reverse their movements. On top of that the AI will automatically decide which unit to attack when there are multiple choices, and given the limited size of the playing field there is no room to perform outflanking maneuvers. 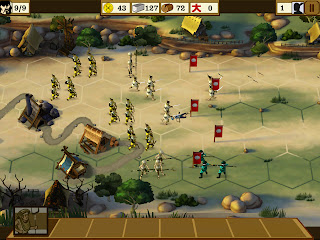 With that combination of limited control over moment, as well as the relatively thin range of units, the strategy side of Total War Battles is limited indeed. That’s very unfortunate given how nuanced and detailed the PC games from the same series are. What’s left when you pull strategy out of a strategy game? Not a whole lot.

There’s a bit of a base building jigsaw puzzle involved, where works a little like classic Age of Empires. Each the various buildings opens up units to recruit, and each takes up precious space in your home base. Being able to quickly and efficiently put together a base is a key part of the early part of the game.

There’s also a local multiplayer game, which is watered down even further. Players sit on either side of the iPad and slide predetermined units on to the play field. It’ll only last for a few games before the utter lack of depth becomes boring, but it’s a nice touch nonetheless. 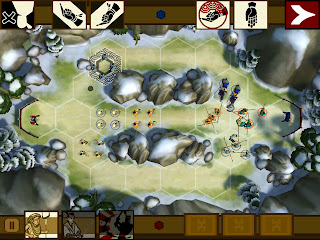 The main appeal of the game is that it’s a fairly good looking game, with units animated smoothly and the buildings have some nice detail. The sounds of combat are of a high standard and it’s possible to zoom quite close into the action, at which point the game looks like it belongs on a better game.

But ultimately this is a $0.99 being sold at nearly $8. There’s nothing wrong with it, the presentation is nice and there are a fair few levels to play through, but this is not the kind of in-depth strategy game we’ve come to expect from Total War, and it does very little real innovation to separate it from the pack. C’mon Sega, Total War deserves better.

Eight really great games that will make you feel dirty