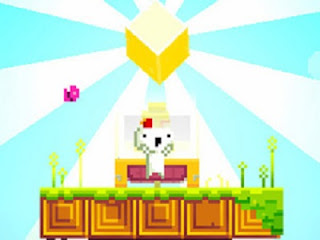 So. Phil Fish, yes? The man that tore the Japanese games industry to shreds has released Fez, a game that won awards before it was even released. There’s a lot of discussion about Fish’s antics that have in some ways distracted people away from the game of Fez itself, but I’m going to weigh in here and say Fish is in no position whatsoever to criticise the Japanese industry.

That’s not to say Fez is bad, per se, but rather it is as generic and uninspired as the Japanese games that Fish is so keen on dismissing. Sure it plays itself up as creative and it’s a well designed game but it’s not nearly as clever as it likes to think it is.

The basic crux of the game is that it’s a 2D puzzle platformer with the unique quirk that it plays in three dimensions. Though the fez-wearing hero can only travel in two dimensions, the world itself is made of square blocks. A simple tap of the Xbox 360’s shoulder buttons will shift the playing field to a different side of the blocks. By cleverly changing perspectives it’s possible to reach previously inaccessible areas, and that forms the core point of the game – reaching the inaccessible areas to obtain little golden cubes to open the way to the next level. 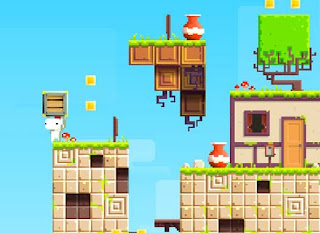 And yes, the levels are well designed to be both puzzling and engaging without being frustrating. There’s a helpful map system to prevent people from getting too lost, and the game has a way of throwing new ideas and interesting things to look at right through to its conclusion. I doubt anyone will be outright bored by this game.

But it’s not without its source of problems. The deliberately retro art style for instance might be in vogue amongst indie developers at the moment but rarely is it done with so little personality. Graphics are bright and cheerful for the sake of being bright and cheerful. There’s the usual indie retro nods towards popular games of yesteryear such as Zelda (yeah, Japanese games really suck, don’t they Fish?) scattered throughout the environment, the nostalgia is designed to engage players with the warm fuzzy feeling of personal history, but in this case it simply reminds players how comparatively bland the world of Fez is. Stacked up against the likes of Cave Story and VVVVV, Fez feels like it’s trying too hard to wear the retro suit, rather than simply slotting in comfortably. 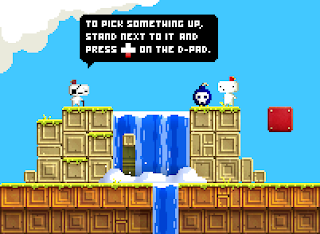 As the game leans heavily on the side of “puzzle” in the puzzle platformer genre it’s a bit of a slow burning game, and there’s no time limits and relatively little pixel perfect platforming to deal with. That much is fine. What is less acceptable is some small technical errors that make the game feel genuinely slow. The simple act of opening a door to go to a new area (and this happens a lot) takes too long, for instance. Opening a chest is similarly patience-testing, Zelda reference or no. These sound like small criticisms, but we were promised an unparalleled experience from a man who knows better than an entire industry, and and experience that drains the patience with small technical faults is not unparalleled.

If you’re going to come up and say an entire industry and game development process “sucks,” you had better hope your own games stack up. Sorry, Fish, you can be as arrogant as you like but being amongst the top of the indie pack with a well-made but vanilla game does not qualify you to comment on how the Japanese make their games.

Call of Duty: The hype train kicks off; May 1 announcement