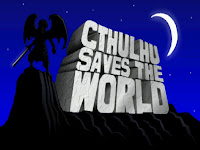 Zeboyd’s quirky indie RPG is celebrating its first anniversary, but that’s not the only news. Previously released on PC and Xbox 360 (via the indie games service), Cthulhu’s adventures in Cthulhu Saves The World will soon be available to a much wider audience on the iOS, Android, and Mac platforms.

There is no announced release date for any of the three platforms as of yet, but we do know that Tinkerhouse Games will be involved with the porting.

While you`re waiting, why not check out our interview with the man behind Cthulhu, Robert Boyd?