The worst game on the Nintendo Switch. No, it's not funny.

I find the concept of the succubus to be fascinating. As a symbol of the sheer terror with which Christianity views sexuality, the succubus is surprisingly important in terms of understanding the religion. Meanwhile, the contrast between desirability and danger inherent within the creature makes it evergreen content for both the arts and adult gaming. It’s also one of the rare creatures that is still allowed to be sexual in mainstream entertainment, precisely because it would be utterly pointless otherwise. Even Dungeons & Dragons, a game that has become so sanitised to appease the puritanical elements of American hobby gaming, allow the artists to unleash those few times that have no choice but to include a succubus in the game. I say all of this because Succubus With Guns makes me want to put on a capotain instead. That’s the puritan’s hat, in case you missed my excellent joke there.

I wasn’t expecting much from Succubus With Guns, but I was hoping for two things, and if the developers had managed to get them in there I would have been happy overall: I was expecting something sexy, and also something that was, in some way, playable. You play as a succubus who, as far as I can remember, has no name whatsoever. She doesn’t talk, think, or emote, so her personality is “leotard that barely holds the bits in.” This “demon” needs to run around small arena-like areas, killing waves of things, before moving on to the next level, where she’ll do the same, just in a slightly different-looking arena. 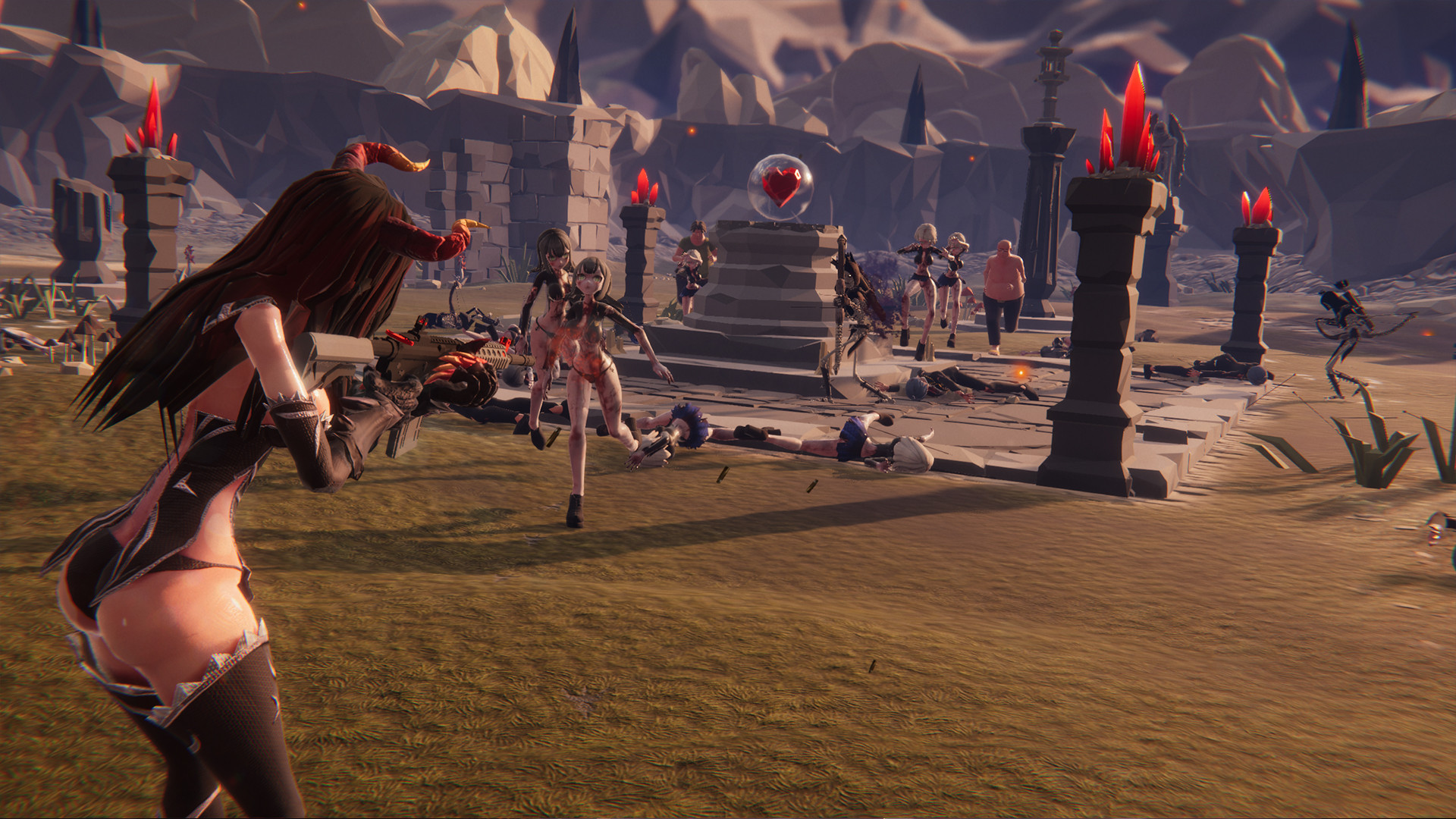 Enemy AI is so ridiculously broken that enemies would just randomly run away from you, or refuse to even attack. In fact, that happened far more often than the AI getting its act together long enough to take a swing. This includes the bosses. Hit direction is so broken that you only need to vaguely point the gun in the direction of your opponent to be able to damage them, but that’s just as well because the aiming system is so clunky that it’s pointless to even try and aim at something. Movement around the level is fine, but there’s a duck command that seems pointless. There’s no need to duck since you’ll never be stealthing or otherwise needing to keep a low profile. The existence of this function suggests that the developers have no idea what game they even made and just ended up throwing it onto the market rather than trying to figure it out. Finally, you can dodge out of the way, but the delay that comes between pressing the dodge button and the dodge actually being executed on the screen is so extended that it would be functionally useless even if it was ever necessary to dodge enemies. But it generally won’t be, because the AI frequently has no interest in threatening you.

Perhaps more grievously of all, though, is that the game just does nothing with the theme. Hentai Vs. Evil, which actively aimed to be a smutty trash game, had both trashy costumes and nudity to deliver on the promise. You got a smutty trash game. Succubus, meanwhile, is barely more edgy than swimsuit DLC, and that isn’t even close to being representative of the succubus myth. Yes, there is boob physics, which is, of course, terribly implemented and more closely resembles jelly bobbling about in zero gravity to a woman’s breasts, but a succubus should be the extreme end of an eroticised kind of horror. The developers painted themselves into a corner with this protagonist a bit, because a cheap, Unity-bought character model with horns, bounce physics and a poorly-fitting leotard is not a succubus. She’s not sexy, and only horrific in the sense that it’s that much of an insult to aesthetics.

It’s not like a developer would need to put that much effort into something like Succubus With Guns to give it a point. A more provocative art style, backed with some short cutscenes before levels, would have been enough to add context. There are other smutty action games, like Onechanbara, School Girl/Zombie Hunter and Dead Or School that are all excellent despite not offering much further than that. You don’t need much effort to pull off smutty B-grade exploitation, but you need something. 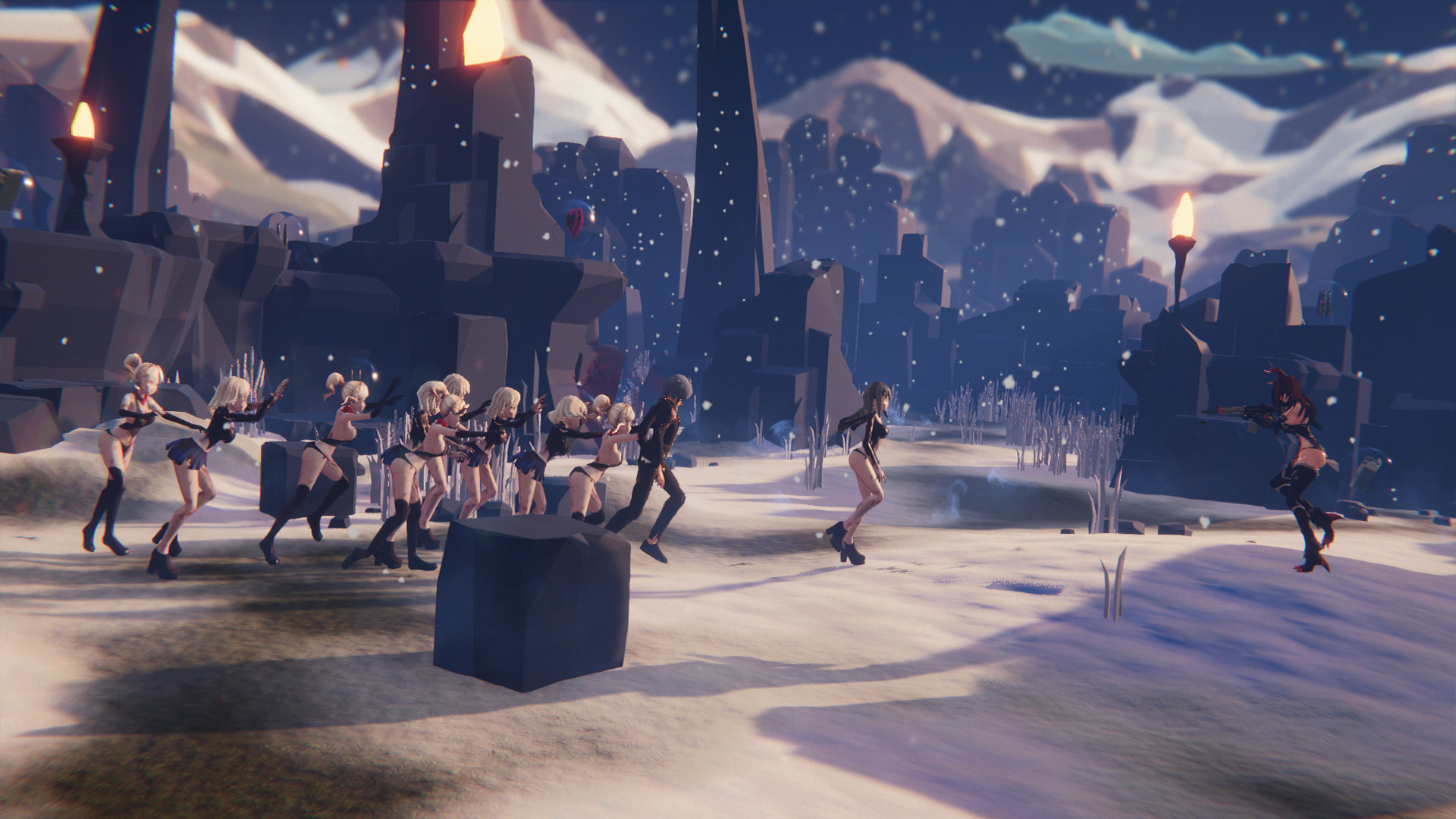 As I think just about everyone knows, I like fan service. Put Hatsune Miku in a bikini or lingerie and I’m giving the game 5/5. My favourite fighting game series is Dead or Alive and yes, I end up with all the DLC for a reason. More than a few of the Dee Dee Zine covers outright celebrate the joy of fan service using my own characters. But the thing about fan service is it only works if you’re a fan in the first place. I do think some game developers have a weird idea that a semi-naked girl is inherently set to sell bucketloads because sex sells. In practice, though, no one cares. There are so many digital waifu bait games out there that absolutely no one is going to care about a nameless, personality-free, cheaply built character model, in a game so broken you’d barely call it playable. People have standards.

In short, the only thing Succubus With Guns has going for it was the most generic fan service you can imagine, and no one’s going to care about that. Not when Google and the key phrase “Rule 34 XXXX-Favourite Character-XXXX” is right there. It’s stuff like this that gives artful (or sexy, or just plain fun) fan service a bad name.

The complete version of Mugen Souls is coming to Switch worldwide