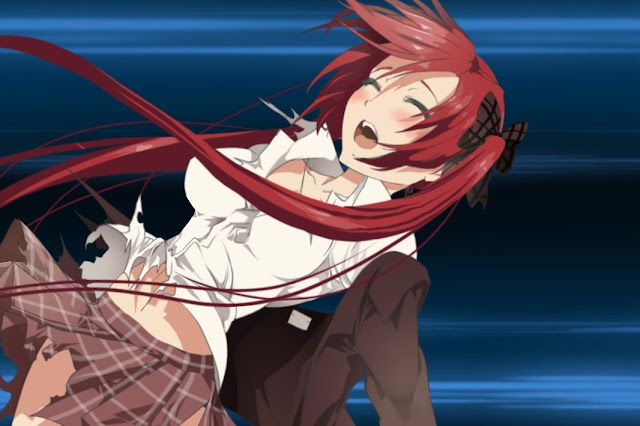 (Note: We have previously reviewed this game on Nintendo Switch as a Japanese import. However, with the game getting a formal western release, we thought we’d re-publish the review for those that are curious. Having tested the PlayStation 4 version now, it is effectively the same as the Nintendo Switch release).

You’ve got to hand it to the development team behind Dead or School. Despite the Indiegogo campaign to fund the game failing spectacularly back in 2016, the small team has persevered and managed to get the thing over the line. It’s not bad, either. Dead or School is, as you can no doubt guess from the art work and design, a fanservicey action JRPG, and it’s a bit like what the Russian shooter series, Metro, would be if the characters in Metro had giant anime boobs. It’s by no means great, but it’s very playable and playful.

Related reading: School Girl/Zombie Hunter is the pinnacle of school uniform tearing sexploitation horror. My review of it on PlayStation 4.

The world has been beset by a zombie-driven apocalypse that has driven all remaining people underground, into the subway system of Tokyo, where they now eke out a miserable, dark life. I told you it was like Metro. Also just like in Metro, the protagonist has a yearning and curiosity to see the surface world and sets out on a quest to do just that. Unlike Metro’s Artyom, however, Dead or School’s protagonist, Hisako, wants to see the surface so she can wear cute school uniforms and go to class with her friends. Just roll with the premise. It’s meant to be silly and ridiculous, and an obvious contrivance to have a girl running around a subway system wearing a tiny short skirt and blouse that is easily victimised by a zombie’s claws. 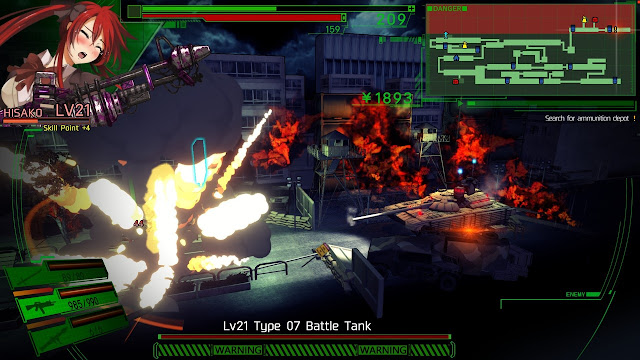 Along the way Hisako needs to rescue people in distress, and she slowly amasses a large group of people to help her on her journey to the surface. Mechanically, this gives Dead or School a Metroidvania-like structure, whereby some areas are locked off until you’ve rescued a person with an ability to clear the path for you. More to the point, though, the structure allows Hisako to act as a true airhead on a naive quest to go to school, and for her to somehow recruit an entire cadre of people to join her on this nonsense. It’s not great storytelling by any means, but it’s amusing and charming in the way it revels in its nonsense.

Thematically, Dead or School is clearly a homage to the same B-grade “sexploitation” horror cinema that inspired titles like Onechanbara and School Girl/Zombie Hunter. Hisako’s clothing rips in every fetishistic way you could imagine as she takes damage, cut scenes give you plenty of quality panty shots, and there’s also the obligatory scenes where a character gets caught or trapped and it’s hard to tell if the zombie’s looking to eat her brains or just bleep them out. It’s trashy, grindhouse stuff, and as it’s as self aware and satirical here as it is in those D3 titles, it generally gets away with being amusing.

With that being said, Dead or School is also wildly inconsistent in tone, and that lets it down. With the aforementioned D3 titles, the B-trash stuff is in your face from start to finish. Those are 3D games, and as such, every frame is filled with the sexploitation. Just as Marquis De Sade’s books are not 90 per cent banal in between the 10 per cent of explosive, eye-opening excess, and instead hit you over the head over and over again, tonal consistency is critical in this particular sub-section of the art world, in order to maintain both aesthetic and thematic tone. By comparison Dead or School’s 2D side scrolling stuff is almost completely stale. The character models are small and simply animated, and greatly lacking in detail. It’s only in the short cut scenes where the visual engine matches with the grindhouse themes, and that inconsistency does ultimately let down the game’s satirical atmosphere and tone. 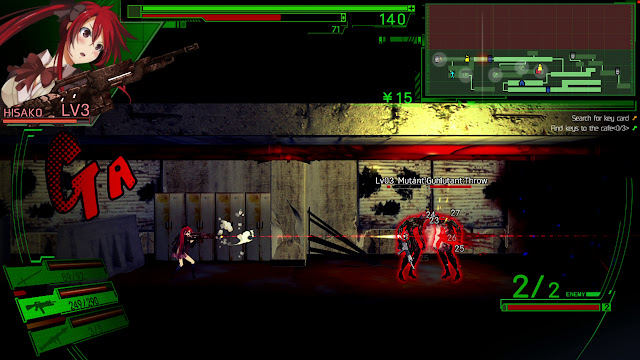 It plays nicely enough, however. Hisako brings three weapons into combat – a melee weapon, a machine gun, and an explosive weapon – and every so as she explores often she’ll need to batter down a couple of waves of enemies using a combination of these weapons. The customisation and upgradability of the weapons is impressively complex, and where Dead or School draws its JRPG credibility from. Hisako herself only has a limited skill tree to customise as she levels up, but the weapons have all kinds of effects, and status boosts, and so on that can be applied to them using the materials and loot that you’ll find along the way.

You’ll need to master all of the weapon types, too, because each has a durability rating, and save points (where the durability of weapons is restored) are generally just far enough apart that you won’t be able to rely on a single weapon the entire time. Hisako is also a usefully nimble character, which comes in handy with boss battles and the attack patterns that they have, But you’ll need to be careful, because it doesn’t take long for her health to whittle down and her uniform be torn to shreds. I’m not great at this particular kind of action, so the generous checkpointing system was greatly appreciated, though I wouldn’t say that Dead or School is an overly difficult game.

The enemy variety is really great, too, which helped me push through the more mundane moments. Bosses can be gigantic and fill the screen with pyrotechnic-heavy attacks. Regular enemies are only dangerous in mobs (and have terrible AI to back that up), but as you explore you’ll also come across the occasional “powerful” enemy, which tends to be both fast and deadly. The enemy variety helps to make up for the lack of variety in the environments. The developers tried in some areas, giving players decrepit underground shopping malls and the occasional above ground zone to capture the Japanese aesthetic, but there’s a general lack of personality in the world of Dead or School. It’s too clearly a series of arbitrary levels that have been designed for platforming and action, rather than an exercise in world building. 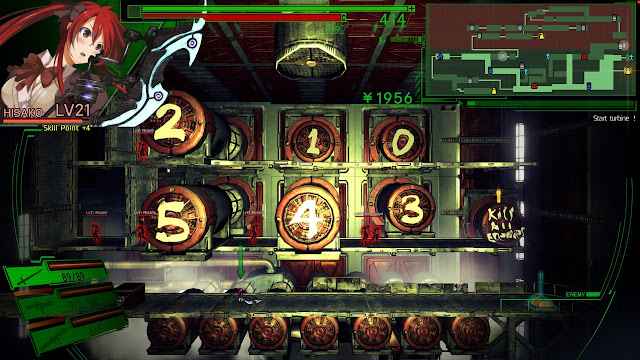 As something of a budget entry into the same genre occupied by Onechanbara, Dead or School is decent fun. Being a budget game it struggles to maintain a consistency in tone and experience, but a solid loot and upgrade system, some great boss fights, and a good sense of humour, all help to see it through.

On Dead or School and Japanese school uniform fan service