Typing isn’t entertaining. I write 100,000 words in a typical week. The idea of playing a game with typing as the central mechanic doesn’t scream “entertaining downtime” to me, on the face of things. Yet actually sitting down to play one of these things is an oddly compelling experience. The famous Typing Of The Dead is an all-time classic, for example, and while Outshine isn’t quite to that standard, it’s a good time in its own right.

Outshine is a straight-down-the-line arcade game, with an aesthetic that seems to sit somewhere between Tron and that Thumper rhythm game from a few years ago. Your avatar is a dude running down a pathway, and along the way, he comes across a series of hostile threats. Those range from relatively passive obstacles in the way to all kinds of flying, floating, and shooting enemies. Each enemy has a word floating above its head, and to defeat the enemy, you simply need to type out the word. The faster you type, the more enemies in a row you defeat and the fewer mistakes you make, the bigger your score will be at the end, and naturally there’s an online leaderboard so that you can prove that you’re the most effective typist of them all.

It sounds simple, but this is no static Microsoft Word document that you’re looking at. Enemies move around the screen, there are multiples on screen at once, and some of the words can become really quite complex and unusual to type out. In the thick of the action, you’re not really going to have time to look down at your keyboard, so if there’s one skill that Outshine really tests it is your touch typing skills. It’s also great practice for exactly that skillset as a consquence. 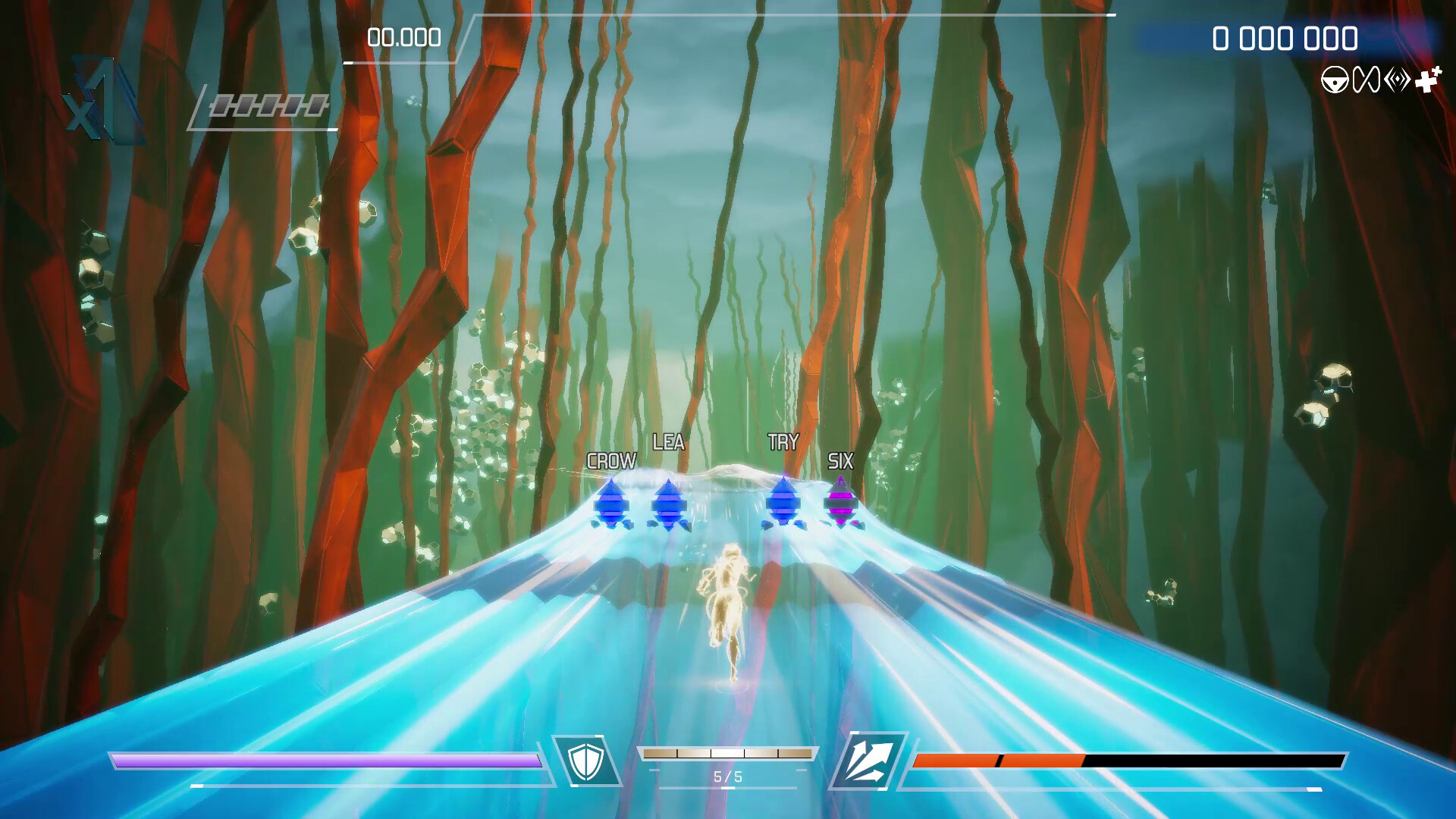 In addition to tapping out words, there are a couple of other inputs you need to be aware of. The shift keys will move your avatar from left to right, which can be important to get out of the way of an obstacle, but can also disrupt your typing flow. Occasionally, too, you’ll need to pull up a defensive shield using the Tab button. There’s also a button for a missile attack, which is exactly what it sounds like. If I’m being honest, I find these inputs to be superfluous and add an unnecessary level of chaos to proceedings, but I’m sure that others will appreciate the additional skill that is required to split attention between dodging and using abilities and aggressively attacking (i.e. typing).

The difficulty is tied to the number of words per minute the game will ask you to type. The lowest difficulty setting sets it at 20 WPM, and this surprised me. Factor in the occasional glance down to the keyboard and the effort to avoid the obstacles, and this “easy” setting is still beyond the casual two-index-finger typists. The highest difficulty is 100 WPM, and that is absolutely absurd to struggle with. Yes, the fastest typing ever recorded is something like 216 WPM, but the average speed is actually only around 40, and the conditions of gameplay in Outshine mean that you’re not going to be anywhere near your fastest. For context, my own typing speed under optimal conditions is around 115 WPM (when I’m writing my own copy), and 80 WMP (when doing one of those typing tests where you type out paragraphs given to you on screen. In Outshine I was really struggling at the 60 WPM setting. 100 WPM in this game is truly hardcore stuff, and I doubt many people would be comfortable there at all. However, it is great that the option is there, since people who can type in this game at that speed deserve the opportunity to show off.

If you do happen to end up finding 100 WPM too easy, there are things you can do to make things even more difficult, including turning on an “instant kill on the first mistake” option. Anyone who has ever seen my writing in draft form would know well that such a setting would be the end of me. Still, if you’re that good, you will rocket up the leaderboards, because the more difficult you make things, the higher the score. 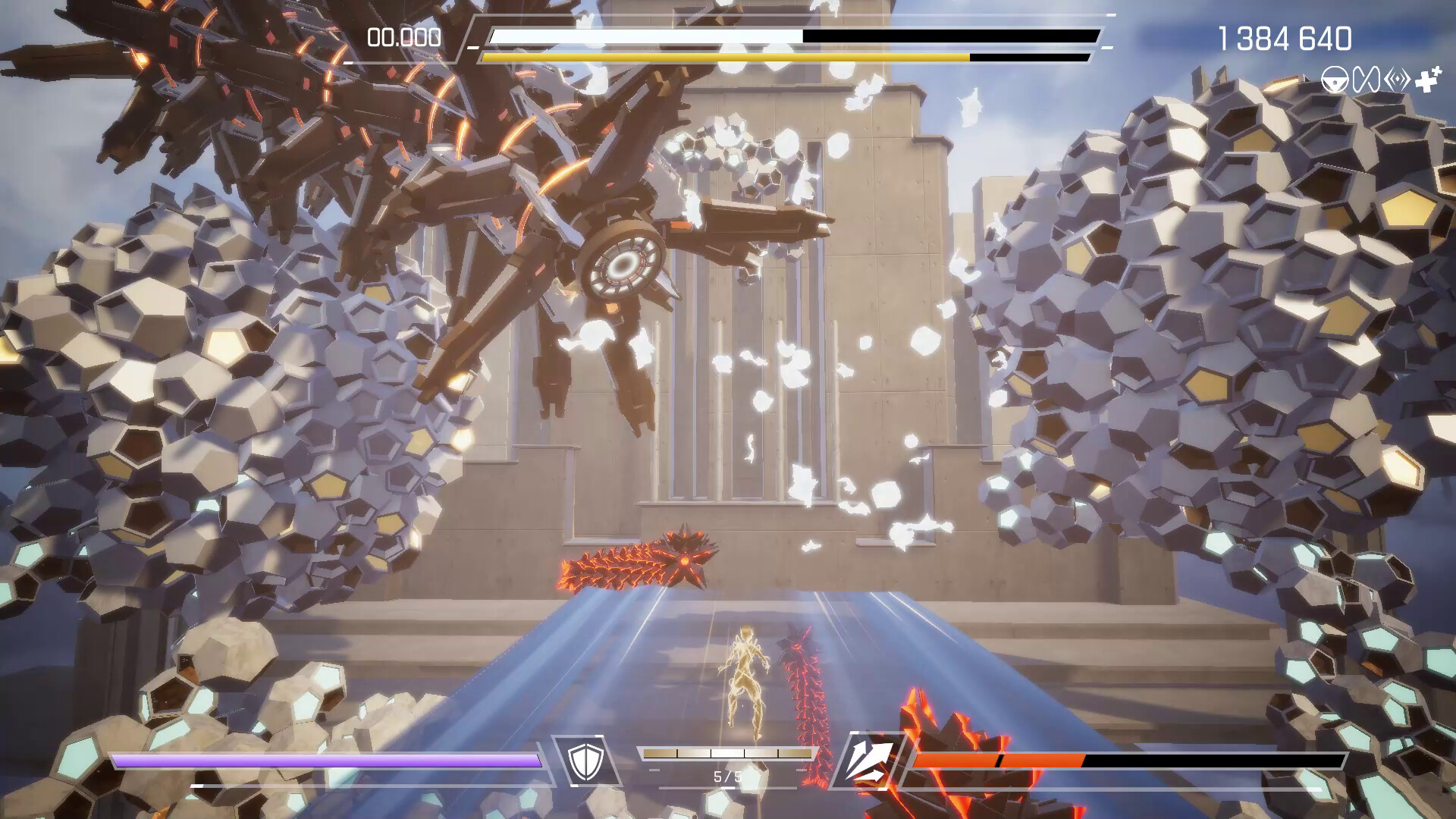 The developers did try and put something that resembles a story in the game. At regular intervals, your guy stops running down the pathway, and you need to type out a couple of full sentences that put some kind of narrative in there. I didn’t really pay attention though, so I have no idea what is really going on with that plot. There are a good number of levels, though, arranged across a number of themes, each as surreal as the last.

I do have two complaints with Outshine, and unfortunately, they are both significant. Firstly, the screen can get far too busy for its own good. When there are letters flying all over the place thanks to mobile enemies, explosions from you typing things right and defeating enemies, and things to dodge with your avatar, it can become hard to see anything. Something of this nature doesn’t benefit from making the words themselves arbitrarily difficult to see, let alone type. That’s just frustrating when that happens.

Also, developers, for the love of Hatsune Miku: American English is not the same as the English the rest of the world uses. I type in Australian and have been doing so my entire life. It might seem small, but examples like “armour” and “colour” lacking the “u,” and half the words with an “s” being turned into words with a “z” throws a person like me. If you’re going to put players in an action-pressure situation to test their spelling and typing abilities, don’t ask them to spell things in a way that is, from their perspective, completely incorrect. And, if you are only going to have one version of English in there, perhaps consider that more people in the world use UK English than US English. 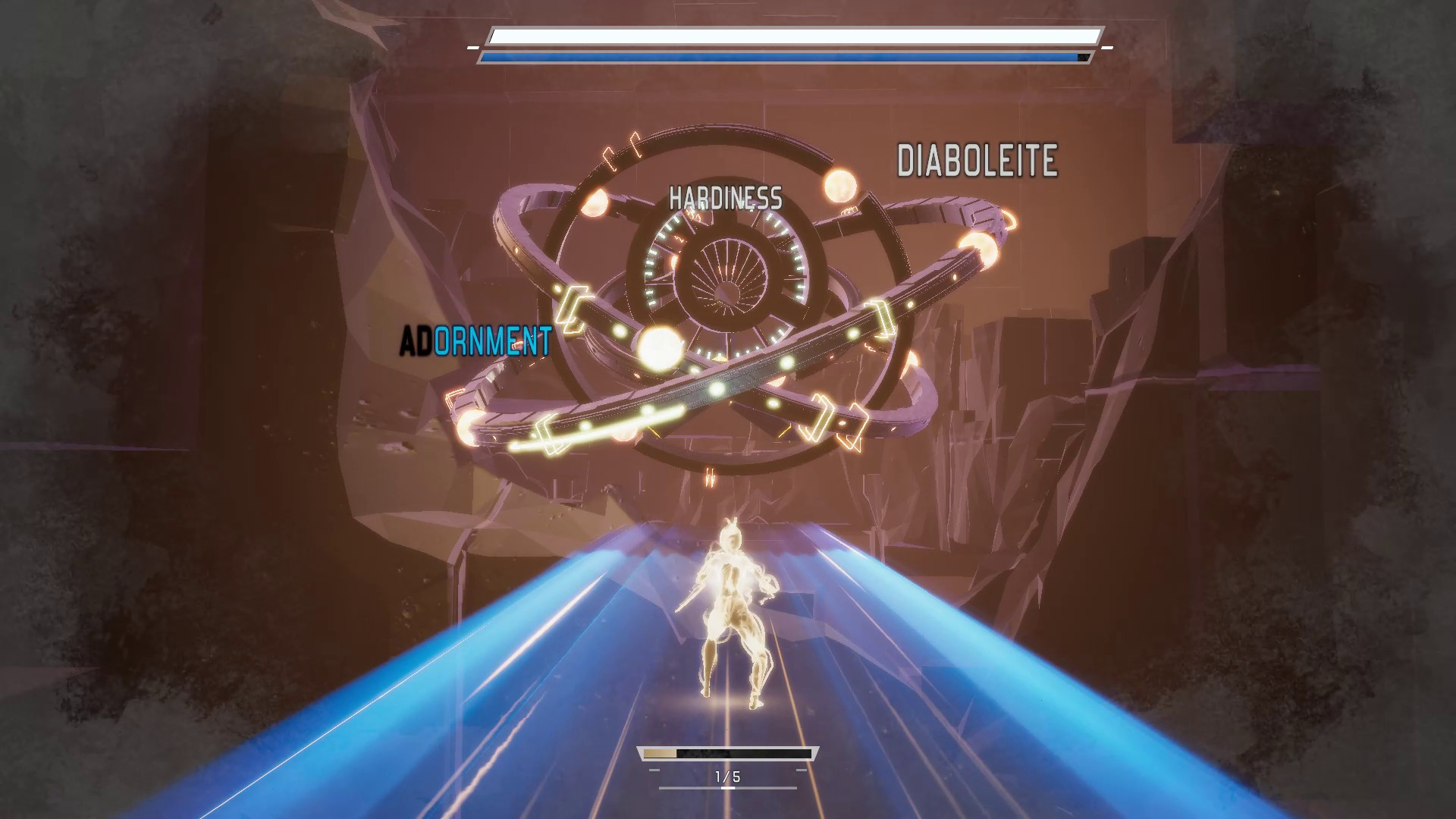 The game actually has German and German (Switzerland) options, so I can only assume that there are regional variations there and the developers were good enough to recognise that. Give us an English (UK) option, thanks. I’ve been wanting to bring up the irritating way that the games industry defaults to American English for some time now, and this game is a perfect, if extreme, example of why that actually does matter to the experience.

Those irritations aside, I really had a good time with Outshine. It offers a slick typing challenge with a solid wall of difficulty for the hardcore to sink their teeth into. There’s also the simple reality that a game like this doubles as an educational application, as it teaches speed and accuracy with typing, as well as the ability to touch type. These are all increasingly critical skills in modern society, so that’s an important added bonus with Outshine.