Proof that games only get better when you add cards.

It’s really disappointing that Square Enix would dump the third Voice of Cards release in the middle of such a jam-packed schedule. Even from Square itself. The company has released DioField Chronicle, NieR Automata on Switch, and Valkyrie Elysium in the span of just a few weeks and it has more to come with Star Ocean on the immediate horizon. What hope did the third Voice of Cards, subtitled The Beasts of Burden even have? It’s especially a pity because The Beasts of Burden is the strongest title in the series yet.

Related reading: Our review of the first Voice of Cards title: The Isle Dragon Roars.

The game follows the same basic concept as the previous two Voice of Cards titles. This is a full-scale JRPG in which everything is represented by cards. Everything. The heroes and monsters that they fight are all cards. The world and dungeons are built out of cards. The storytelling is conveyed through – you guessed it – cards. About the only element of the game that isn’t shaped like a rectangle is the dice that you sometimes toss down, but that’s a forgivable divergence from the theme given that it reinforces the tabletop quality of the game.

Voice of Cards feels very much like what you might expect if you were to buy some kind of “solitaire tabletop RPG” card deck, and it is consistently lovely in the way it speaks to that aesthetic and quality. Each of the three chapters so far has offered self-contained little stories, too, like the old-school Dungeons & Dragons modules, taking you all over a fantasy universe and allowing you to discover more and more of it with each new adventure. I suspect that the creative teams working on these titles have spent a lot of time playing D & D in their time. In Voice of Cards it’s the storyteller’s voice that relates the narrative to you as you play that really completes the picture. If you close your eyes you could easily imagine yourself sitting at an actual game table, participating in an adventure. 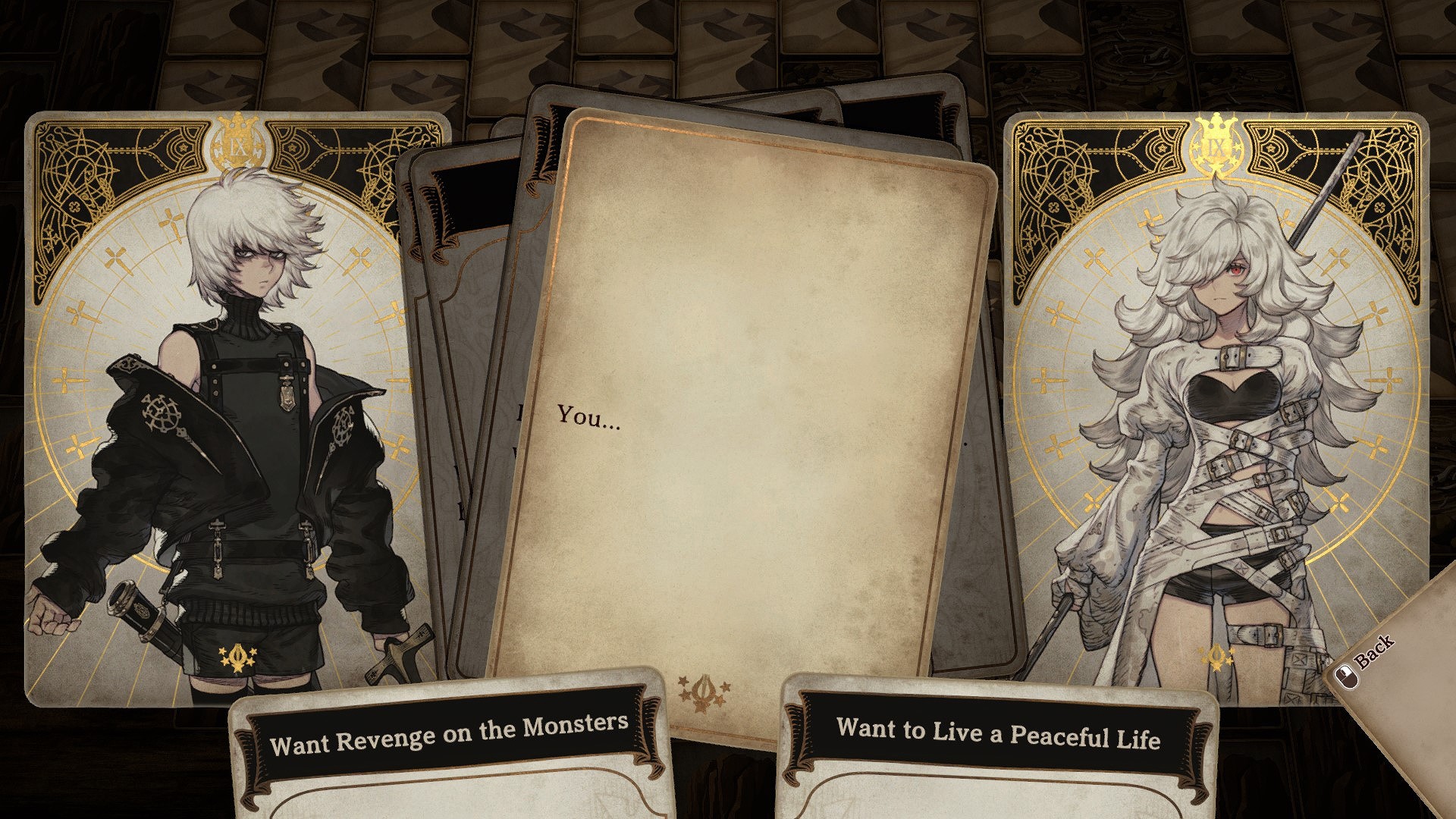 While all Voice of Cards titles share aesthetic similarities, they do all have quirks of their own in terms of how they play. The first point of difference is, obviously, the narrative. Each title has its own story and characters, and while they’re all pulpy and straightforward fantasy adventures, they’re also all written so well. Beasts of Burden is no different in this regard, weaving a story of burning hatred and revenge that starts out with a pretty shocking scene and then plays out in a riveting way. A true “page-turner” to crib a term from literature. The second unique quality that Beasts of Burden has to separate it from its predecessors is the monster collecting element. As you defeat monsters you may have the opportunity to recruit one as a post-battle reward. Each of these monsters gives you access to new attacks or buff abilities, and they have ratings from one to five stars, with the five-star cars naturally being more powerful.

Related reading: Our review of the second Voice of Cards title: The Forsaken Maiden.

You can only take three of these into battle with you, but it’s fun collecting together a full deck and then figuring out combinations of cards that will give you an optimal advantage in combat. As it effectively stands in for the skills system in most JRPGs, it is a nice alternative and interactive system that gives you a lot of control over how your characters develop.

Unfortunately, for some inexplicable reason, the developers undermine what is an interesting combat system by making it far too easy. You will be rarely tested in Voice of Cards outside of the boss battles (and even then we’re not talking about a Soulslike here). To make matters more aggravating, the encounter rate is right up there with the oldest of old-school JRPGs, meaning that while you’re exploring dungeons and landscapes, your adventure is constantly being interrupted by something that becomes quite mindless far too quickly. The chance of capturing the monster that you’re fighting at the other end makes the end of the fight rewards slightly more exciting, but it’s still not enough to save this combat system from becoming too rote for its own good. 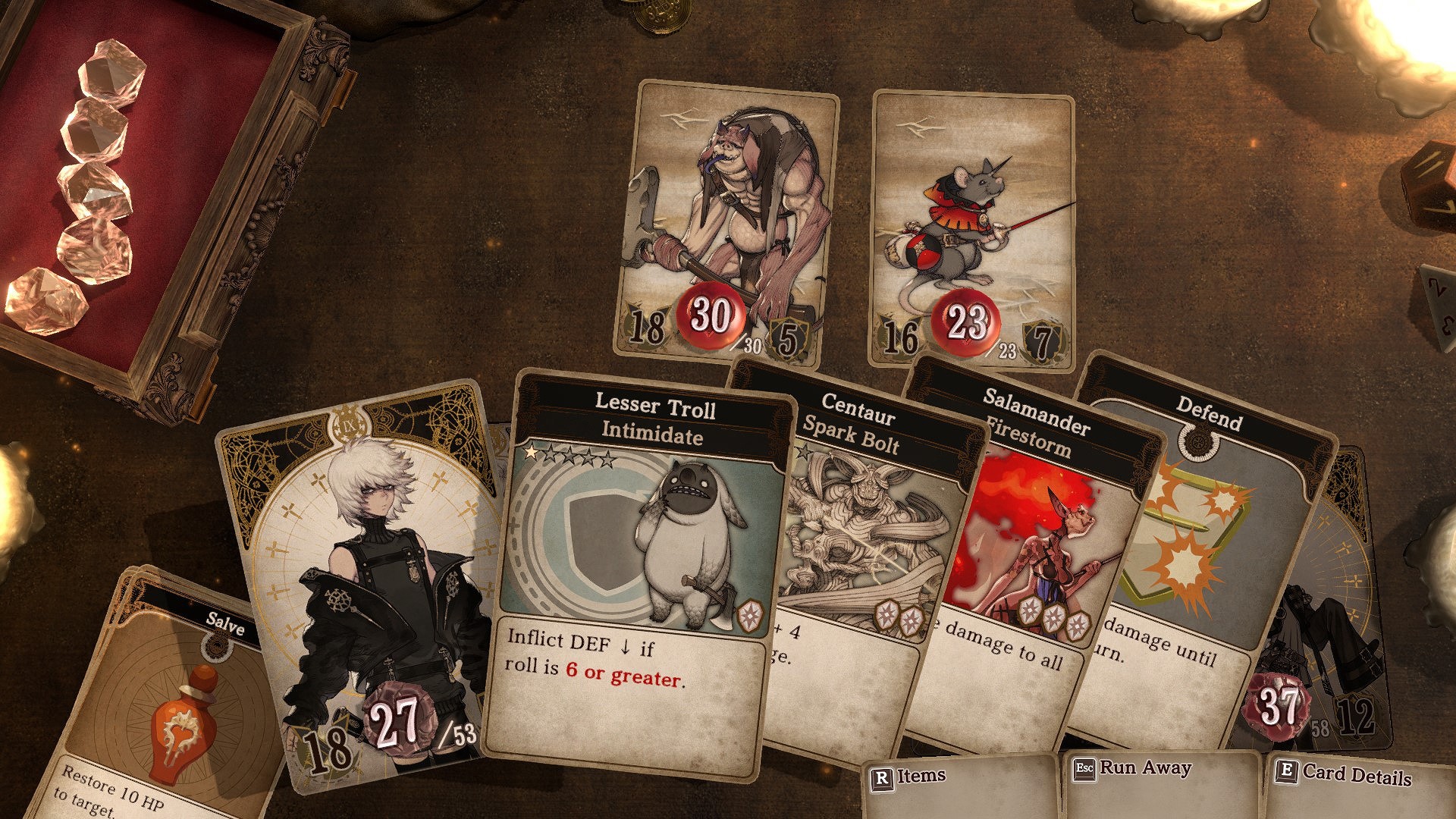 There’s really not much else that can be said about Beasts of Burden that I haven’t already covered in my reviews of the previous two titles (links above). There are small variations in the storytelling and the way the adventure flows, and there is that one big headline feature in the monster collecting, but the game is essentially otherwise the same as the predecessors. Perhaps this is why this game isn’t generating as much chatter this time around, but it’s not actually a criticism. Again to reference tabletop gaming, with Dungeons & Dragons, once you bought the core rule books, the adventure modules that you’d subsequently buy and play all used the same basic system. It was the stories they wove within the familiar and well-designed structure that made the overall hobby such a beloved one. Voice of Cards is the same. The development team have created an exceptional and robust foundation that they can use to tell as many classically pulpy stories as they like. How long this series runs will no doubt depend on whether it continues to sell, but certainly every “module” so far has been a delightful love letter to tabletop gaming and nostalgia for classic JRPGs.

At about 15 hours in length Beasts of Burden respects your time and moves beautifully from plot highlight to highlight. It’s the perfect “Sunday morning gaming” game to unwind with while enjoying a coffee and there’s a humble warmth and love for the genre that makes it difficult to criticise those small things that don’t quite work in its favour. Thanks to the monster collecting, this is the finest in the Voice of Cards series so far, but you really should play them all.