Bunnehs are the pets of the Gods.

Rabbits are the best pets. They’re fluffy and funny and it’s only when you have them as pets that you realise they’ve got big personalities that fill the home with their energy. We don’t get anywhere near enough games that make rabbits the focus, and many of those that do exist are ironic “but what if the rabbit was violent?” nonsense. Bunny Park aims to be different, and while it could have (and should have) been a lot more, it’s still quite sweet.

This is one of those hyper-casual games that are really just about slowly accumulating stuff (in this case, additional land and bunnies), and is an entirely laid-back, harmless experience. You start out with a small patch of land and one rabbit. The place is a mess, and you need to remove leaves, logs, and stones (for a bit of cash), before decorating it with all kinds of objects and filling it with plots of farmland to grow vegetables so the bunnies can eat.

Full bunnies are happy bunnies and they’ll dig up cash for you. Over time you’ll have enough cash to buy more land, put different plants and objects into the space, and attract more bunnies to the park. That’s really all there is to Bunny Park. 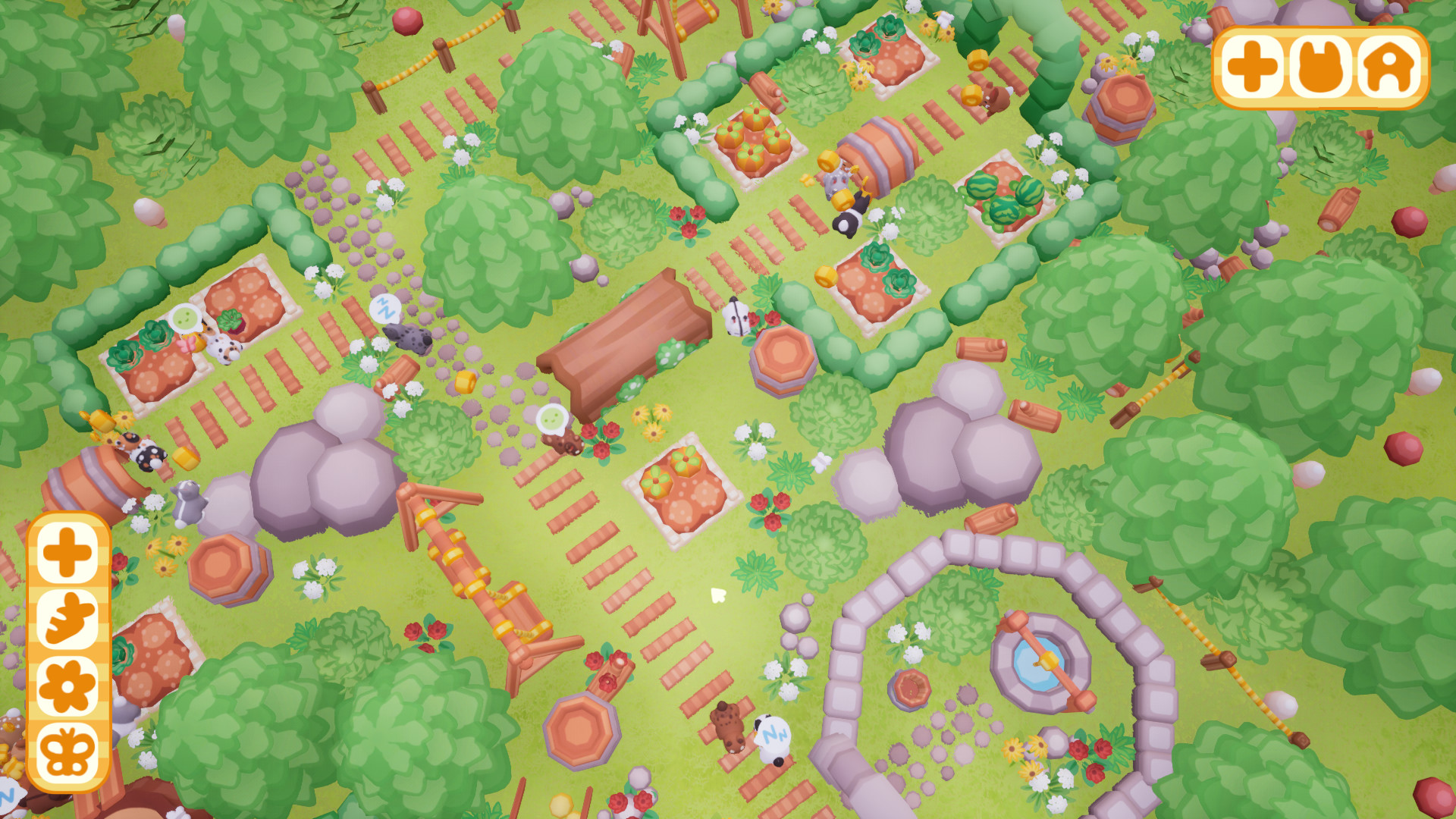 Unfortunately, the developers made a massive error, and for a game this simple, I’m surprised that it got through QA. To collect the coins that bunnies dig up, you need to scroll your cursor over the coin. Unfortunately, it often won’t register, and the coin will remain unclaimed on the screen. Sometimes after some frantic waggling, you’ll pick up the coin, but most of the time it’ll just time out and disappear, funds lost.

I’m pretty sure I understand what causes this: if the cursor could be used for anything else at the same time (i.e. the coin is sitting on some scenery that you can pick up, or a bunny that you can interact with), then the conflict causes the game to not register that the cursor is over the coin as well. Most of the time coins are picked up over “free” scenery, but the space in Bunny Park is quite busy, so more often than not the coins will appear on something and there will be a conflict. It’s maddening that the developers somehow managed to get the most important interface command wrong.

As a result, it’s incredibly slow going at first in Bunny Park, as you desperately scrape together as much money as possible, while watching coins continue to disappear around you. Things change, for the better, when you have enough to buy butterflies, which will automate the process of picking up coins for you. From that point you just sit back and enjoy the ambience as you putter about, making the prettiest park your creativity allows for, while the money automatically flows in. The problem then is that not much happens. The bunnies all have different colour patterns and are cute, so when they drop into the park for the first time it’s a delight, but there are only 25 of them, and they don’t do much once they’ve arrived. Really they just hop around, sleep, and a little heart bubble appears over their heads when you click on them (to simulate petting them). Another chilled-back bunny-themed game, Bunhouse, does a far better job of giving you a reason to care about your little buddies.

There’s nothing offensive about Bunny Park. Even the UI issues aren’t much of a bother given that there are no lose states and no time pressures. If you miss out on money because the cursor doesn’t pick it up, you just wait for the next money to come along. It’s only ever a second or two away.

Unfortunately, there’s no real point to playing Bunny Park, either. If the bunnies were more than cute little collectibles, and has some kind of personality, it would be one thing. If there was an Animal Crossing-like approach to progression it would be another. Really, though, you’re just buying into a Farmville-like game with two dozen hopping furballs, and while that’s inherently pleasant and happy, it doesn’t make for a game that is particularly memorable or has any longevity or replay value.

Jump onto a hostile alien planet in Scars Above