This one will make your eyes pop right out. WB cartoon-style.

Seven Pirates H has hit my limit. I am more than happy to whip out Dead or Alive Xtreme 3, Gal*Gun, Hyperdimesnion Neptunia, Nekopara, or any other fanservicey Switch game that you can think of on the train or any other public space. I just don’t care if people look over my shoulder and get offended. I haven’t cared about that since the days when I was a uni student, got chewed out for reading Marquis de Sade on the train for coursework I was doing at the time, and realised that what people think about the books I read or games I play just doesn’t matter. But I’m not going to play Seven Pirates H in public, ever, and I love it for that.

Related reading: Our review of the previous game in this extended series by Idea Factory, Moero Crystal H.

It’s not the CGs that pop in to introduce characters and highlight key moments, though the artist behind them had way too much fun designing scenes that show as much of the character’s boobs and crotches as much without showing the tiny last 1 per cent that would get the game relegated to “adults only” territory. The creativity in those CGs really is something else. It’s not the character designs, either, though each character may as well be naked for all the coverage that their costumes provide. Nor is it the enemies, most of which are some creative phallic reference.

No. It’s not any of that. It’s the levelling up system that does it. Rather than characters just levelling up, once they have enough experience for a new level, you get to jump into a minigame where you massage their breasts in various directions to improve various statistics. Squeeze them together to boost one stat. Push them apart to boost another. Push them up for a third. You’ve got a lot of control over how your characters develop (both in terms of their statistics and, quite literally, what their boobs look like), based on how you like to play with their bodies. It’s an eye-popping levelling system, but it’s also kinda innovative. I mean, even Elden Ring doesn’t have that. 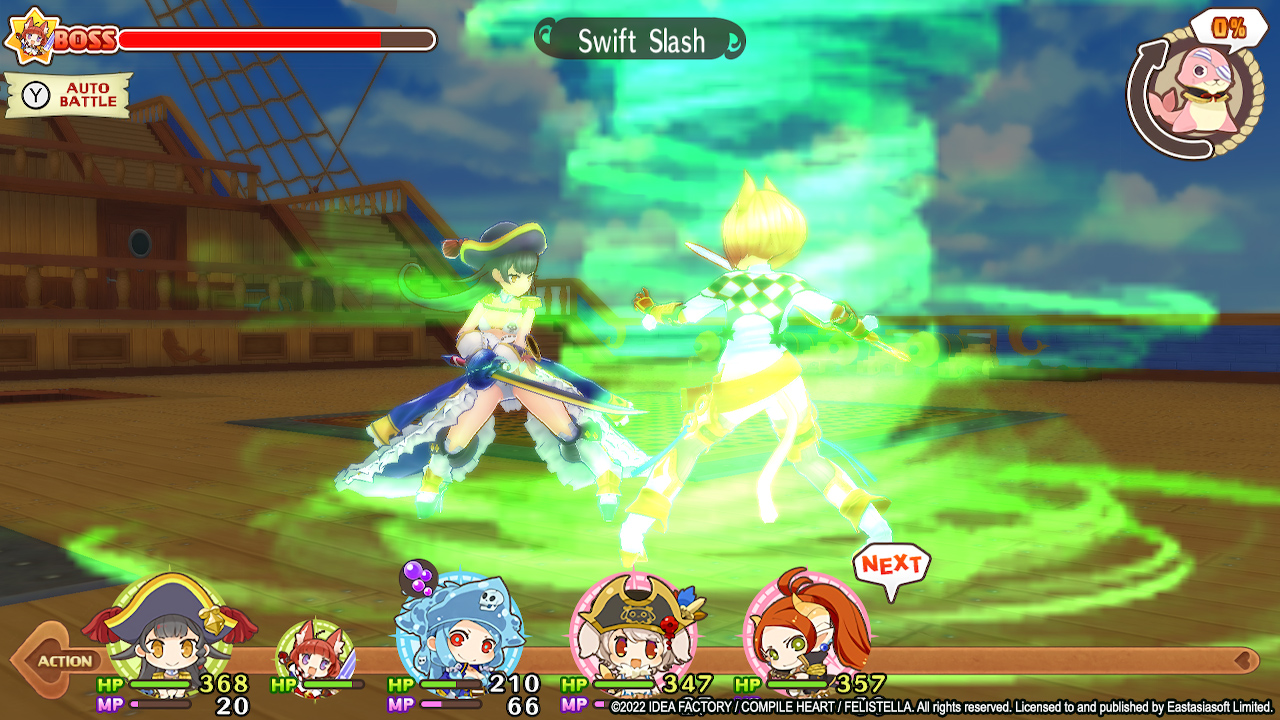 And yet that’s not even the furthest it goes. Oh no. Seven Pirates H’s pièce de résistance is its little parody of gacha mechanics. You’ll never actually pay real money for these (it’s just a mechanical system), but as you defeat enemies, you’ll earn eggs. These eggs might hold valuable treasures. To find out you drop back into the boob massage minigame. This time around, the egg is placed between the girl’s boobs, and you need to spin them around so that they crack and break the egg. If you’re lucky you’ll get a really good super rare item. If you’re unlucky you’ll get nothing, and the girl will be covered with “egg”. By which I mean a sticky white liquid substance that very much doesn’t look like egg.

So. You’re now either rushing out to buy this thing, or you’re about to write an email to Nintendo complaining about how the company once famous for puritan values is corrupting the minds of the youth, men, and anyone else that might enjoy the game. It’s almost irrelevant what the game is like beyond that. The eye-popping fan service is so out there that it’s impossible to look at it and not fixate on it as the focus of the game. It’s very funny, and clearly comes from the perspective of people that find sex and sex themes amusing. They are – sex is a funny thing – and Seven Pirates H, despite being so explicit, is also explicitly not trying to be titillating. It’s nothing like, say, Dead or Alive Xtreme 3, which is absolutely designed to be voyeuristic and aesthetically pleasing. This is instead a comically grotesque take on raunch, and it is funny. It’s also blatant objectification and you’d be an idiot to argue otherwise. So, without even discussing the gameplay or broader narrative, your mileage with Seven Pirates H is going to depend entirely on your ability to have a laugh at outrageous objectification.

The good news is that unlike stuff like Waifu Impact or Hentai Uni, there’s a genuinely entertaining game sitting behind the raunchy fan service. It’s not a particularly brilliant or innovative game, but it plays nicely and competently, and gives the necessary context to make the humour worthwhile. Seven Pirates H is a turn-based RPG in the vein of Hyperdimension Neptunia, Fairy Fencer F, or any number of other Idea Factory JRPGs. You run around smallish environments, bumping into enemies, and then defeat them through very traditional combat systems. Aside from some nasty difficulty spikes, owing to the game’s relatively brief run-time, this system is a lot of fun in the same way that turn-based JRPGs have been fun right back to the original Final Fantasy. 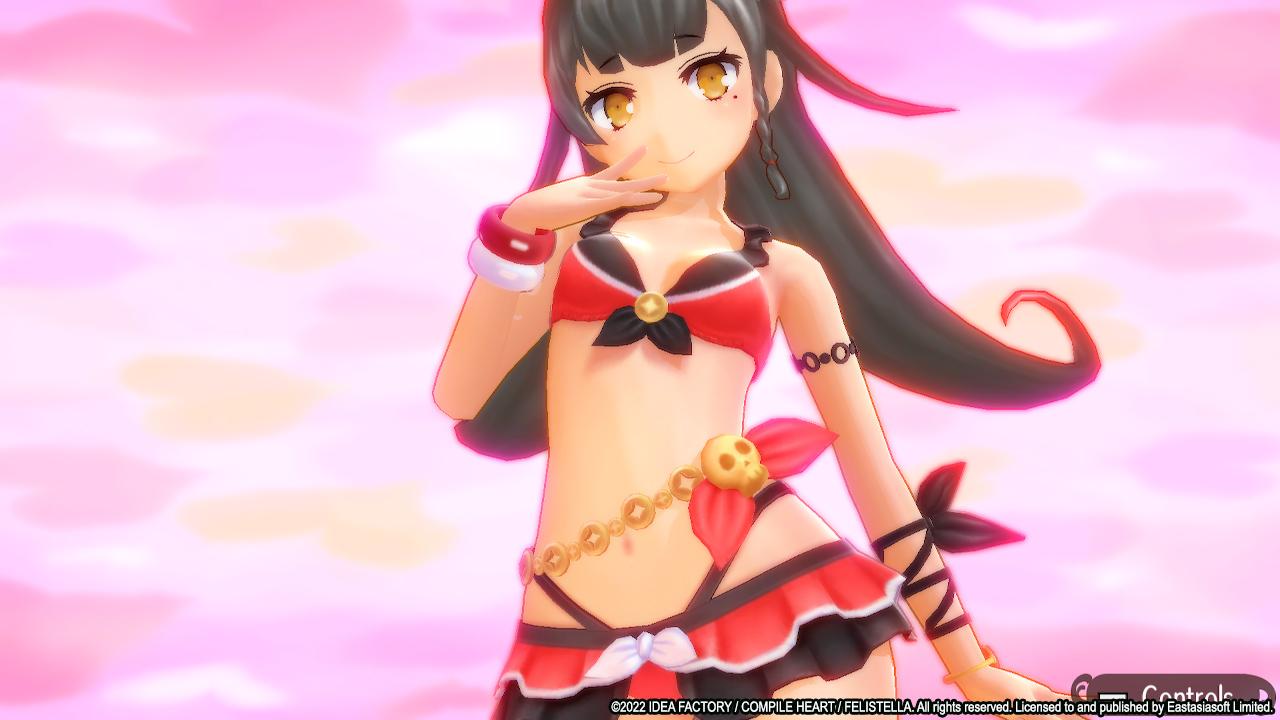 The one relatively uncommon element is the way magic and special abilities work. Rather than having a “SP” resource that drains with each spell cast, as with many even more traditional JRPGs, in Seven Pirates H, you instead get points as you damage enemies. This fuels lesser abilities, or you can instead choose to save those points up to reach a “limit” value. When you get to that point, the girl enters a state of ecstasy (i.e. she looks like she’s about to orgasm) and you can then unleash a Final Fantasy-like limit break, which comes with a rather spectacular attack animation and big-time damage. So there’s a bit of a risk-reward mechanic at play over whether you forgo lesser abilities to launch one of those things, though for the most part that level of “complexity” only comes into play with the boss battles. Common enemies can generally be bashed through without thinking about it.

Otherwise, Seven Pirates H works pretty much as you’d expect from an Idea Factory JRPG. The narrative is told through visual novel-like interactions between characters that can be very lengthy and don’t really go anywhere. Usually, characters are too busy talking about boobs and dealing with the psychotically perverted Otton the Otter to actually progress the narrative. If you were to somehow scrape all that grime off the underlying plot is a simple pirate adventure for treasure and friendship and would almost be cute were it not for… well, everything else about the game. There are also all kinds of side-tasks to complete, crafting systems and the like to play around with. Seven Pirates H is a slimline JRPG, but it has all the elements in there. It doesn’t do anything spectacular with any of them, but then it’s also not trying to.

I’m obviously the target market for this game. I like trashy fanservicey things, and Seven Pirates H, by virtue of being one of the trashiest and most fanserviey things I’ve ever played, just happens to be a really good example of that. Everything within the game is well-crafted in service of this one particular goal, and the result is outrageous, ridiculous and fun. This is the finest example of raunch humour on the Switch.