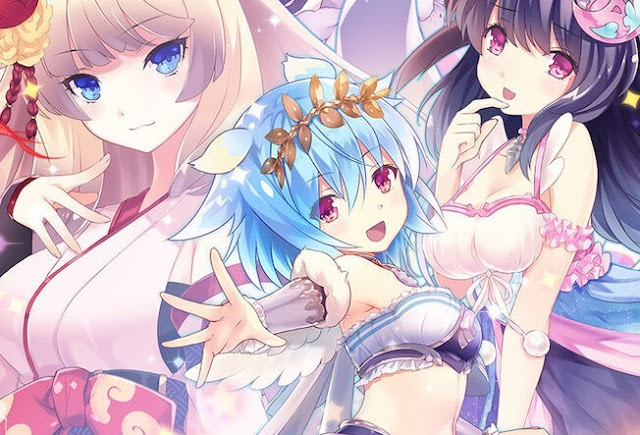 With Moero Crystal H we can crown a new king of fan service, and I really don’t know how this one got through the Australian censors (bravo, EastAsiaSoft). I could easily spend this entire review describing the ways in which Moero Crystal H manages to continually trump itself for the eye-opening innuendos, blatantly sexualised gameplay, and impossibly skimpy fan service… in fact, that sounds like a fun review, so let’s do just that.

Just quickly, before we begin with the key points of differentiation for this game, Moero Crystal H is actually a pretty decent little dungeon crawler. It’s hardly relevant to the appeal of the game, and no one is going to buy this thing for the dungeon crawling, but with that said, the labyrinths might lack the nuance of an Etrian Odyssey or the intensity of a Mary Skelter, but at that no-frills level the exploration is enjoyable, the environments are vivid, and the enemies strike a decent balance between challenge and progression. Also, there’s a condom golem, and apropos of nothing else I’ll mention in this review, I’ve been playing RPGs and JRPGs for 30+ years, both the pen-and-paper and video game versions, and I’ve got a particular fascination in constructs as enemies and plot devices. Brass golem, clay golem, wood golem, bone golem, demon flesh golem… you name it, and I’ve become used to it. Yet, despite my familiarity with the golem tradition, I still had never thought of a condom golem, nor encountered one in any other RPG I’ve ever played. Bravo, Compile Heart. You’ve just proved that it’s possible to surprise even the most bolted-on veterans of a genre.

But enough about the gameplay. You’re not playing this for the gameplay. You’re playing this for the monster girls, the rubbing mechanics, the costumes and, well, a SHMUP minigame that will replace Waifu Uncovered (also published by EastAsiaSoft) in doing the exact same thing as that game quicksmart. Moero Crystal H contains 86 monster girls to “collect”, and in their standard form they’re fanservicey enough. That is only the start however, because there are all kinds of costumes that you can acquire along the way with many of them being little more than stickers placed over certain parts of the anatomy. To collect those girls, you’ve got to first meet them in a dungeon and fight them down to a state of undress by strategically attacking their clothes. Then you’ve got to play a little minigame where you poke them all over their bodies, looking for three particular “weak spots” and then, having found those, you then need to rub the girl into ecstasy. Do all of that before a time limit runs out, and the girl will join your swelling harem. Miss out, and she’ll run away, and you’ll need to wait a while to find a new opportunity to meet her. 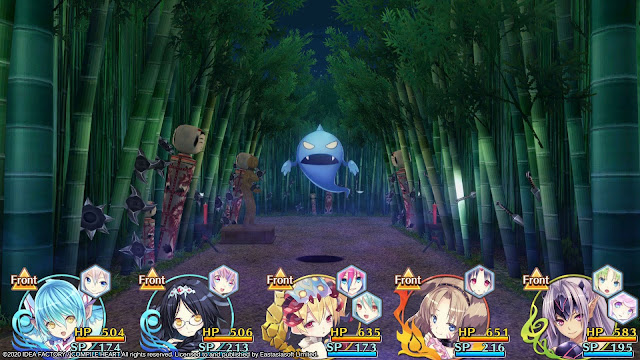 Then there’s the SHMUP moments. By spending time with the girls, giving them gifts, and chatting to them between dungeon delves, you’ll eventually reach certain levels of bonding that allow you to play a minigame, where you pilot a “spaceship” (overtly phallic even by phallic spaceship standards) and shoot great ropey lasers out its tip (yes) which act to remove the girl’s clothing. Get her naked enough and you can “dive inside her” (yes) and then complete a little dungeon crawl in which all the enemies are phallic symbols, with the goal of powering her up more.

And then there’s the narrative. Oh my, the narrative. So, there’s a goddess that has created the Panties of Light and Bra of Darkness, and in doing so, she brought balance to the universe and allowed the monster people and humans can live together in peace. But then a thief steals the Bra of Darkness and, in doing so, starts a doomsday clock – either the heroes reunite the Bra and Panties, or it’s end of times stuff for everyone. To make matters worse, the thief is able to turn the monster girls aggressive and evil through the power of the Bra of Darkness, and, even as you chase the thief down, you also need to take time out to use the Panties of Light to save them (that’s the aforementioned poke-and-rub minigame).

All of this is played for laughs. Moero Crystal H is outrageous, and it is outrageously funny, if you are the kind of person that can find fan service to be amusing. The poses and costumes of the characters are far too over-the-top and explicitly focused on anatomy to work as pin-up. The raunch is too extreme for it to be titillating or sexy. If you’re not laughing along with this game, then it’s simply not for you. One advantage that it does have over its predecessor, though, is the quality of the localisation. The previous Moero Chronicles fell flat at times because the localisation was cheap enough that the jokes were clumsy or incomprehensible. Moero Crystal H, meanwhile, has been translated into a more naturalistic level of English and, whether you laugh at it or not, it does get its jokes across exactly as intended. 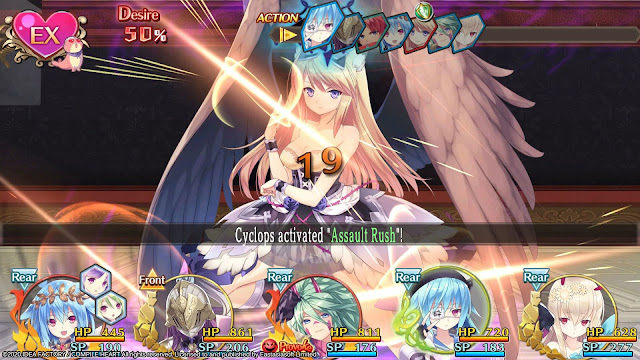 Outside of the humour, Moero Crystal H isn’t trying to do much. Characters are anime tropes, through and through. They’re nice, safe and familiar for the audience that would be drawn to this game. The vast majority of the characters don’t have character arcs that are integral to the narrative at all (because in most cases the developers aren’t able to assume that a particular character has joined the party), but those that do aren’t exactly musings on Foucault, Nietzsche, Derrida or Sartre, either. In fact, there’s a clear contrast between Moero Crystal H and something like Mary Skelter. Both are dungeon crawlers from the same company. Both have heavy fan service elements. However, Mary Skelter is also interesting in being an exploration of the aesthetic of fetish, and the fairy tale connections give it a literary context. Moero Crystal H is one giant sex joke, and that means that its appeal is more narrow and limited. It’s not worse, by any means. Just like American Pie or any of the other sex comedies that were big in the 90s and 00s, Moero Crystal H isn’t meant to be something you muse over. It’s simply meant to be enjoyed in the moment and then moved on from.

The character designs are excellent, though, and this was naturally critical for a game that is all about those characters. It’s not easy coming up with 86 different characters that are each highly fanservicey in their own way, let alone throw in the huge number of amusing enemy designs (including that aforementioned condom golem). A big part of the appeal of Moero Crystal is meeting each new girl and then finding out just how daring the alternate costumes can be, and I guarantee you that they’ll meet and exceed your expectations. The smattering of key CG art throughout is also drawn to an exceptional level, and are a good reminder that Compile Factory have a mastery over this specific kind of art that is rivalled by no one.

There are a lot of people that will be excluded from really enjoying Moero Crystal H. People who typically tolerate fan service because they like the rest of the game on offer will likely find the way that this one makes fan service the core of everything to be unpalatable. People who like to see the fan service in service of something broader within the narrative will find that the fan service here, which exists purely to be fan service, is a little shallow and – dare I say – exploitative. Obviously, those that can’t stomach fan service at all will find this thing well beyond their limits. However, Moero Crystal H does what it sets out to so well – be an outrageously perverse work of extended sex humour – that if you can enjoy that, on those terms, you’re not going to find something more amusing on a console, likely ever. There’s something almost noble about that purity of vision.