Take your podcasts pro with this one.

Maono is very much a new kid on the block. This Chinese-based sound equipment manufacturer only began operations back in 2014, but if the Maonocaster E2 A is anything to go by, this company is going to turn some heads. With this incredibly affordable, robust, and versatile combination of production studio and microphone, until you’re ready to start a sound studio, this has all the toys you’ll need to do anything from podcasts and streams, through to a host a home radio channel, and record that demo CD.

The Maonocaster E2 A kit features two main components: the Maonocaster E2, which is an “all-in-one podcast production studio”, and the Maono PM320, the company’s entry-level microphone. I’ll start with the E2. I’ve never had a production studio to play around with. Previously all my podcasting, streaming and video voiceovers had been done by using a simple USB mic, and I can’t see myself going back now. This little unit – about the length of one Nintendo Switch and width of two, has all the features. There are a host of inputs, including an XLR port for the microphone, a connection point for instruments, and Bluetooth connectivity to connect your phone with it.

Once you’re all hooked up, there are all kinds of inputs that can help you run live shows, adjust the settings to suit your environment, and generally record some pristine audio. The 11 programmable buttons (eight that allow for up to 20 seconds of recording, and three that support up to a minute) allow you to get jingles and sound effects into your recordings on the fly. Meanwhile, a loop option allows you to keep the sound effect going. Need a quick bathroom break mid-stream? Put on some elevator music. Your audience won’t mind (surely). Meanwhile, the other buttons allow you to simulate various environments (so you can fake record in a valley by adding an echo, for example), as well as adjust the dry/wet sound produced, tune the decay, time and pitch, and switch on and off a noise-cancelling option. The latter does do a good job off cutting out ambient noise like rain and passing cars if your recording space happens to be a room facing a street. 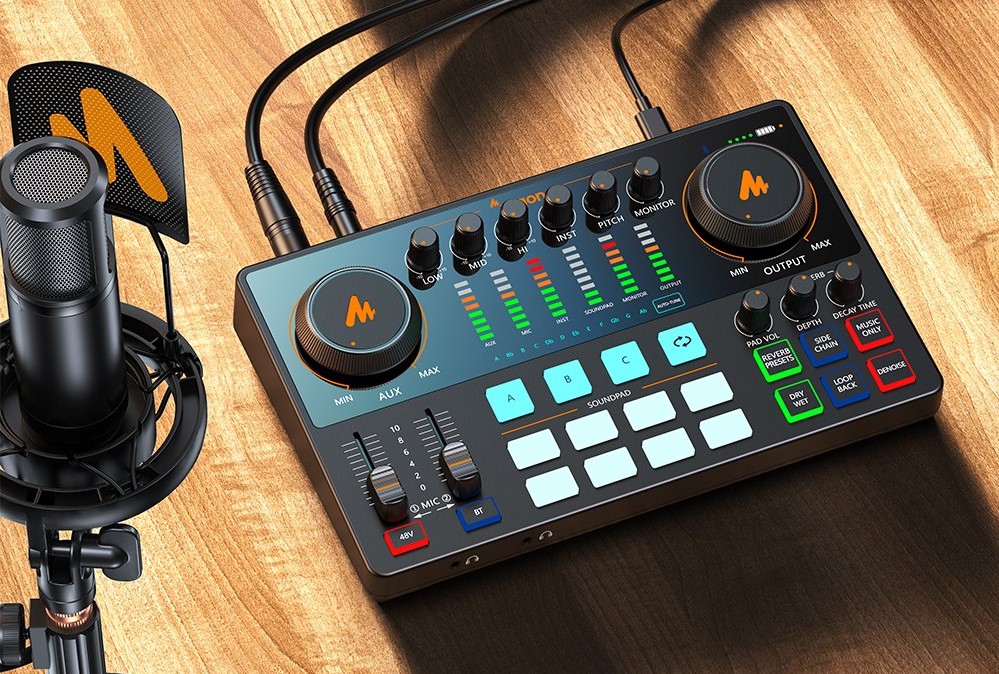 Other sliders can further tweak the noise that is allowed into microphone versus volume and depth. In short, there’s a lot to work with here, especially if you’re newer to this than I am, but thanks to some solid instructions, plenty of guides online, and a fun easiness of use, the Maonocaster E2 is something that you’ll enjoy tweaking around with until you’ve found a sound you like. I’m entirely certain that there are production studios on the market that are more robust and featured than this one, but this is so light, portable, and easy to use that you’d have to be deep down the rabbit hole to need to upgrade beyond it. The only two things I don’t like about it is, firstly, the way that the USB connection to the E2 doesn’t charge it – you need to use another USB connection to charge the device, and there’s no wired power option. The battery is decent enough, but for travel or extended sessions, you may want a power bank or two as a backup.

Secondly, the feel of the unit itself is fragile. It’s light and easy to carry, but the plastic casing feels thin, and the various dials and knobs almost look desperate to snap off. Consequently, though portability was a goal with the E2, it is also the kind of device that I don’t want to put in a backpack for fear of dropping it somewhere. At least, not without a backup at home. Since I don’t have a second unit, the E2 has been firmly on my desk since the day it arrived.

The PM320, meanwhile, has better performance than I would have expected for a sub-$100 microphone. At the bottom of this review I’ve posted various videos so you can compare sound quality, but by hooking this up to the E2, and playing around with the settings a little, I think you can produce a far better sound quality than can be achieved with a good USB microphone. Unfortunately, you also can’t connect a USB microphone to the E2 to take advantage of the settings, it is a strictly XLR port connection device, so if you’ve only used USB microphones previously, you’re stuck with the PM320. 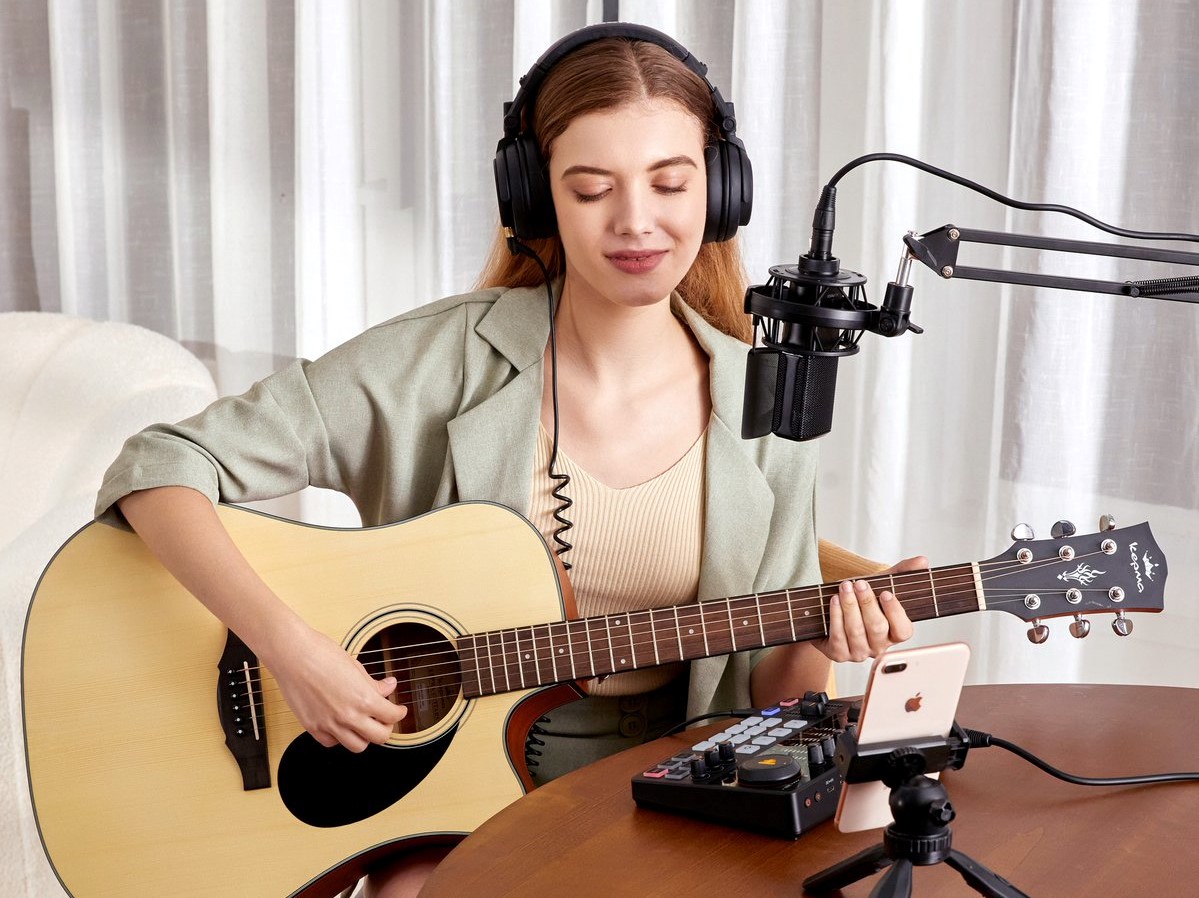 Given that I’m pretty sure I’ll never go back to USB microphones, I decided I did want to see if I could do better for myself than the PM320, so I went and purchased an RØDE PodMic (with added benefit that by doing so I’m supporting one of the few Australian tech equipment companies left). It connected to the E2 perfectly fine, but also needed boosting from the “40dB Condenser” power setting that the PM320 operates best on, to the “50dB Dynamic” power setting. Otherwise the PodMic was simply unable to record at a volume louder than the softest of whispers. This boost in power came with an increase of ambient noise being let in, and further tweaking of the dials and settings to try and mitigate against that, but the end result was good, I think. You can check that out at the bottom of the review here.

To me – a genuine enthusiast for video recording and broadcasting but also well away from being a professional – this was the ideal compromise. I can now use my RØDE with a perfectly adequate production studio, that affords me plenty of settings that I’ve barely even started to explore yet. At the same time I’ve also not had to go and invest in an $800 RØDEcaster console which I would have no idea how to take advantage of anyway. That was always the thing that had put me off getting into this kind of equipment in the first place.

It’s also worth noting that there’s a lot to the E2 that I’m not planning on using (or will likely ever use). That Bluetooth connection that allows you to hook the E2 up to the phone is a great solution if, for example, you’re a broadcaster taking calls in off Skype or Discord. I’m not going to do that. It is possible to connect two mics to the device to allow for live podcasting at events, or guest interviews. I’m also not going to do that. I’m not even likely to use the E2 for recording music (though this actually is something I could take advantage of and who knows, perhaps one day for sheer kicks I will record my most excellent solo of the Final Fantasy 1 soundtrack). The point of the E2 is broader than just “video game streams and podcasts”, and so it will have a larger potential audience in kind, though if you are only a very casual streamer or YouTuber, the different connection point and feature array might seem a bit much. 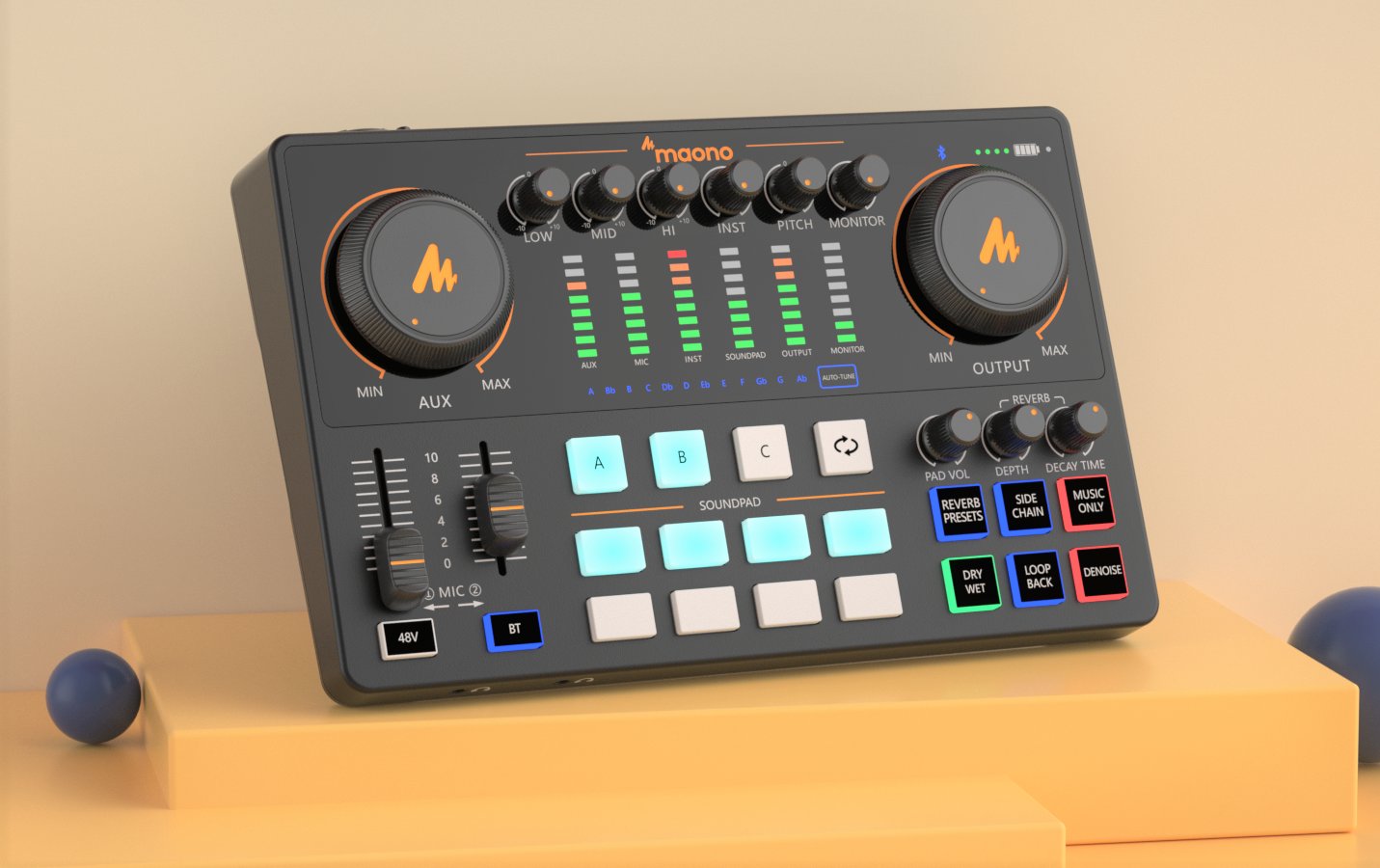 What I really like about the Maonocaster E2 A is that, while it may be an entry-level sound card and mic, it’s an entry-level product in higher end of sound capture and production. You definitely get more features and functions than you’ll ever get from a USB mic, and the E2 unit supports some very high-end sound equipment. Will you be able to set up a professional studio with this? No, of course not. But for around $200, Maono is on to a winner with this. I’m going to be using this for years. Even if I end up getting a higher-end console, there’s still the benefit of portability for trips overseas and the like. Thanks to the Maonocaster E2 A, I am an instant fan of this company.

The excellent Brigandine: The Legend of Runersia is out now on PC

Like Japanese pop music? There’s an online concert coming up for you