A roguebook is when you need to keep starting the book again because you don't have a bookmark.

Trust Richard Garfield to reinvigorate my interest in deckbuilding roguelikes. I thought I was done with them. 2017’s Slay the Spire is excellent, but didn’t need to spawn an entire genre over the course of just five years, and we’ve already reached the point where the likes of Monster Train, being both perfectly competent and yet utterly boring, highlights perfectly that we’ve hit the point of saturation and there are just too many of the things now. I’m going to review a really bad example of the genre soon enough, too (stay tuned for that). It’s a genre that needs a break, and while Garfield’s Roguebook is yet another one… despite myself, this one really hooked me in.

It’s the balance that does it. If “Richard Garfield” isn’t a recognisable name to you, perhaps if you saw “the creator of Magic: The Gathering,” you would be better clued into the value he brings to the project. This game had the input of the man who was, in a very real sense, responsible for the invention of the collectible card game, which in turn directly led to the deckbuilder. Garfield clearly loves the idea of blending player agency and randomness in card games, allowing them to build decks to suit their personal play style, and then encouraging them to spend hours trying to tweak those decks for the best results. Roguebook is that philosophy in motion. There are four different heroes to play as, and you can take two on any given adventure (or “run”). Each hero is generally tuned towards one type of play (aggressive, support or defensive), but within that, there are many different specialisations that you can shape the characters towards, based on the cards that you add to their respective decks as you play.

You get a lot of opportunities to acquire new cards as the party goes about its quest, as well as a large number of boosting artifacts and other items that can customise your characters further. Choosing the right cards isn’t necessarily a matter of picking the ones that give the biggest numbers. Rather, success relies on looking for synergies between cards and artifacts that allow for your team of two to fight together more collaboratively. As with any roguelike, the difficulty scales rapidly, so you’re going to need to really master these strategic synergies to reach the endgame. 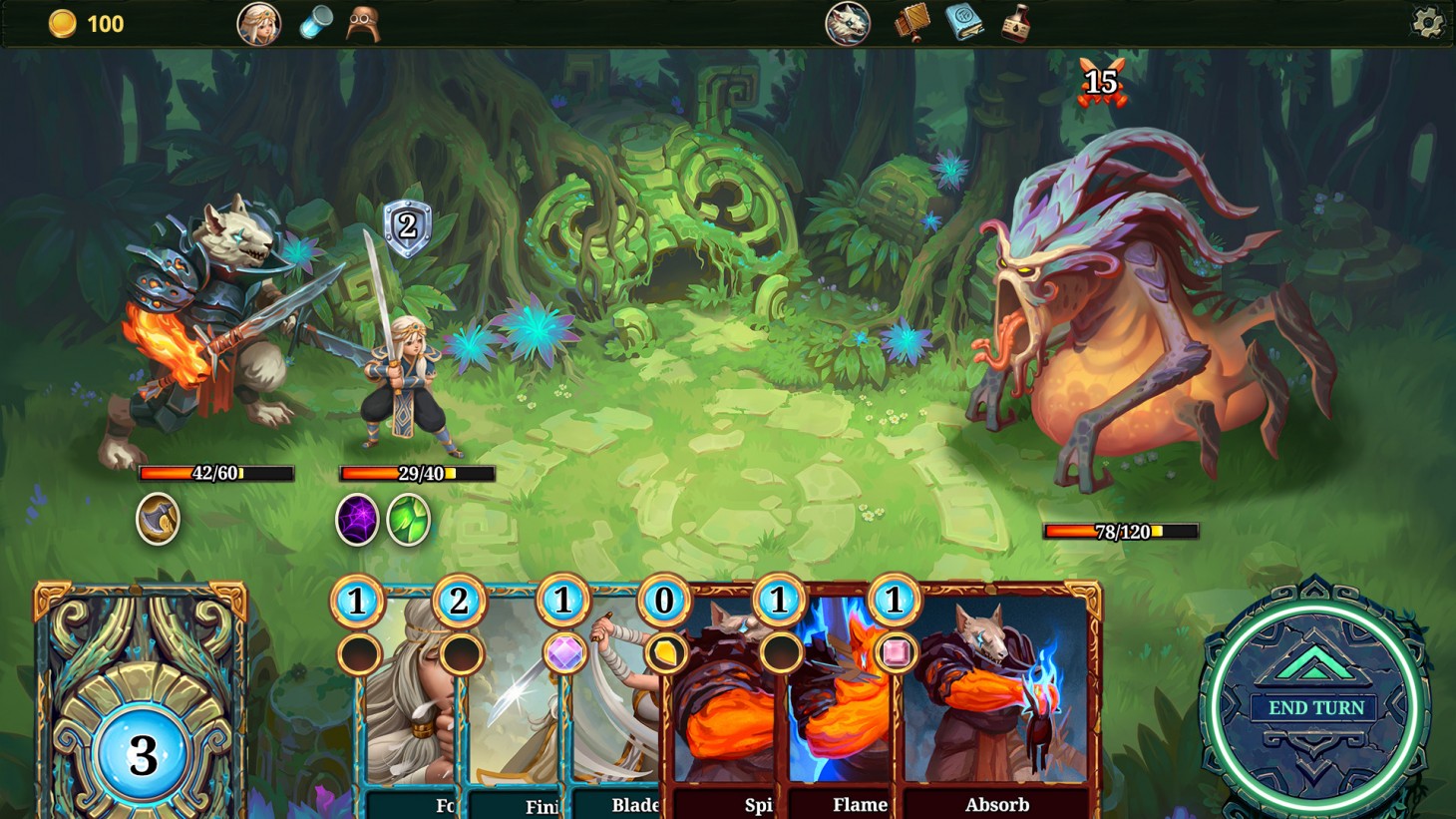 If all of this sounds a little esoteric and abstract, that’s because it is to casual observation. Cards are abstractions of defensive moves, attacks, and special powers, and there’s an exploration system on top of that, where you’ll need to reveal chunks of the map that contain enemy encounters, treasure, and events, and to do that you’ll be using a magic paintbrush and bottles of “ink” to do open up those maps, one square at a time. Finally, there’s a lot of jargon to wrap your head around, particularly regarding combat effects that are core to your team’s effectiveness in battle. Thankfully this is a game that you can learn on the fly. There’s a very short tutorial to make sure you can play the game at a basic level, but then you’ll learn by making mistakes, and likely failing on a run, only to dust yourself off and give it another go. That is how a roguelike works, after all, and this one is particularly good at easing you into it quickly.

There are also skill trees as well as individual character levelling (which unlocks more cards that they can use). This acts as the permanent progression that carries over from one run to the next attempt, and makes each subsequent run easier. All brought together, there are a lot of systems at play in Roguebook, and it is to the developer’s great credit that it’s all balanced so nicely. It’s difficult and you will lose (and often), but that’s the point of a roguelike, and you will always go into a run fully expecting to do just that little bit better this time around, as a combination of experience, practice and familiarity with the cards is enhanced by those permanent upgrades to smooth the road.

It’s the variety that makes it so playable. Enemies all have their own quirks, attack patterns, and strategic challenges, and that’s not just the bosses. I quickly discovered that my personal moral foe was the sheep-hurling catapult, which got more and more powerful with every turn, and forced me to be more aggressive than my preferred defensive approach usually allowed. This is just a common, run-of-the-mill enemy encounter, but I always found myself sweating over it when I started exploring the area where it turns up on a run. 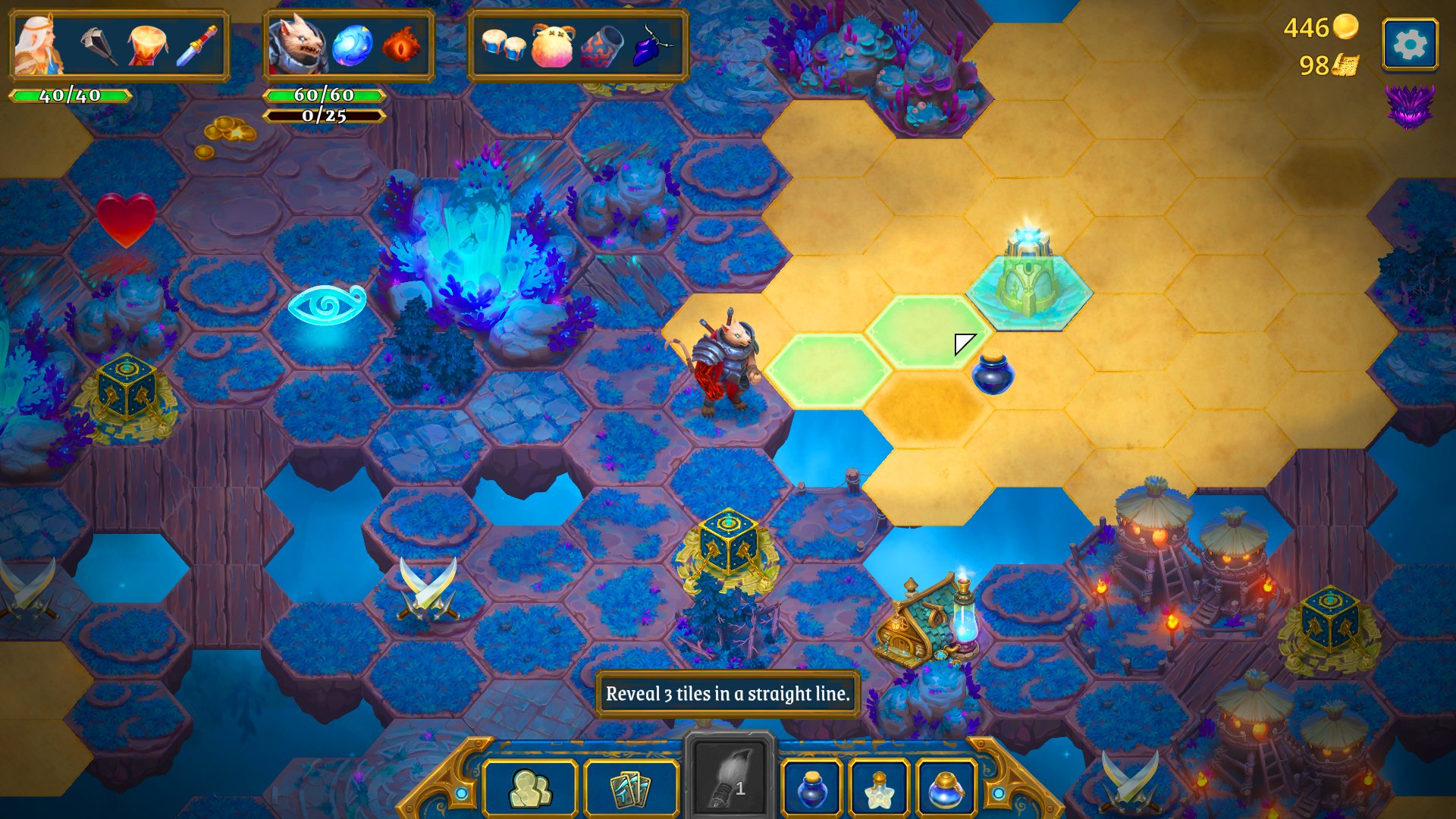 Capping off the production values is the art style, which is rich and vibrant in its dark fairy-tale way. The range of enemies and environments is great, and the randomisation of the map does make exploration a particular delight every time. You’re never going to be able to clear out the whole map with the amount of exploration ink that you’re given, so it will always be a fun surprise to see just what loot you are going to accumulate this time around. The only downside is that on the Nintendo Switch, the loading times for battles are fairly lengthy, and that disrupts the smooth and snappy flow and transition between exploration and combat that I suspect the game enjoys on other platforms. On the other hand, the deckbuilding roguelike is perfect for short bursts of pick-up-and-play fun, which is the strength of the Switch.

Whatever platform you play Roguebook on, its sheer quality helps elevate it to the top of a genre that has become far too overused over the past five years. The precision balancing and depth of the gameplay, the entertaining design and varied exploration elements combine to overcome the fact that you’ve probably played what Roguebook is offering a few times over by now.

If you thought a month was going to go by…