I really worry about the backs of these poor girls...

I’m going to simply copy in a big chunk of my original review of Neptunia X Senran Kagura: Ninja Wars on PlayStation 4 for this review of the new Nintendo Switch edition. I almost wasn’t going to play this version at all, as the updates that were being trumpeted in the PR were relatively minor, and while I like this game a lot, I find myself with less and less time to play even the best games that I like.

However, I did think that this would be a more natural fit for the handheld console, as it has all of those qualities about it: it’s a relatively streamlined, fairly short action-brawler, with a simple (but vibrant) visual style that wouldn’t have lost much on the smaller screen. So I gave it another spin, and as it turns out, I was right. There’s a slight drop in graphical fidelity from the PS4 version to get this working on Switch, but the mission structure, combat system and overall vibe of the thing do suit the Switch better. You won’t necessarily be playing this on the train (unless you’re like me and use fanservicey games to make sure no one sits around me – it’s the best anti-COVID social distancing tool of all), but it is such a “Switch brawler” experience that I’m now surprised the console wasn’t the first platform for the game.

For the new features, it really is a thin list: There are two new characters, Yuuki and Goh, a new difficulty setting option, as well as some new DLC costumes. I suspect the latter will be the most appealing thing about the Switch edition, given the fanservice orientation of the game, and the good news is that those costumes do look good. That being said some additional missions or minigames might have helped. I’m not usually one to complain about content, but my one main criticism of Neptunia X Senran Kagura is that it came across as a game that was meant to be much larger in scope than development time and budget allowed. Nonetheless, you’ll have fun with it from the moment it opens to the moment it closes. 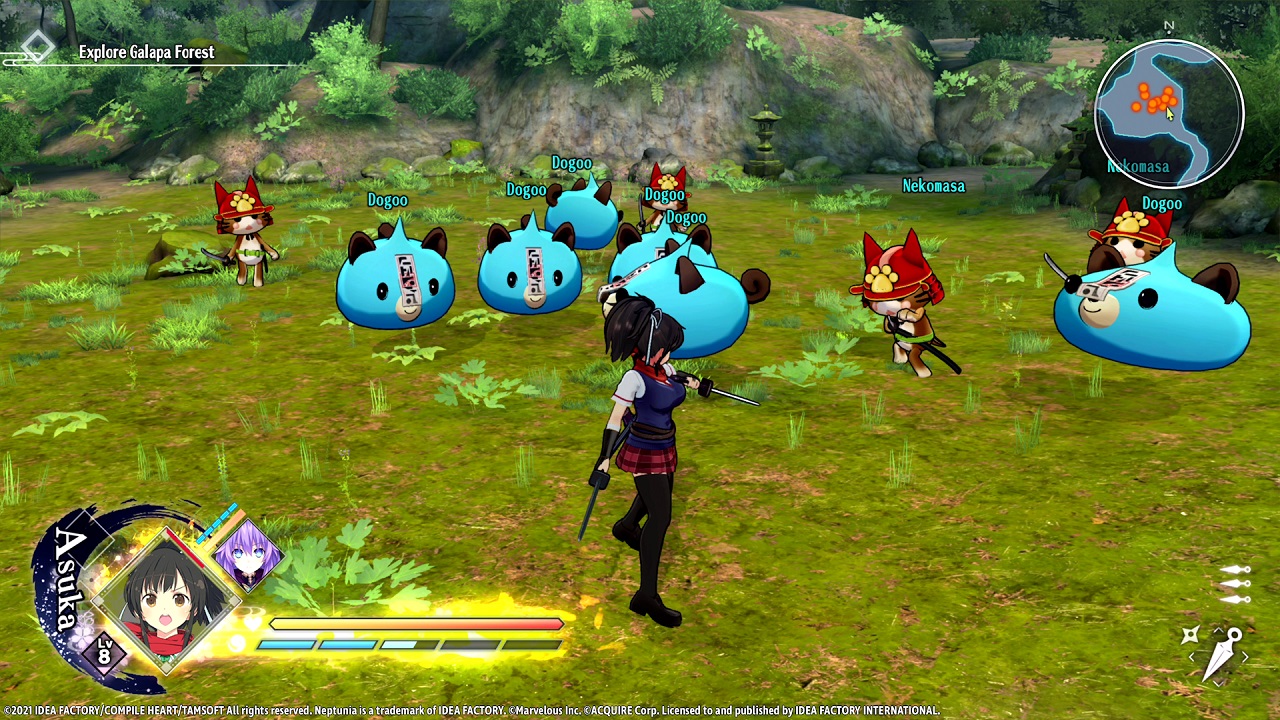 As I wrote in my original review: It’s not perfect by any means, and it’s not the best Neptunia game. Nor is it the best Senran Kagura. It’s certainly not the best game I’ve played this year, but it’s also a fun and frivolous little experience that knows its limits, doesn’t outstay its welcome, and is wildly entertaining while it lasts. Taken in that context, the little issues dissipate. What matters is that the development teams got the important bits right within their limited budgets, and made something really pretty into the bargain.

Once you get to dive into the action, it’s pretty good stuff. Tamsoft is experienced with both properties, and they do the crossover justice, with a fluid, dynamic action system that relies heavily on utilising a range of special abilities while trying to avoid being hit by the enemy too many times. The dodge button is incredibly useful, responsive, and a key element of the system, especially given that it confers temporary immunity. Enemies tend to do a lot of damage and soak up a bit in return, so weaving in, launching a special, and then ducking back out of the mess is a useful strategy overall.

The roster of characters all feel equally useful and differentiated, too. There’s not so much of a difference from one to another that it can artificially scale the difficulty of enemies depending on which character you’ve chosen for which battle, but there’s just enough separating them so that it feels like there’s a point to choosing your favourite two characters. Enemies, meanwhile, tend to be quite simple and only attack in small packs, and there’s not enough variety between them, but they work well enough as a brawler-style gauntlet to battle through before squaring off against the bosses (which can be challenging). 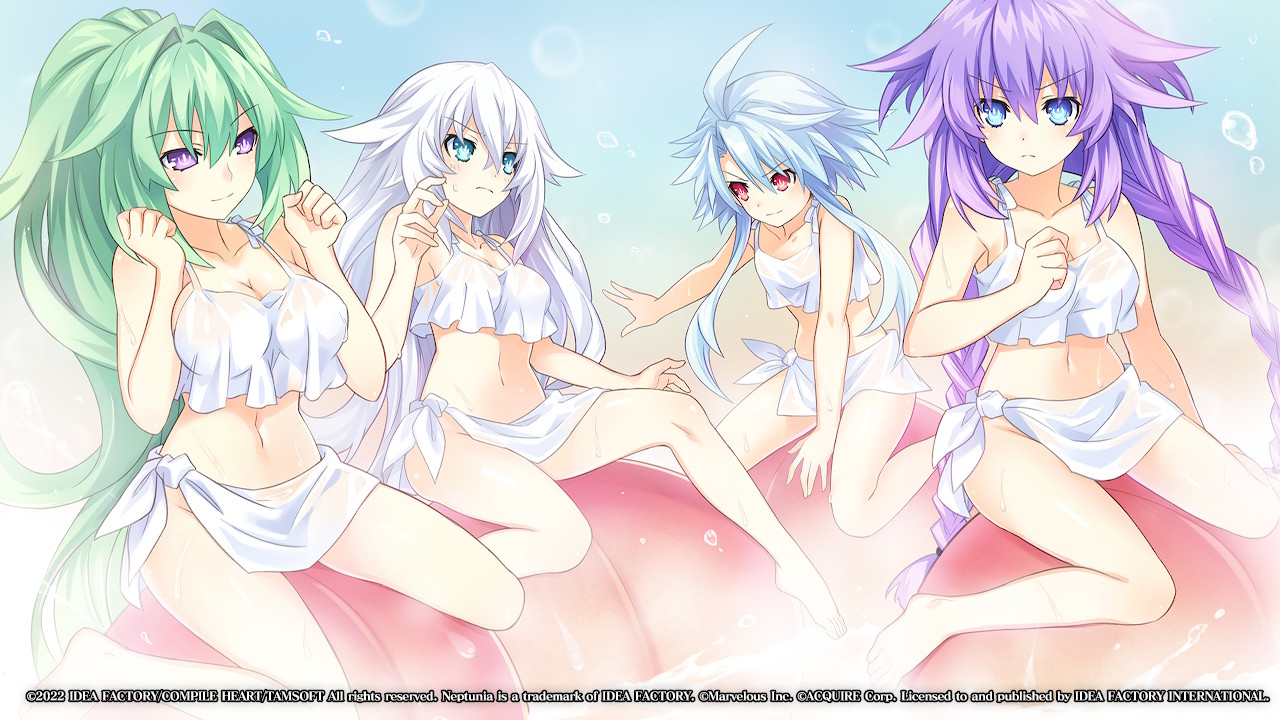 I did have a few small issues with the combat system. Firstly, the camera isn’t nearly as responsive as it needs to be given that you’ll frequently be surrounded by enemies, and more than a few times I made use of that dodge button, which, thanks to the dash action that accompanied it, meant that the camera would swing around to nothing in particular and I lost sight of the enemies that I was trying to track. It’s never resulted in game over screens for me, but it was a quality of life issue. I also had an issue with the lack of attack pattern information that would sometimes make things artificially challenging. A good action combat system – a Dark Souls system, for example – can be brutally hard, but it will always give you some kind of tell or projection that would make getting out of the way possible for skilled players. Either I just wasn’t picking up on the tells with a few of the enemies in Ninja Wars, or they weren’t there. Not that Ninja Wars is trying to be particularly difficult, but giving players the ability to win on skill is a basic good design principle in 2021.

Additionally, and this is really minor, but the balance is all out. Once I was in a dungeon I wanted to spend some time in there, fighting my way through hordes and dealing with some kind of attrition before tackling the boss. The levels in Ninja Wars are pretty, colourful, and enjoyably designed as far as brawlers go, but they’re also over far too quickly, especially given that they’re bookended by such lengthy cut scenes. It’s a brawler, Idea Factory. Let me brawl. And while I’m griping about really minor things – where is the photo mode, Tamsoft? You used to have them in your Neptunia games on Vita. You can clearly do them, and I’m sure a Nintendo Switch can handle the same photo mode engine. Every game with a fan service element needs a photo mode. How else can I amuse myself by blasting my people’s eyes on Twitter with it?

Working with a clearly limited budget, Tamsoft has focused on delivering a tight action-combat system, while also relying on the fan service of both Senran Kagura and Hyperdimension Neptunia to see it through. It’s a good couple of hours of genuine fun, with the requisite bath scenes, humour and familiar characters to meet and fight. You can’t help but think that both properties could have grown to become more than this, but taking as it is, it’s still entertaining nonsense, with a heavy emphasis on the “entertaining”. I play enough serious games that require deep analysis, this kind of thing is my ideal break time between them.

And today’s eShop nasty is… Beach Girls: Don’t Lie In…

On frame rates in games… it just doesn’t always matter