There's something special about this purr-ticular café!

What can I say about cats that hasn’t been said before? Cats are great. They do silly things, like chasing small plastic springs. They do cute things, like lick your nose to say hello. They do impressive yet annoying things, like beg for food (but at exactly the right time). Cat cafés were an emerging trend before the pandemic, and while the idea has stalled in my neck of the woods there are loads of successful ones out there. When I first heard about cat cafés, it seemed like a great way to help a lot of cats at once… but actually managing one also seemed like an awful lot of work that I’m just not capable of doing. Well, the time has come: video games have caught up to my life’s desires, and Cat Café Manager has been developed. Finally, my dream job from the comfort of my own home!

In Cat Café Manager, you’ve travelled from the big city to a small country town called Caterwaul. It’s a familiar place, somewhere you spent time when you were young. Your Nan has unfortunately passed on, and it’s up to you to rebuild her cat café (I named mine Purr Me Another). There are some characters key to the story, which is about a big corporation looking to claim the town as its own, but mostly it’s just happily building and running the café. You can go as fast or as slow as you want; I chose to start quite small and grow rather slowly, but I’m quite proud of where I’ve ended up in the hours (and hours… and hours…) I spent playing. Actually, my relationships with the townsfolk grew faster than my actual café!

There are a handful of key characters in the game; these characters progress the story. One of them can be invited to the café once per day. This makes a lot of sense, because if you could just call them all the time, all at once, the story would be over in the blink of an eye. Each one fits a type of customer: there’s a witch, a fisherman, and a business go-getter, for example. Each customer type brings in a different form of currency, and every form of currency is used for something different. You can choose who to advertise to, which will limit customers to those specific types. This is a delicate balancing act based on what you want to focus on. I tried to start with everyone, but I felt like I wasn’t moving forward. So I first chose to only focus on witches, who pay in nectar that can buy ingredients and recipes. This meant I could rapidly expand my menu to keep all my customers happy, even as they request more fancy items. Then I focused on the punks, who can pay in bricks that are used to expand the cafés footprint. And of course, I couldn’t have an empty café, so my focus then went to vagabonds who pay in fabric to buy chairs and tables. This is entirely my play style, and anyone who picks up the game will be able to chose how they progress too. It’s hard to balance things, though, especially always needing witches to pay for ingredients. 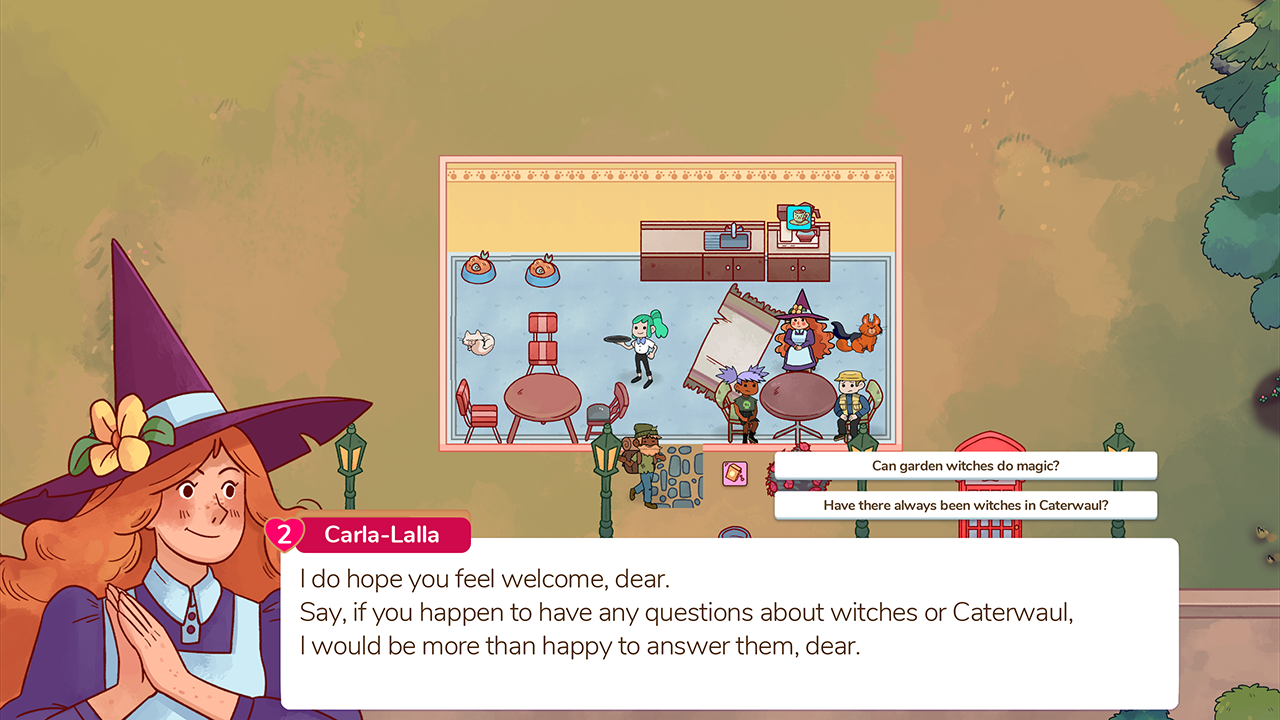 I think I’ve been spoiled by games like Diner Dash (I know, I know…) because I expected I’d be able to click and just automatically move to the place I wanted to go. But no, I had to WASD my way to each customer, then click and hold to do the task, then WASD to my next location. It took a bit of getting used to but I chalk that up to being much more comfortable with a controller than a keyboard, not something wrong with the game. That being said, I would love to play on iPad and the click-and-go thing would be best there. I’m talking pure fantasy though, not any sort of port in development.

Staff can be hired to help run the café. First, it’s just you, but slowly the number of people working there will grow. Staff can do various activities, such as taking orders, making orders, serving orders, and cleaning. One thing that’s up to you, though, is talking to the chatty customers (often the witches and the fisherfolk). Staff work on their own, without needing direction; this makes things significantly easier one the café gets larger. One person can only do so much – trust me, I tried! I’d make a terrible manager, as this game as taught me that I would micromanage staff probably until they just give up and quit. So I learned my lesson there! I did have a bit of an issue, though, as they’d something just freeze and not help anyone for a bit. It wasn’t a huge deal, as it didn’t effect a whole lot, just a bit annoying when things got busy. Staff can be levelled up and obtain new skills. The skill levels effect how quickly they can do their job, especially as things get harder and take longer.

So that’s the people, but what about the most important creatures – cats! What’s a cat café without cats? Now, a cat café isn’t just an economic way to hoard cats, it’s more like an economic way to foster cats and find them new homes. Cat Café Manager is no different. You start off adopting one cat, then start luring others in with good food and affection. You can adopt the cats out which is both heartwarming and heartbreaking, even in digital form. I’ve done it in real life, so I think that’s where some of that emotion comes from. (Fun and vaguely relevant story, she didn’t get on well at her new home and now she’s been with us for seven years. And this one big reason why I couldn’t run a real cat café!) The cats, like the staff, can be levelled up to make different sorts of customers happy. They’ll also gain what I describe as buffs, which are really just traits. Some useful traits include gourmand (you’ll use less ingredients) and social butterfly (they’ll make others comfortable). The cats’ levels are directly proportionate to how happy the customers are, so levelling up as soon as possible and as evenly as possible is pretty important. The higher levels never felt off-balance or out of reach, which is great. Cats do cat things and need cat things, so they’ll need toys, clean litter, and regular feedings. In return, they’ll make customers super happy. 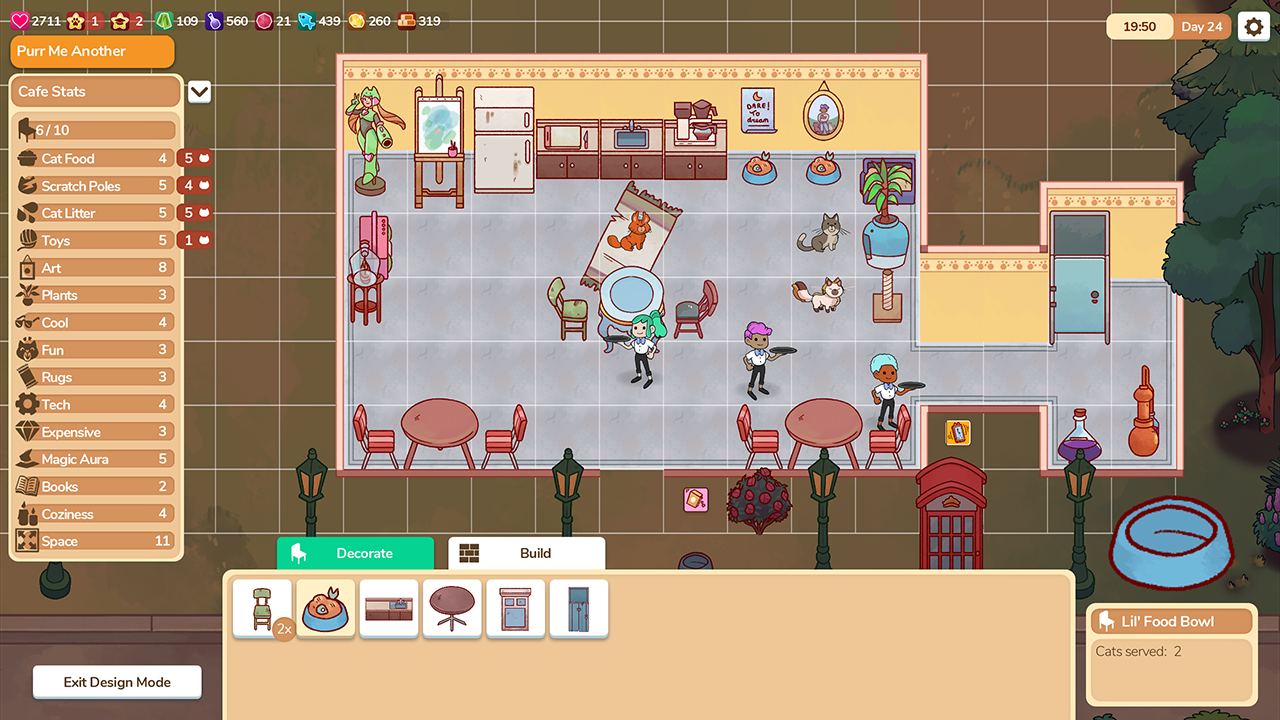 So I expected building my very own cat café to be the most exciting part of the game, but because of how scarce resources for decorations were the way I chose to play, it took a bit of a back burner to the day-to-day operations. The way you build is easy, you place floor tiles (that cost bricks) and walls go up automatically. There is an issue with this, though, because it’s impossible to move/change doors and windows because you can only see the back walls! I have to move all my furniture up, remove the entire first row of floor tiles (at least they’re refunded so it doesn’t cost me), place them back down again, then add the doors and windows. It’s extremely tedious, and despite being such a small part of the game it’s sticking with me as being a problem. Anyway, the floor goes down, furniture goes in (and out, depending), and everything not used is stored. I do with I could delete items I’ll never use. Maybe this is also why building wasn’t super exciting to me – it’s a bit tedious and a bit confusing. Maybe I’m missing something, I don’t know.

The game builds up smoothly in large part to the skill trees found at the cat shrine in the woods. Each tree is for something different, for example food/drink, decor, and cats are all categories. You chose what you want to work on, then collect enough happiness hearts from customers to meet the goal and it unlocks. From there, you can choose another. Lower-end upgrades cost less and take less time to complete, while the later ones can be time-consuming. I appreciated this way of holding my hand while giving me free reins. I didn’t have access to everything at once, but I could choose what I wanted to focus on. In the end, I jumped around a lot, trying to keep things mostly even amongst the trees.

Normally when I review a game, I play, I write, and I’m done. Cat Café Manager is different: I fully intend to continue playing it for many more hours. A terrible saying is that variety is the spice of life, and this game provides a lot of variety via the choices players can make with regards to progression. The cats are great, of course, but the real fun here is running the café and learning the town’s story. Aside from some fairly minor issues, such as my qualms with building, I always came away from Cat Café Manager with a smile on my face.

Idol Manager sounds like a pervy fan service-focused thing, but…