This isn't the Conan we were looking for.

Conan Chop Chop wants to sit somewhere between Gauntlet and Hades. It wants to be an action roguelike with a moreish loot system, but also being orientated heavily towards bringing four friends together for some button-mashing chaos. Unfortunately, it’s much too inconsistent to reach the heights of either genre-defining great, but it is good fun. Really, the only outright problem it has is its treatment of the license.

Robert E. Howard’s Conan and the Hyborean world he is central to is… not a light and fluffy, comic thing. It was always presented as a grim, harsh and serious (in a pulp fiction manner) world of unrestrained brutality and violence. Kids would watch it (when their parents weren’t looking), and later graduate to reading it (again, when the parents thought they were reading something a little more meaningful), and because of that there have been attempts to extend the property to younger generations, but Conan has always been awkward when it has not been in service of a dark, adult kind of fantasy. This is why Conan Chop Chop comes across as an awkward misuse of the property, too; the cute-and-bubbly aesthetic and Sunday morning cartoon theme just doesn’t gel well with these characters. To be clear: I’m not saying it’s unappealing. It looks good and is worth a chuckle. It’s just that there are plenty of licenses that would have suited this game better, and if this was an Order of the Stick brawler or themed after He-Man, She-Ra, the 80’s Dungeons & Dragons cartoon, or any number of other B-fantasy kids things, it would have been perfect. As it is, though, I do think that a licensed title should meaningfully reflect the license, and I just don’t see Conan in this at all.

As a single-player game, it’s an exercise in frustration. Because everything from the loot and progression systems to the enemy health is tuned around multiplayer, when you’re delving solo in “Conan” Chop Chop, you’re going to be inching forward, trying to whittle down enemy health bit by painstaking bit, and hoping that the loot system is not going to favour any of the three other characters that you don’t have along with you. When there’s only one human player on the screen, the energy is also very flat. Nothing moves with the fluidity or dance-like grade of Hades, (in fact, it’s quite pondering), and while the combat system has all the expected special attacks, parries, and weapon upgrades that you expect of a modern example of the genre, it’s easy to see that something is missing from the action. I would go as far as to say that the developers have done themselves no favours by including a single-player option at all. It would have been better to lock the game for two to four players, because the solo experience is so inferior and unbalanced that it feels vaguely misleading that it’s listed as a game for one to four players. 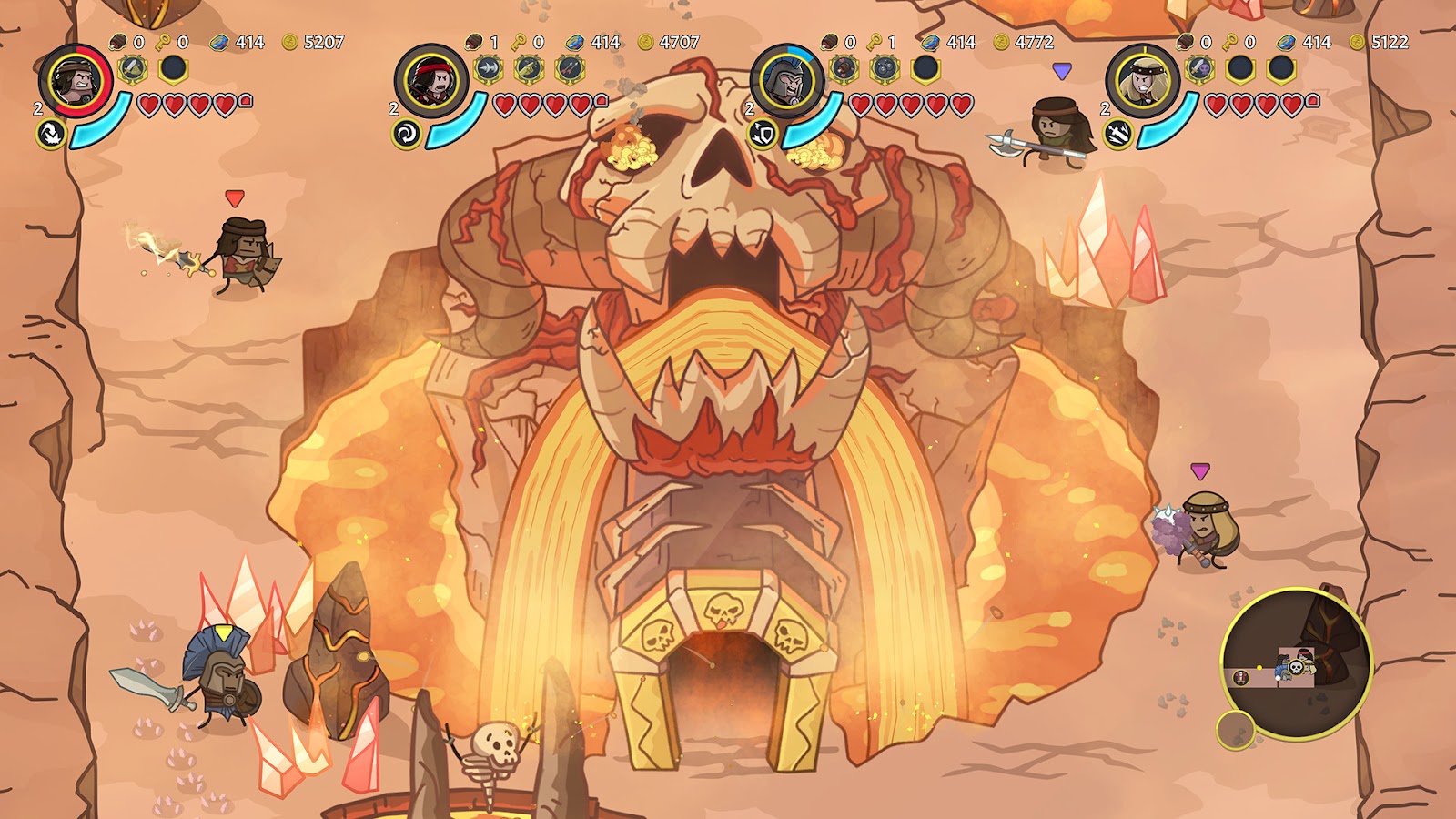 Multiplayer, however, is a very different experience. It’s mindlessly cathartic, genuinely funny, and clearly designed by people who understand multiplayer dynamics and play styles. I was particularly impressed with the way the developer could fill the screen with fireworks (and sometimes giant monsters, especially come boss time), while also making sure that each player was able to track what was happening with their own character. That’s not easy development work, and the team deserves kudos for the real skill that went into that. While the game remains difficult in multiplayer, it stops being “throw the controller in anger” difficulty and instead allows that everyone will feel like they’re being tested, but also participating, contributing, and being rewarded,, regardless of their skill level. In this way, if young ones end up playing with their older sibling or parent, “Conan” Chop Chop can be a fun family activity. Each of the four characters has substantial different roles, and there is a mix of melee and ranged roles, so no one is going to feel like another player is stealing their thunder by doing what they’re meant to do, only better.

This is where the Gauntlet comparison comes in, particularly older titles like Gauntlet Legends. That series was more about swarms than damage soaks like this one, but the delineation between roles is familiar, as is the way progression is handled. Total party wipe-outs will be common enough (and that means all equipment is lost), but experience carries over, so you can see the grind bettering the group with each run. There are only four different levels and bosses, and those areas are not that long, so it’s just as well that the difficulty is generally high and the grind is steady for the sake of longevity. Not everyone is a fan of the way roguelikes do this, but I do think that in multiplayer the draining nature of restarts is mitigated by the fact you’re having fun with buddies.

That Conan Chop Chop is supposedly a Conan title is a reminder that Conan is the only rival to Dungeons & Dragons as the most poorly used license in video games. It’s time to give someone else a go, Funcom. It also fails completely as a single-player adventure, so if you were considering it for yourself, look to any of the other roguelikes out there instead. However, I still think there is a role here that the developers have delivered on. There aren’t many multiplayer-orientated roguelikes, and you can certainly have a lot of fun with this over a weekend of beers and button-mashing. It’s not going to last long beyond the hangover and will be rotated out of the library quickly enough, but it’s still a moreish good time while it lasts.

Our new VN, A Week On The Water, has a demo and it’s live now!