With its title, Triangle Strategy takes being “on the nose” to a whole other level. While that is a weakness because it is difficult not to roll the eyes at it on first impressions alone, the ideas and concept behind it are sound and make more sense the further you delve into its mammoth narrative. You’ve got to be in a specific mood to really get into what Triangle Strategy is offering, but the rich, evocative narrative and classically entertaining tactics action is elevated to a remarkable degree. Time will tell if this game is remembered as fondly as the mighty Final Fantasy Tactics itself, but it’s arguably the most distinctive and interesting example of the genre since that original masterpiece.

“Three” is a recurring motif in more than the title. The world is divided into three major kingdoms, every so often you’ll be able to make a moral or strategic decision, and it will always be from three different options… and so on. Once you start playing you’re going to see three just about everywhere. Now, the development team at Artdink probably didn’t need to make the theme quite this obvious (or, as I said before, on the nose), but “three” is actually the ideal number for both strategic interest and moral or ethical thought experiments.

Two – a binary – is a little too simple. The moment you reduce things to a binary military strategy becomes a matter of whichever side has the bigger weapons is almost certainly going to win, and moral thought gets reduced to a matter of right or wrong. That’s not to say it can’t be interesting (think of the way the 300 Spartans strategised their way around a massive Persian army, or the trolley problem for an interesting thought experiment around a binary), but it is inherently limited. Meanwhile, more than three options can become overwhelming and over-complex to the point that the message is lost. Three, however, is a good number. When there are three sides in a conflict, the thinking around an issue still needs to extend past seeing things in binary terms, and when there are three sides in a conflict, you can’t attack one without presenting your back to another. 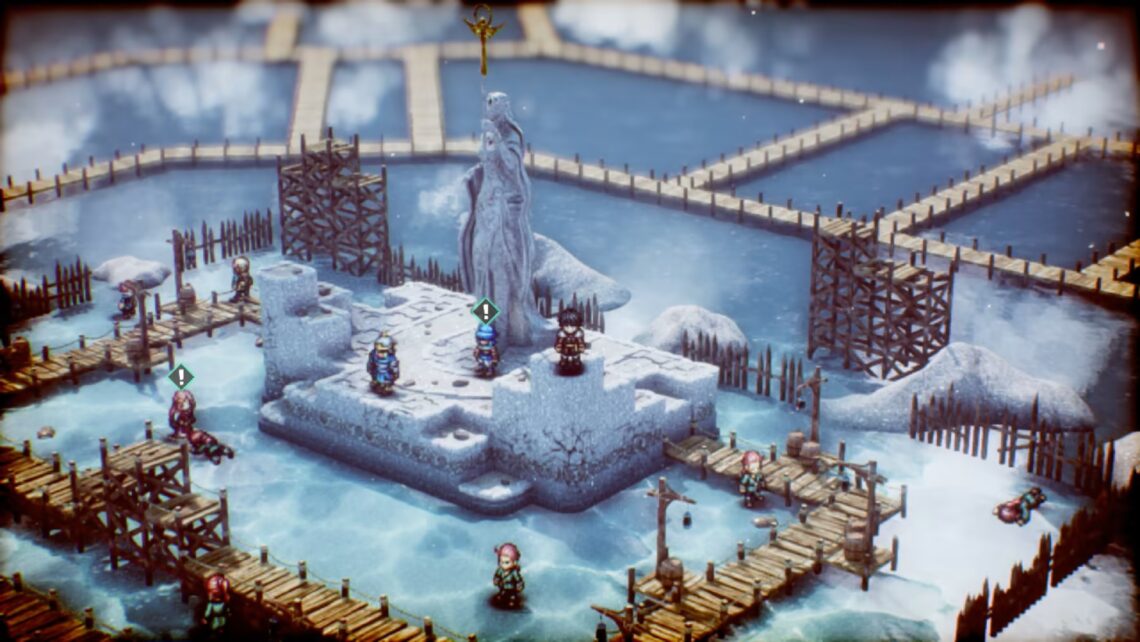 There’s even a real-history parallel to highlight just how interesting things can get when broken into three. Triangle Strategy almost certainly drew inspiration from Romance of the Three Kingdoms. The bulk of that book is focused on a time when there was an uneasy balance between three competitive states, and the politicking and scheming became very fluid as each jostled for position. Furthermore, despite the author’s absolute best effort to lionise one particular nation in the book, the fluidity and fact that all three sides had different ideological positions meant that there was also no one “good” side. Rather, readers were instead asked to consider a series of perspectives. That’s why Romance of the Three Kingdoms is such a classic. It’s 90 per cent battle scenes, yes (I may be slightly exaggerating there), but for the other ten per cent of the time, it’s providing its audience with real nuance.

Triangle Strategy is the kind of military-political drama that would impress George R. R. Martin (and one would hope to inspire him to finish writing those damn books). It is a game of pretty words and feigned tolerance masking clandestine plotting and veiled contempt. It tells a story of three nations with equal but different powers and resources, and you play as the poor sod thrust into the middle of it all. A young noble from a family with a fearsome reputation, you are tasked with navigating the labyrinth of this world’s politics and somehow avoiding getting everyone killed. No spoilers here, but the stakes do get very high indeed, and the weight of everything falls on this one near-rookie lordling. It’s not just the scale that’s massive, either. This is a game that touches on such a broad suite of themes – racism, nationalism, resource scarcity, class warfare and more – that there will be a dedicated fan base that will be pulling it apart for years. Because it has so many balls in the air, and is trying to juggle them with such nuance, Triangle Strategy is an incredibly long game at times, with what feels like hours between battle scenes. People who have played the Utawarerumono series will have a decent sense of its rhythms, but for those more used tactics games with brief introductions and epilogues to combat scenes, all of this can come across as a bit like Romance of the Three Kingdoms itself… remembering that it is a 2,000-page book.

It is wonderful, though. Earlier I mentioned that decisions come in lots of threes. What I think I loved about Triangle Strategy most of all are these moments. Most games that have a morality system that make it pretty clear which decision will result in what – think along the lines of Mass Effect and the way it spells out for you which route will make you a Paragon and which will make you a Renegade (or whatever they’ve actually called – I just remembered them as the red and blue decisions). With Triangle Strategy the responses are much more nuanced and much less clear-cut. As far as I can remember, whatever metrics you’re adjusting in the background don’t even have names. The plot unfolds based on these decisions, and can affect which characters you get along with and what help you can expect, but you can’t game this system, because it’s not always immediately apparent which decision will result in what needle moving. 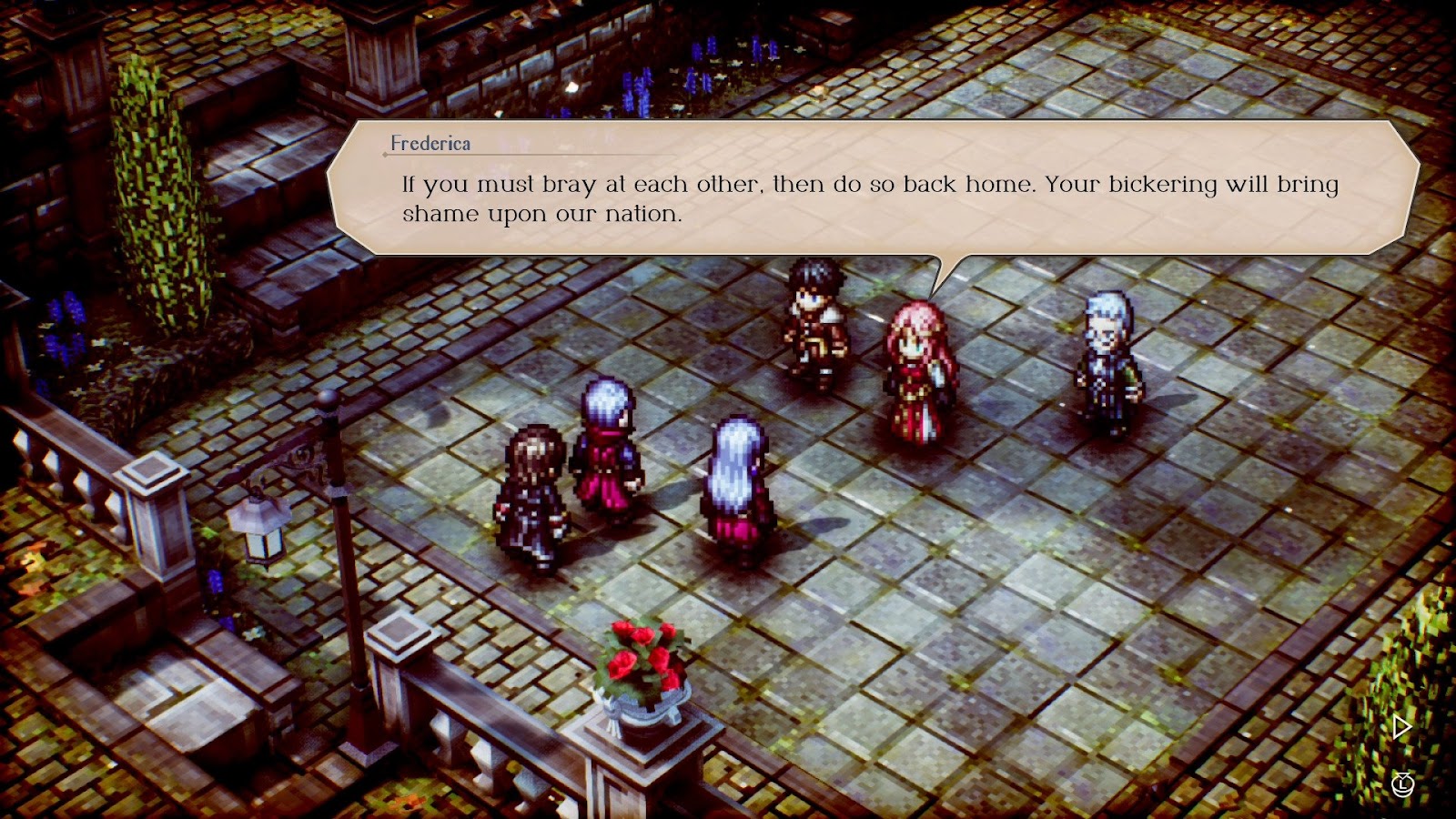 I know some people will probably have an issue with this being too opaque, but I love how Triangle Strategy simply asks me to choose the option of three paths that most closely matches my own personal view, without worrying myself about whether I’ll get the “right” outcome from the game. There’s always the ability to replay to find everything, but for the first run-through, you will let your own conscience guide you, and because the characters, settings and scenes are all written so beautifully, this is a story that you will be both invested in and want to take responsibility for.

None of this is to suggest that the tactical action isn’t great, though. Developer, Artdink, has done an excellent job in building a refined and efficient combat system that offers plenty of tactical variety. You’ve got the usual bevvy of class types, and the ability to specialise those classes as the game progresses (standard tactical stuff there). Like any good tactics JRPG, the goal isn’t so much to make each character a potent fighter as an individual, but rather, to make sure that whatever team you field has a series of skills that is complementary and effective in a group. It’s actually impressive how easily Triangle Strategy’s AI will down fighters that get separated from the pack, only to lose comprehensively to the same group if you work them as a unit better.

Further reinforcing this is the need to flank enemies. When you have an ally that is on the opposite side to an enemy fighter, each attack that you throw will result in a free extra attack from the ally. Have a character that seems weak by themselves (for example, a dagger-wielding thief-type), but who can attack twice in a turn, and suddenly their ability to earn two extra attacks out of the party’s big damage dealer makes them one of the most effective tactical weapons on the map. The best tactics RPGs are those that encourage you to really use the space and move pieces around like you’re playing a masterful game of chess, and Triangle Strategy understands that better than most (if not all) of the genre. 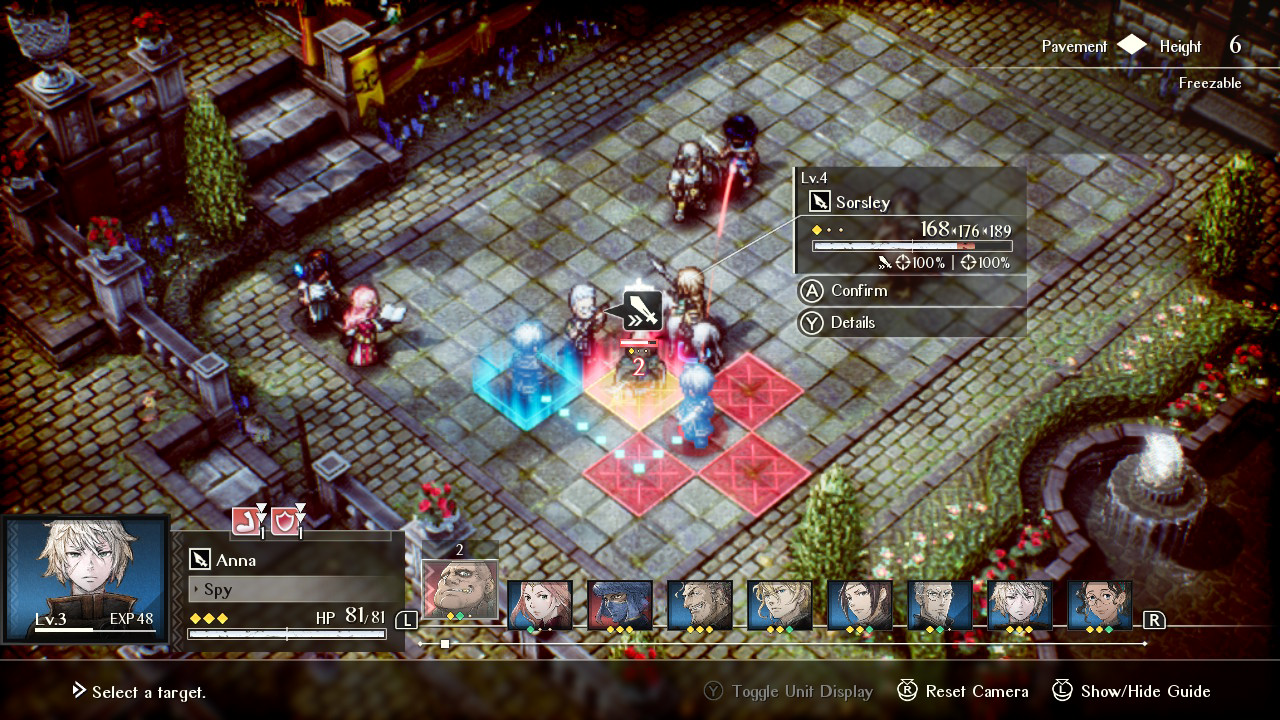 Finally, I would be remiss if I didn’t talk about the aesthetics, because this game is an absolutely gorgeous combination of HD sprites and elegant, detailed portrait art. There are going to be some that dismiss Triangle Strategy as “retro”, but it’s actually a far cry from something that you would actually consider to be retro-styled (Mercenaries: Chronicles, for example). Even in comparison to Octopath Traveller, which uses the same visual engine, Triangle Strategy feels so modern in the hand that it’s hard to imagine that nostalgia was even the goal of the developers. Rather, it comes across as an aesthetic decision to use sprites to encourage the player’s imagination well beyond the constraints of a video game for a project that is just this epic.

On the surface, Triangle Strategy seems like a straightforward and even no-frills homage to the tactics JRPGs of yesteryear. It has clearly been developed to tap into the same qualities that made Final Fantasy Tactics such a beloved classic for so many years, but there is more to it than that. With the tone and structure of a historical epic, Triangle Strategy is much denser and more demanding of its players than many might go into expecting. Engage with it on that level, however, and it’s one of the finest examples of the genre you’ll ever find.