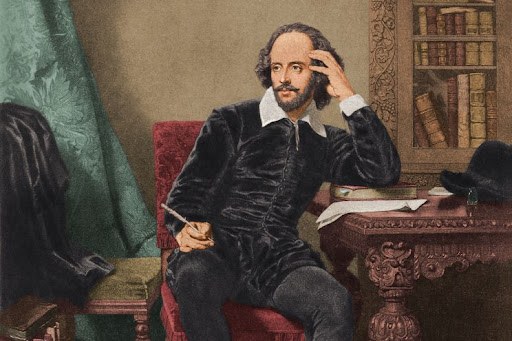 Playing through Ryan North’s To Be Or Not To Be this last week has reminded me of just how infrequently we see Shakespeare used as source material in video games. There are more Tom Clancy video games than Shakespeare video games, and even if I was the most rabid, right-wing American nationalist in all of the world I still wouldn’t try and argue that Tom Clancy is of the same calibre as an artist as Shakespeare.

It legitimately strikes me as strange that we don’t see more Shakespeare-themed games. After all, Shakespeare does have it all. You’ve got violence that would make Call of Duty blush (Titus Andronicus). You’ve got historical settings to turn into massive open worlds (Henry IV). You’ve got horror in decrepit castles in far-flung corners of the world (Macbeth), and you’ve got the kind of women characters that Japanese fan service animes would love the opportunity to take a crack at (Romeo and Juliet). Shakespeare is nothing if not adaptable.

And so, here are some ways that I reckon Shakespeare would work just great in video games. If anyone wants to throw me a bunch of cash to make these games I’d be happy to oblige.

Juliet, Prospero and Hamlet team up to take on Macbeth’s legions, but midway through the battle Richard III attacks them from behind and Titus drops a trap that turns the whole thing into a bloodbath. Try telling me you wouldn’t play Koei’s latest Warriors spinoff.

2) The (totally not-Jewish) Merchant of Venice

You’d want to remote the anti-semitism from this game, because that’s just not cool like it was back in Shakespeare’s day, but you can use the rest of the material as the awesome basis for a business simulator. Get enough of an empire going and eventually you’ll be able to demand a pound of flesh from some poor dweeb that owed the wrong people money.

Let’s face it, the opening chapter of the first Nioh, where William Adams is exploring a very European castle, is exactly what a Macbeth Soulslike would look like. And how good would that be! I’ve already got the final boss down, too – a giant, floating, disembodied hand with a big, bloody spot right in the middle of the palm.

Let’s face it, Romeo and Juliet is a very thirsty play. First, Romeo wants to get his end wet in Rosaline. That doesn’t happen, so Mercutio, who Romeo is one decision tree response away from turning for, suggested they gatecrash a party, where he meets Juliet, and immediately wants to get it on with her too. Right there you’ve got ace material for a dating simulator with the boy’s love ending, two fanservicey endings, and at least two bad endings. One of them would be Tybalt and Juliet getting it on in front of Romeo because this is a Japanese fanservice game we’re talking about here so cousins screwing is a thing.

I’m entirely serious here. You put a gun in Titus’ hands and Doom starts to look like a pleasant game for pacifists.

I hate to suggest anything in this series right now because if I like the idea Ubisoft is almost certainly going to ruin it by shoving NFTs and/or pointlessly bloated open worlds into it, but Henry IV is the perfect setting for an Assassin’s Creed game. It’s full of interesting characters, and the main boy – Hal – who would no doubt be the protagonist, has one of those character arcs (useless to hero) that video game developers love.

The Tempest is a good play. It also has a wizard and a fairy and a monster and stuff in it, so it has all the core ingredients to be a nice JRPG! Some of the play’s core themes include revenge and betrayal (boss battles!) while other themes include the importance of family (new party member get!). The play is even set on a conveniently remote island, which means you can open world it without needing fake walls at the edges of the playable space, if you want to go down that route.

8) The one rightful king

Okay, let’s talk spinoff games here. There are a lot of history plays in Shakespeare’s portfolio – Henry, Richard, Caesar, Antony, Edward, John. Why not have a battle royale between them all to decide once and for all who is the one true king? Some of the characters even have iconic weapons associated with them (Richard is often performed as carrying an axe, for example). We got some Soulcalibur weapons action going on there!

Google “anime Romeo & Juliet”. That’s just a start. You’ve also got Cleopatra (obviously), Cressida, Lady Macbeth (everyone loves the goth), Kate and Bianca from Taming of the Shrew (or Ten Things I Hate About You, take your choice), Rosalind and Beatrice. You think Dead or Alive has the cast to pull off beach volleyball fan service? They have nothing on Shakespeare.

Finally, everyone loves a good crossover, so while we’re busy making Shakespeare games, we should probably consider the expanded IP and set things up for the first crossover event. I think Faustus Vs. Hamlet would do well. Cinema has its cinematic universes? Well, we’ll show them with our Elizabethan Playwright Interactive Universe… yeah okay I need a catchier name, but seriously how could would Hamlet landing a palpable hit on the mad devil worshiper be?

And that’s it! As you can see I’m clearly a genius that has thought deeply about these things, so you should now give me money to make them happen.