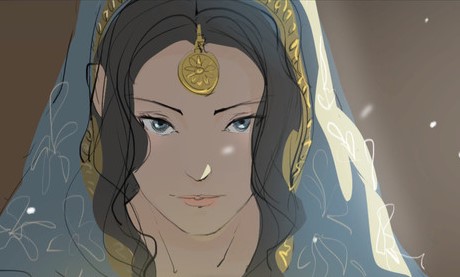 Blood On The Snow

You get the feeling that the developer is being very modest and hedging against a pushback with Blood On The Snow. “Sloppy art and bad spelling,” as the game’s description promises, is the kind of self-deprecating humour you throw in to protect yourself against criticism when you’re not confident about a project. But the developer should indeed be confident about Blood On The Snow, because this game jam submission and early release version, looks excellent. 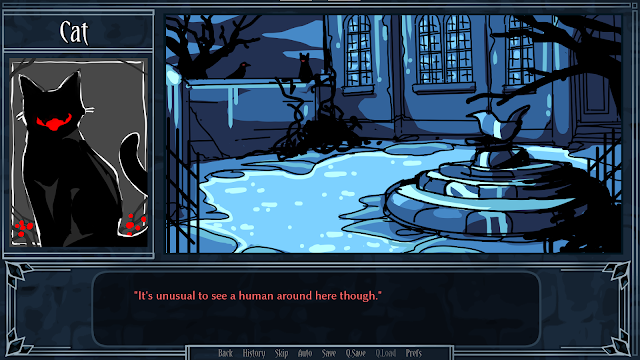 Created for the Winter VN Jam 2021, this “name your own price” edition allows you to play the first four of six different endings, and explore the full extent of an abandoned frozen castle. While it may be a visual novel, I actually get a strong “modern Shadowgate” vibe from this thing, and that’s great because I love Shadowgate with a passion that would… well, melt the ice in the castle. The “demons that may or may not want to eat you” is a good final feature. I do love demons. The game is very much in ongoing development, but if the art catches your attention, be sure to support the developer as they continue to work on it.

Entry #2 to the 2021 Winter VN Jam, Garden of Seif: Curse of Gravehollow Peaks is asking for a couple of dollars from players, for a visual novel that is short and sweet (about an hour’s play), but with three different endings and production values that include cinematic cut scenes. It looks to me like the developers are hoping for some sales to help support the “main game,” Garden of Seif, with this being a side story, and given the production values, I’m quite keen to support it. 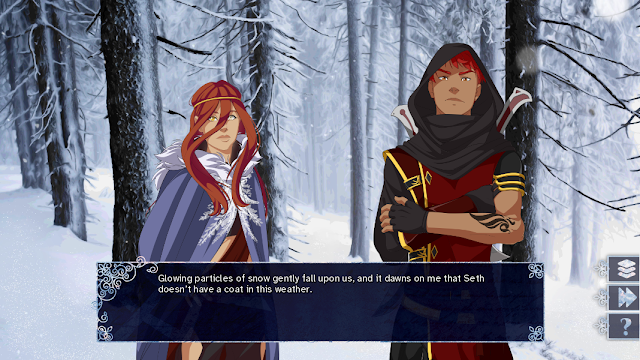 The game has a fun concept: Two enemy assassins wind up lost in the snowy Gravehollow Peaks, and there’s a curse that will potentially trap them there forever. So, can they put their rivalry aside to escape? Let’s read on! With an art style that is strongly reminiscent of The Banner Saga, Seif might be a completely different game, thematically, but if the writing can match the art to any degree, this could be quite the special way to whet your appetite for the full game that’s coming later on.
On Poetic Ties: A Poetry-Prompting Adventure

I absolutely love the concept of this game. Poetry will be one of those things that is a sad loss to culture if it disappears (and certainly with publishers less interested than ever and the reading audience for poetry aging rapidly it seems like it’s on its way out). Good poetry is pure artistry, combining rhythm, tone, aesthetics and literary techniques in such a way, and to such great density, that it can inspire and compel like no other. Poetry’s a bit “high art” for video games, though, so the rare game that actually engages with the form is noteworthy and inherently interesting. 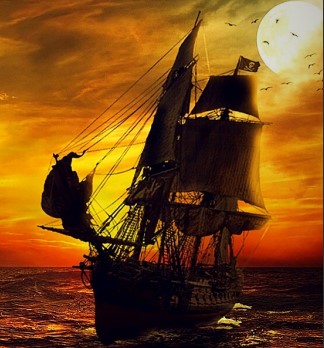 On Poetic Tides challenges you to create a poem from scratch using 20 cards and a piece of paper to write on. Basically, it’s like those Story Cube games, where you roll dice and need to write up a story based on what turns up. Only here it’s cards and poetry. The developer is also being incredibly generous, outright asking for people to make use of the source to make their own takes on it. I do like it when developers encourage the community to get creative with their work.
Sands of Salzaar
This got a release on Steam very late last year, but has just landed on itch.io, and it seems like it is very much my jam. It’s an indie take on the Mount & Blade formula, and it’s set in a fantasy Middle East-style setting. I do like my Arabian Nights, I do.
The developers promise a dynamic open world that evolves around the player and “lives” outside of their actions (much like Mount & Blade), promising an experience that will never be the same twice. You’ll be able to recruit and train a large force of units, and then upgrade them through a series of skill trees. Then you’ll be taking them into battles ranging from small-scale skirmishes right through to epic siege battles. It all sounds absolutely brilliant.
– Matt S.
Editor-in-Chief
Find me on Twitter: @mattsainsb