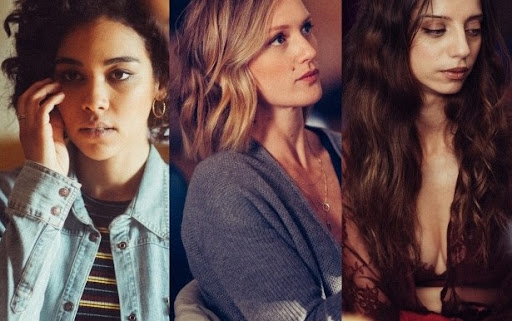 List by Lindsay by Lindsay M. and Matt S.
You know that feeling when you start something, and instantly wonder why you didn’t do it earlier? I can apply to chores, conversations, vacations, or in this case, writing. I’m obsessed with FMV games, I review several per year, I play even more than that… yet I’ve never done a list of the top FMV games? I’m downright ashamed! FMV games have a long history, and began with literal videotapes. I came into them much later than that: in 2015, I played my first FMV game, and from that point I was in love. What I like most is that there’s the narrative of a game combined with the medium of video, which often leads to gameplay that isn’t physically tedious for me.
And so, without further ado, here it is: our list of the best ten FMV games of all time (though it will skew towards more recent titles). Matt S. has strong feelings towards a couple of older FMV games, so he’s adding his two cents with the last two titles.

Her Story
(Read our review here)

When I say I discovered FMV games in 2015, this is the game that did it for me: Her Story. Sam Barlow is a masterful storyteller (you’ll see another title of his on this list), and I often spend years anticipating his studio’s (Half Mermaid) next title. In Her Story, players take on the role of someone trying to solve the case of a missing-turned-murdered person. The gameplay involves watching interviews with the murdered man’s wife from 1994, finding keywords to search other videos for, and then repeating the process until the game asks if you’re done (you can always say no and keep digging). I literally kept a written list of words in a notebook next to me just to stay on top of things. There are some pretty big twists and turns along the way, keeping the player on their toes until the very end. Finally, after completion, there’s a nice big twist, making the narrative that much more impactful.

The Infectious Madness of Doctor Dekker
(Read our review here)

I’m pretty sure I start drooling at the mere mention of The Infectious Madness of Doctor Dekker. It’s weird to describe a supernatural psychological thriller as drool-worthy, but I get so excited at the chance to talk about it I can’t help myself. Seriously, never mention it around me unless you want me to launch into a very long-winded description of the developer behind the game, D’Avekki Studios. D’Avekki Studios is a husband and wife team (I’ve said it before and I’ll say it again: couple goals!) that made murder mystery party games before its foray into video games. The Infectious Madness of Doctor Dekker was the studio’s first game, although you’d never know it based on the game itself. The player becomes a psychiatrist taking over for a missing man, the now-infamous Doctor Dekker. His patients all seem relatively normal at first glance, as you ask them questions about their lives and their situations. As time progresses, most of the characters’ experiences get really dark, and it starts to seem very likely that one of them had a hand in the death of Doctor Dekker. The game is inspired by the works of H.P. Lovecraft, although it takes some time to understand how that works.

The Infectious Madness of Doctor Dekker ended up actually being the start of a trilogy, with The Shapeshifting Detective being the second title. It moves the story from a single room to an entire town, where a young woman has been murdered and three psychics passing through are the main suspects. We never really know who the protagonist is, although they seem to be some sort of undercover operative. They have the ability to shapeshift into any other person, which makes getting information from persons of interest significantly easier than it would otherwise be. The big question: who is the murderer? And there’s no one answer. The game has multiple endings, and which one occurs is completely random. I’m nor normally a trophy hunter, but I needed to get all of the trophies for The Shapeshifting Detective to be sure I didn’t miss a single bit of it.

Dark Nights with Poe and Munro
(Read our review here)

You didn’t think I’d include the first two games of a trilogy and not the third, did you? Dark Nights with Poe and Munro focuses on two relatively minor characters from The Shapeshifting Detective. Poe and Munro are radio hosts, and you won’t believe the kind of adventures they have as a result. There is this sexual energy that pulses between the two, as Poe is cheating on his wife with Munro. Their adventures (misadventures?) are supernatural in nature, and each specific story is in its own chapter. The game is a bit spooky and quite mysterious, while still having an air of humour the entire time. Different choices will result in different outcomes, so the ending isn’t random: it all depends on what the player does. My favourite chapter involves art, and I bring that up because D’Avekki Studios next game is Murderous Muses, set in an art gallery. I bet that game will go on a revised list next year.

Erica is successfully combines point-and-click adventures with live video. It is yet another murder mystery, as Erica ends up at a place with great importance to her murdered father. Erica’s narrative is solid, filled with tense moments and fast decisions. What sets Erica apart, though, isn’t the narrative: it is how you play the game. It’s all gesture-based, so for the PlayStation 4 version, the player uses the trackpad to control the entire thing. Or they can use a phone app, which is how I chose to play. Gestures are based entirely on what you’re doing; the example I give in my review is swiping up diagonally to open a lighter, then horizontally to start it. It’s such a clever control system that really helps you connect with what is happening on screen.

The Complex
(Read our review here)

Falling into the genre of interactive film, The Complex is about nanotechnology, and the story begins with a bioterrorism incident. The affected person is locked down into a sort of glass coffin for the living, while all others avoid her like the plague. The weird thing about The Complex is the timing of it. The game was released just after the entire world shut down due to COVID-19. I remember sitting there, playing a game where everyone is terrified of being infected, and thinking how small the world really is sometimes. The mystery of the whodunnit is at the core of the narrative, but the real joy is watching two of the main characters and their sexual tension (they knew each other long before now). The protagonist, Dr. Tennant is played by Michelle Mylett (a Canadian best known for the most Canadian contemporary show, Letterkenny), a shining star and the initial reason I was drawn to the game. Kim Adis (known now for Get Even) is the infected girl locked in the glass coffin. There are twists and turns, and quick decisions to make that can save the lives of millions – it’s kind of stressful! In the best way, of course.

The director of The Complex, Paul Raschid, did a dramatic 180 for his next video game: Five Dates. Five Dates was entirely filmed and produced during quarantine, a remarkable feat that was reproduced a handful of times by various companies (although in all honesty, it was never this good again). Vinny is a single guy in a the modern world, which means he has to deal with quarantine like the rest of us. There’s only one way to date during a pandemic: online! Vinny starts by dating five different girls (Shaina, Grace, Maya, Saffron, Paige) and whittles it down to find the girl of his dreams. The player controls Vinny’s choices, from which girl to date to what words leave his mouth. Each girl is an individual, with her own preferences. Each girl also has more to her than is on the surface, so multiple playthroughs are worth it to learn the most about each of them. At a time where everyone was yearning for social interacting, Five Dates filled that void a little bit.

It’s time for another game by Sam Barlow (Her Story)! Telling Lies is the most recent, and the first by Half Mermaid. It uses a similar gameplay mechanic, with the player taking on the role as Karen Douglas, a former FBI agent, searching through a stolen hard drive for videos using specific keywords. The narrative is pieced together through these videos, which are seemingly unrelated at first until you can step back and see the patchwork the combination of them creates. The goal is to discover why four people were under electronic surveillance, as well as why the protagonist is involved (another flashback to Her Story). Unlike Her Story, these videos all only include one side of a conversation with someone on another device, so it takes some digging to piece entire conversations together. No notebook is needed this time, as the game has an in-game memo feature, and that allows you to focus on the fascinating and compelling plot around spying and ecoterrorism.

Now I’ve taken over for the last two (hi, Matt here!), I want to first up mention the notorious Night Trap. Of course, you play it today and you wonder at how it could have ever been notorious, but it was and that certainly made it a forbidden fruit-style experience that appealed to young me. The game itself is really quite fun, too, being a Z-tier grindhouse-style horror film, with some silly interactive elements that allow you to manipulate the environment to try and protect a bunch of girls. Having that small degree of control over the environment only make it all the better nonsense.

Roberta Williams’ masterpiece was another controversial FMV title (it was banned in Australia and everything!), but has earned praise over the years for being a boundary-defining, incredibly well-written video game. Phantasmagoria is a point-and-click horror game, that uses real actors and performances (hence it being a FMV title). The scope and scale of the thing is massive – the script was 550 pages long and it took four months to complete all the filming. The result, however, was more than worth it – this was (and is) a brilliant piece of art.