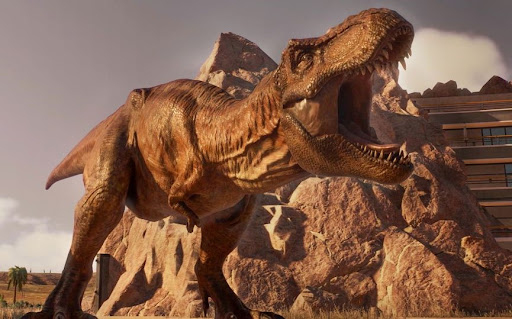 Barney the dinosaur is a jerk. I’m not so much talking about the purple monstrosity/kid’s entertainer here (though he is pretty insufferable), but instead Barney the Raptor is just an outright jerk.

Wants more Forest, then less. Wants more rocks, and also a live feeder so he can chase down and murder goats at will. Breaks limbs and catches mystery diseases if you look at him funny, not that you can, because he’s just broken out of his pen again while you were reading this.

Think Bullfrog’s classic Theme Park, but instead of the rides breaking down over time, the fences do, and then Barney is off on his ‘eating customers instead of goats’ nonsense again. 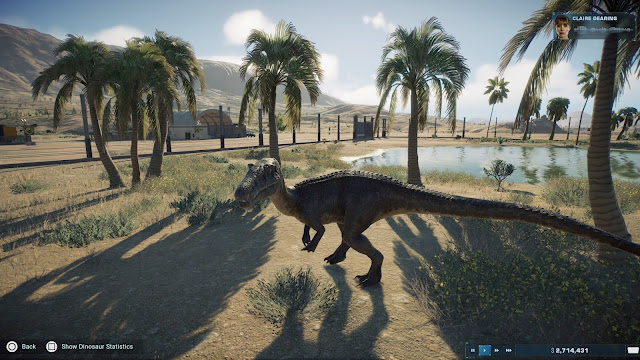 Jurassic World Evolution 2 breaks its game down into four modes, but sadly they’re not very particularly even quarters. Firstly, there’s the campaign mode, and rarely have I seen a game mode so poorly labelled. It’s not a campaign, it’s a tutorial with very fixed parameters that takes you through the game’s core engine and management systems.

There’s absolutely nothing wrong with having a tutorial for a complex management simulation of course, but no amount of overdubbed voice acting can change the fact that it’s a tutorial that you’ll play through once, and never again.

A quick aside here: Developers Frontier have spent some serious cash, not only on the licence but also to get Bryce Dallas Howard and Jeff Golblum to voice Claire Dearing and Dr Ian Malcom respectively. They’re very good with the scripts they’re given.

Significantly less excellent is their Chris Pratt sound-a-like, but presumably, he’s busy off voicing Mario these days. I’ll give Frontier Developments a pass on their John Hammond impersonator, partly because he’s reasonable, and mostly because they’d have to hold a séance to get Richard Attenborough to participate. 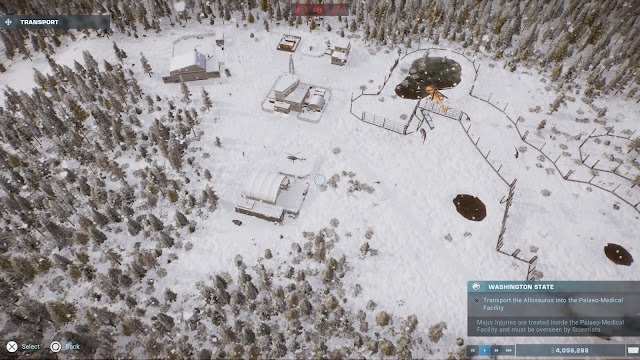 Challenge mode, meanwhile, takes what you’ve learned in campaign mode and tasks you with building a five-star park in a variety of settings, although you’ll have to unlock them as you go. It’s the most “pure” simulation part of the game in many ways, but it’s not the best part.

Then there’s Chaos Theory, a new mode that puts you in specific scenarios built around the existing Jurassic Park and Jurassic World movies.

Could you make a go of the classic Jurassic Park without it all going to hell? Anyone buying a Jurassic game is doing so because they’re fans of the movies, and while the quality of those flicks varies wildly, there’s an absolute charm in being dropped into them while playing micromanagement god from the get go.

You’ll quickly learn to appreciate just how difficult it is to balance budgets, manage staff and stop Barney from eating everyone and everything he can sniff out. 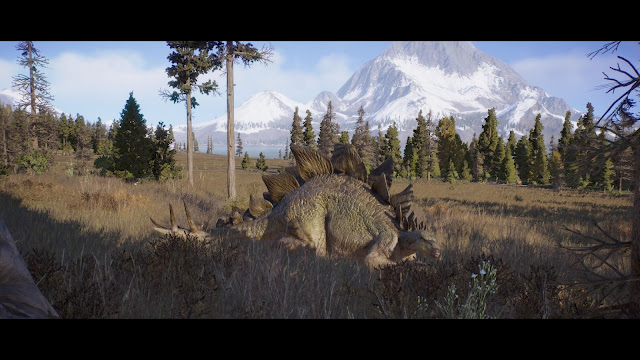 There’s a sandbox mode, but it’s frustratingly limited at first, because Jurassic World Evolution desperately wants you to play through all of the other game modes first in order to unlock all the sandbox parts. That’s not what I’m looking for in freeform sandbox game modes, typically, especially as some game modes are grindy, and financial failure is always a reality. Especially if Barney keeps eating people.

I tested the PlayStation 5 version, and while it’s often visually charming, which is to say that it’s just a lot of fun (and fiscally rewarding) to simply drive around your park and take photos of your recreated dinos as they fly, swim and run around your park and through your guest list…

Damnit Barney, we talked about this. Capture squad, tranquilise Barney, would you?

It’s very clear early on that the console versions have had controls bolted on via PC, with thumbsticks a poor mouse substitute. It’s playable for sure, but I can’t help but think that this would be a more enjoyable game on PC, simply because I’d be able to select, zoom and move with more precision. 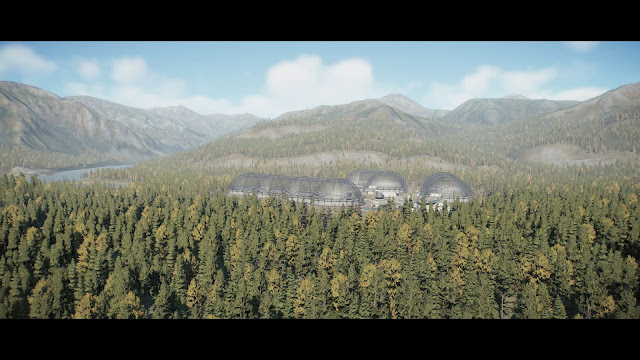 Jurassic World Evolution 2, like most management sims, is really about that critical balance between macro and micromanagement, with the added complications of… well… Barney.

Actually, while Barney’s a jerk, there’s also a balance issue that won’t sit well with every management sim fan in terms of the way Jurassic World Evolution wants you to manage your park.

It’s often bogged down by the micromanagement issues to the detriment of building out your park, but in weirdly specific ways. You have to hire specific scientists, and keep them happy lest they engage in a little industrial sabotage along the way, but the same isn’t true for the park rangers who monitor your critters and fix fences. They’re just nameless blobs, and so are your park visitors who bring in all that crucial cash.

Meanwhile, the fuel generators that keep Barney in his pen – mostly – have to be manually topped up on a rolling basis. I totally get that my generators need fuel to keep running, but I somehow doubt that John Hammond was personally jumping into a jeep every single time they ran low, or at least not hiring staff to do this for him. Run out of fuel, and Barney’s off again, not only eating the guests but also randomly snacking on any other dinos whose enclosures he can bash his way into. 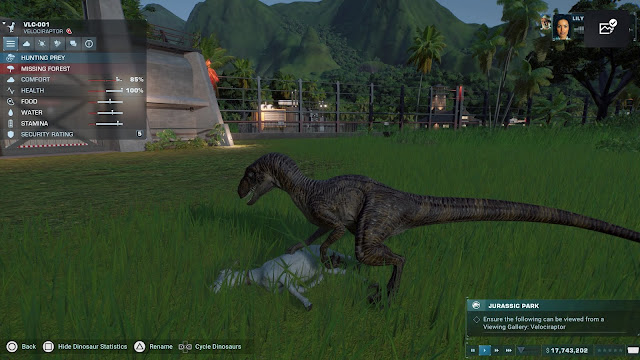 Is that very Jurassic Park themed? You bet it is, but the issue here is that all too often it can become an unrecoverable mess, which in a simulation/strategy sense isn’t quite as compelling.

Jurassic World Evolution 2 can be fun, and there’s absolutely a charm simply at watching the dinos frolic on the ground, through the air and in the aquatic zones you can build later in the game once they’re unlocked. However, you’re never going to lose sight of the fact that it’s all quite artificial, and the best way I can explain this is with trees.

No, they don’t talk to me, but most of them don’t exist, either. If you go into direct control mode of a ranger team, chasing down dinosaurs or photographing them for extra cash, you can drive and clip right through about 95 per cent of the game’s trees.

You’ll hurtle along, shattering the illusion of your park as you go, right until you bump into the 5 per cent of trees and stumps that do exist. 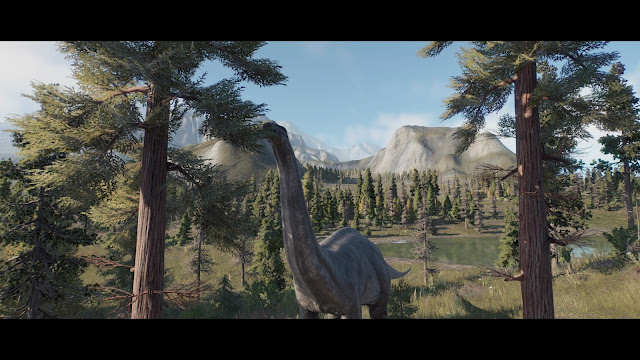 How can you tell them apart? You can’t, and the same is true of many of the game’s invisible walls. I get that the tree clipping thing does allow you to chase down dinos that could otherwise be inaccessible for regular vehicles, but it makes the whole exercise a lot less compelling than it really should be.

This then is the challenge with Jurassic World Evolution 2. If you’re a Jurassic Film fan who also likes micromanagement, there’s certainly enough meat on its dinosaur bones to keep you happy for a good long while. However, if you’re more just a management sim fan, you’ll probably find its quirky management style – sometimes hands-on, sometimes hands-off – a tad irritating, as well as the limitations of its console controls. On (finally) bringing Monster Rancher back