We often assume that it’s the AAA-blockbusters that get people most excited. That might well be true overall, but as this week’s poll shows, within the niche audiences that follow us on DigitallyDownloaded.net, the truly exciting games come from elsewhere. 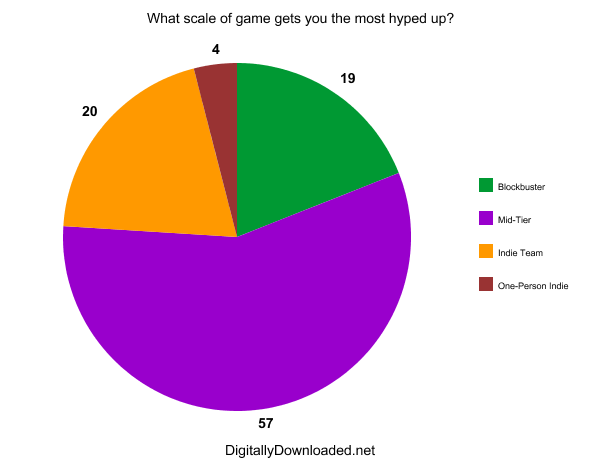 As you can see, it’s actually the mid-tier games that tend to get people excited, with 57 per cent of respondents saying that those were the games that they got most hyped up about. Mid-tier games would include the publishing efforts of the likes of THQ Nordic and Kalypso, as well as most Japanese games aside from the very top-tier Final Fantasies and the like.

Second place in the poll went to games created by a small team of indies – think Hades or your typical visual novel project there. That category scored 20 per cent of votes. Close behind were the blockbusters themselves, with 19 per cent of the votes.
Finally, the one-person indies got just four per cent of the vote. However, one comment on the polls rung quite true to explain this – with the smaller indie projects, we very rarely get the chance to get hyped up about them. We typically find out about those games at release, or just before, and the lack of “hype” around them probably has more to do with the lack of marketing and PR budgets than it does the lack of interest in the space.
I’m certainly not going to pretend that this poll is indicative of anything broader – if you were to run this on an IGN or similar the blockbuster would overwhelmingly win. It is, however, warming to see that there are audiences, however niche, that not only play the games “below” the blockbusters, but actively look forward to them. More than 4/5ths of DDNet’s readers like games that, unable to compete on production values, rely on creative ideas instead, and that’s a healthy sign for gaming as an art form.