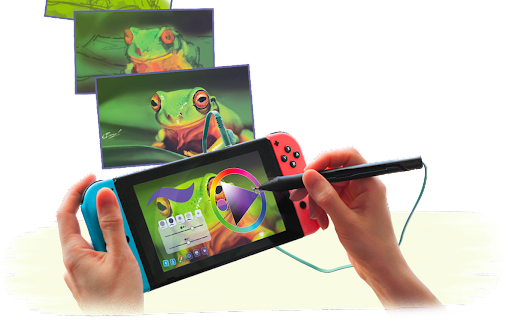 I like to think I’m a decent writer. I’ve published a book and stuff, so I don’t think that’s an idle boast. I also know I’m pretty good at sport, because I’ve had national rankings in two separate sports. I also know my way around a music keyboard, I am a better-than-amateur photographer, and as much as capitalism annoys me, when I need to wear a suit I can hold my own at executive roundtables and whatever. I have a postgraduate degree in marketing, after all. I’m reciting my resume here because I’m about to show you one thing that I desperately wish I was better at but I’m just… not. It’s my art. No one is going to be converting my artistic efforts into NFTs, I can tell you that right now, and it sucks, because I really enjoy drawing and just wish that the end result didn’t fill me with self loathing.

I do enjoy art. I love the process of painting, and I certainly love looking at it, and one of the reasons that I get so much art of the DDNet mascots commissioned is because I want to live vicariously through their work. I’ve also tried – more times than I can count – to learn how to do it, but whether it’s formal teachers or Nintendo’s Art Academy tutours, no one has figured out how to re-wire my brain to suddenly figure this stuff out. I still buy art tools and tutorials – as I’ve bought Colors! Live, here. But I never expect to actually be able to engage with these apps in the way that’s intended.

I already enjoyed the Colors! property, having spent a lot of time admiring other people’s galleries on the Colors! 3D online galleries, but being nowhere near brave enough to stick my own work up there. Apparently the whole venture from the developer was a success, though, because nine years later they’re back on the Nintendo Switch, and with a fun little gimmick that I just had to try. Colors! Live has a proprietary stylus pen that promised pressure sensitivity and a smooth brushing experience that wasn’t going to scratch the surface screen of your console. With that pen firmly in my hand I was able to draw this… masterpiece… that I like to call “The Beach”: 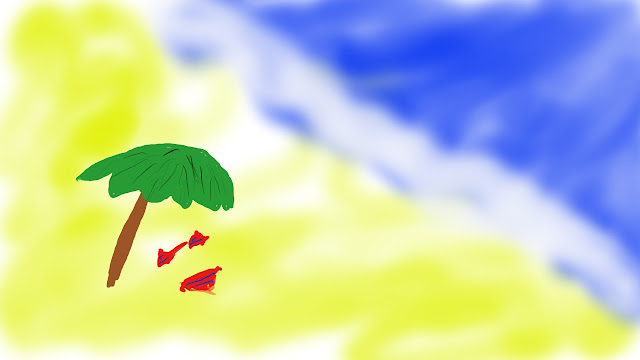 And now you know why I would rather use 1,000 words than paint a picture. That truism phrase never accounted for people like me.

Anyhow, as utterly incompetent as I am at painting, I can confirm that the stylus is a lot of fun to use, and a decently designed tool. It looks a bit naff, since the tip of the stylus has a plastic cap that, no, you’re not meant to remove, but it does indeed feature a fine degree of pressure sensitivity, and it does glide across the Switch’s screen beautifully. The pen itself is large and comfortable to hold, and when it’s activated, you can even rest your hand on the Switch’s screen without risking the hand leaving unwanted marks on the painting. There’s even a handy shortcut button on the stylus which allows you to pull up your Colors! color wheel on demand, and that makes switching between virtual brush types and colours a snap.

Really, the only downside to this stylus is that the nibs, which are replaceable but will only last 100 hours, according to the instructions. What happens then I’m not sure (I can assure you, as bad as my beach art is I did not spend 100 hours working on it), but I would assume that it will start to lose pressure sensitivity and its glide on the screen. The base pack has two nibs, and the Colors! Website will allow you to purchase packs of three “soon.” It doesn’t have a pricing guide yet, but given that the stylus itself is only $25, I can’t imagine these nibs will be too expensive to order and store for later use. Despite that, 100 hours of use for a nib did seem brief to me, but then I realised that all art supplies eventually wear out, and if this was really the only way to get this kind of functionality into an art app for Switch, then so be it. 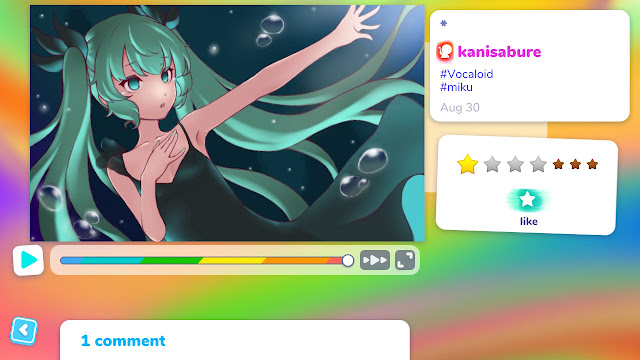 Scrolling through the gallery I can see that there are a lot of talented people creating a lot of high-quality art, and one of the beautiful things about this app is, if you are a serious student of art, you can actually watch a full replay of how the art work was created. It doesn’t mean much to me – there’s no saving my artistic skills – but I can easily see that process being both fascinating and useful for the artists’ peers. The online gallery is fully-featured, with hashtag searches, ratings and a comments system, and it seems like it has been pretty well supported over all these years (with an obvious new wave of art given the new application on the new console).

One final feature that’s worth noting is “Colors Quest” mode. This is a well meaning mode, I know. In it, your goal is to make it across a map of painting challenges, doing a little bit each day against some restrictions placed on you. The first one is to, within 20 minutes, paint something that represents “a first step”. The idea here is that by doing a little bit of painting each day, on subjects that you wouldn’t necessarily use, with limitations in how you can go about it, you will actually develop your artistic range and skillset. I know this kind of approach works, because I’ve taught causes on creative writing, and one of my favourite tools is to use Story Cubes to task people with coming up with compelling stories using random objects and themes. Write a 1,000-word story that way every day and it starts becoming very easy to do so, and the stories themselves become more interesting to read. So I get where Colors Quest is coming from. However, I took one look at the word “stairs” and noped out of that minigame. Stairs are well beyond my drawing talent.

Look, obviously if you’re a serious artist, then you’re going to want to look at Wacom and not a cheap little app and toy stylus for Nintendo Switch. However, the Wacom tablets are also serious tools and to suggest that there isn’t room for an app like Colors! is like telling anyone who enjoys creative levels in Super Mario Maker to download Unity instead. Sometimes you’re not going to be in the mood to try and create the Mona Lisa. Colors! Live is fun to use, and for people that are just getting started in art, or who just want a low-stress way to sketch up their fan art and doodle, the combination of surprisingly robust stylus and nicely designed application will be difficult to ignore. It’s not going to be the app that turns me into a great – or even decent – artist, unfortunately, but I still had fun with it.