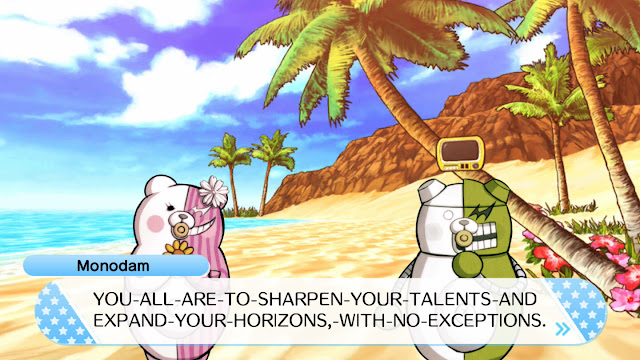 In the game, the gifted students further develop their talents at a summer camp. They will also discover Hope Shards by completing the boardgame, one for each completion. Ten Hope Shards will progress the main story. There are different types of squares on the board. The growth square gives out experience points; later islands give out more points. When in doubt, go to the growth square! Battle squares trigger battles with monsters resembling Monokuma known as Monobeasts. Winning will grant experience points, but losing moves the player back to the beginning of the board. Event squares trigger, well, events. Some events have multiple options and multiple outcome possibilities. Friendship squares trigger interactions between characters; they will sometimes be from different games, and this is the only time the interaction could or would take place. Other squares include the card square, the shop square, and the talent square. Characters are developed into one of three types: athletic, cerebral, and balanced. Each has its own special ability that will trigger randomly on the field. There are also type-specific battle commands that can be used once per battle. Well-developed characters can participate in the Tower of Despair, a 200-story tower-based battle mode.

Danganronpa S: Ultimate Summer Camp will be available alone (same with the other three titles) or as part of Danganronpa Decadence (which includes all four games). Danganronpa Decadence will be released physically and digitally for Nintendo Switch on December 3. Lone titles will be available digitally only. There is a pretty spiffy collector’s edition that includes the games, a cloth posted, a soundtrack, three lenticular prints, and a metal outer box.

Redo is a world devoid of guilt. There is, however, a mysterious virtuadoll known as Regret. Those her hear her songs are snapped into another world. A world that gives you a second chance at the life you could have had. X, another virtuadoll, also wants to turn the world on its head. She chooses the main character as her partner, giving them a new power. Both work to find new members who slowly start remembering the real world. NIS released a new trailer for the title this week. Here’s the trailer about the many, many, MANY characters and Obbligato Musicians.

Pokémon Legends: Arceus seems like an exciting step for Pokémon, as it changes some of the usual combat/capture mechanics used in other titles. Nintendo and Game Freak have been giving us lots of information leading up to the title’s 2022 release date, but for whatever reason this information is more exciting than most. A new trailer focuses on what happens outside of battle. Take a look here:


In-game, players will reply on the Arc Phone that contains some sort of strange power and will help guide them on their quest. Some Pokémon are larger than normal Pokémon and have glowing red eyes; these are alpha Pokémon. They are strong and they are aggressive if players get too close. There are also Pokémon nobles, creatures that have received a mysterious blessing and are particularly powerful. These nobles have started flying into sudden frenzies, making them difficult to rein in without the help of others. And for the first time, players can ride on Pokémon! This almost seems counter-intuitive, as they are your partner and not your animal companion, but whatever. It’s super cute. The Celestica Flute is received during the game, and calls special, rideable Pokémon: Wyrdeer, Basculegion, and Hisuian Braviary. Jubilife Village will be home, and houses a clothier, a hairdresser, a photo studio, a general store, craftworks, and pastures.

Developed by Game Freak in conjunction with The Pokémon Company, Pokémon Legends: Arceus is set to be released on January 28, 2022. It will be a Nintendo Switch exclusive, surprising no one.

It’s well-known that some of us at DDnet have a big, and reasonable, issue with game subscription services. Apple Arcade, Xbox Game Pass, etc. – the pros and cons stack up quickly. Recently, Netflix announced it would be making an entrance into the world of video games, at no extra cost to subscribers (I’ll believe that when I see it). Until now, we haven’t really known what they’re planning. Yesterday, Night School Studio announced that it had been acquired by Netflix. 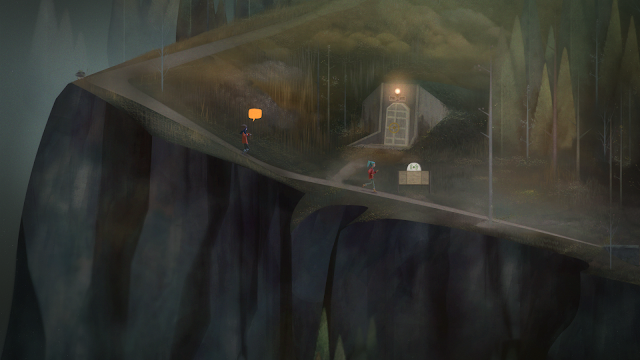 Night School Studio is the developed behind Oxenfree (available now) and next year’s Oxenfree II (coming to PC via Steam, PlayStation 5, PlayStation 4, and Nintendo Switch. Oxenfree is quite charming, especially for a supernatural mystery. The game has zero cutscenes, and the story is told via the gameplay itself. Alex and her friends are heading to a remote island for  weekend party. There are rumours that near the caves, certain radio frequencies can trigger supernatural events.

Sean Krankel, co-founder of the studio, released a message regarding the acquisition. It reads, in part, “Night School wants to stretch our narrative and design aspirations across distinctive, original games with heart. Netflix gives film, TV, and now game makers an unprecedented canvas to create and deliver excellent entertainment to millions of people. Our explorations in narrative gameplay and Netflix’s track record of supporting diverse storytellers was such a natural pairing. It felt like both teams came to this conclusion instinctively.”