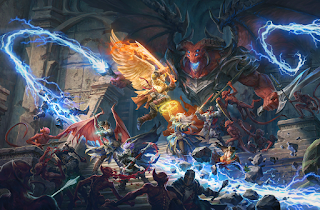 While the Dungeons & Dragons property is in shambles, as far as video game adaptations go, other classic tabletop RPG properties are faring much better. One such example is Pathfinder. Pathfinder started life as a spin-off of Dungeons & Dragons, but in video games, the recent Pathfinder: Kingmaker may as well have been the true continuation of the classic Baldur’s Gate. Now the same developer, Owlcat Games, is back with Pathfinder: Wrath of the Righteous, and based on this developer diary it is shaping up very nicely indeed.

The developer also used this developer diary to bring the welcome news that the game would also be coming to PlayStation and Xbox consoles, for those of us that prefer to play games that way. Wrath of the Righteous will follow in the stead of Kingmaker, giving players classic isometric, tactical RPG gameplay and, if it is anything like its predecessor, there will be a lot of it.

Wrath of the Righteous will launch on PC on September 2, with the console version coming later in the year.

Get a first look at Dynasty Warriors 9 Empires (in Japanese)