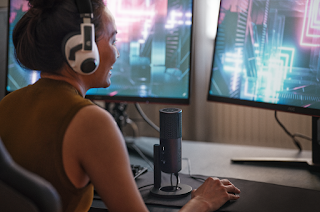 I’m doing more and more streaming and video work these days. It’s difficult to engage with video games without doing some of it, and I figure, if you can’t beat ’em, join ’em. I’ve also been using an “old faithful,” decade-old Blue Snowball microphone to do so, and while it has been reliable and trustworthy, I have been on the lookout for something a little more tailored to the way video games are done these days. Enter the EPOS B20. This thing is excellent.

Related reading: I pair the B20 up with the EPOS H3 headset for all my video recording and streaming. Check out my review of that headset here.

EPOS positions the B20 as an easy-to-use, plug and play microphone, with all the necessary features to make streaming a pain-free experience. Now, I didn’t go into this review without apprehensions; the quality of the microphone has been one of the few issues that I’ve had with the EPOS headsets that I’ve tested in recent months. Thankfully, that concern didn’t last long at all. When EPOS has focused on the microphone technology, they’ve delivered in a big way. I’ve used the B20 for a couple of streams and videos over the last week, and it will be my default microphone going forward.

The big issue that it solves – and I am so happy with this – is that it drastically cuts down on my breathing sounds. I know that I’m a fairly loud breather into microphones, and I’ve done some crazy things over the last few years of recording, like trying to hold my breath as I talked, to limit that gasping for air effect that the Blue would pick up and, to my endless irritation, seem to amplify manyfold. The B20 greatly cuts down on that effect and on that basis alone I have found the switch has improved my videos. On top of that, the Blue microphone was not “streaming friendly” as it would create all kinds of echoes and distortions if I played the game that I was streaming with sound on. So I was forced to play without hearing the sound myself. The B20 has been designed around that so now I can actually listen to the game as I stream it. I realise that these are small and in many cases expected features of microphones in 2021, but the ease in which the microphone dampens the breath effect and allows me to stream with a proper set-up isn’t something to overlook; I was able to find the “sweet spot” settings for most games after no more than ten minutes of tweaking, and therefore EPOS has hit the plug and play brief perfectly. 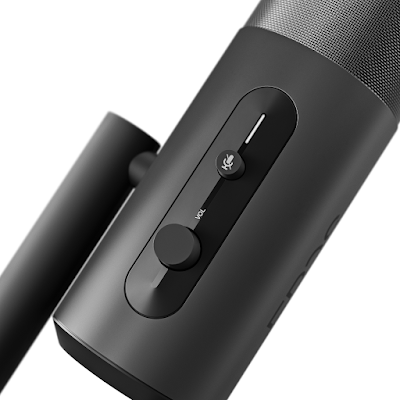 A headphone jack allows me to plug a headset in and observe in real-time whether the stream is performing to audio expectations. On-the-mic controls allow me to instantly mute, or adjust the pick-up patterns to take into account the environment that I’m streaming or recording in. The mic plugs in via USB, can be tweaked further via EPOS’ management software, and I had absolutely no issues with getting it working on both OBS and Audacity (my tools for streaming and general voice recording, respectively). I did try using it for less gaming-focused settings (i.e. Zoom and Microsoft Teams meetings), and for whatever reason Zoom did not like the mic, but everything else was, again, effortless. Finally, the mic has the necessary stands to be both elevated and hung on a boom, or rested on the table, as per your preference.

The microphone is omni-directional, picking up noise both front and back, and this is both a blessing and a curse. On the positive side, it means that positioning is less of a concern, and it’s much easier to set up comfortably, no matter the layout of the room (or how many people you’re streaming or recording with). On the other hand… my house isn’t overly well soundproofed, and with my setup, as I stream this microphone’s back now faces the entrance door and street. It’s much better at picking up the street noises, and since I live close to a school AND pub and live in a regional city filled with bored younger people, there’s unwanted noise to contend with during the day, afternoon, and especially evening, when all the bros come out with their sick-as loud vroom vrooms. Now, in messing around in the settings for long enough it is possible to improve the mic’s ability to shut that stuff out somewhat, but I would have appreciated a greater effort to apply the plug-and-play philosophy towards settings for those of us that don’t have the convenience of a studio environment.

But it does pick up and broadcast good clarity, and I really appreciate that. Perhaps the best proof I can offer with that is an Otter.ai test that I ran. For those who don’t know, Otter.ai is a transcription service that uses AI to automate the transcription. As it is AI-driven, it struggles to pick out words when the recording isn’t clear. I recorded the same couple of paragraphs using old faithful Blue and the B20, and the transcription did come out much clearer from the B20. 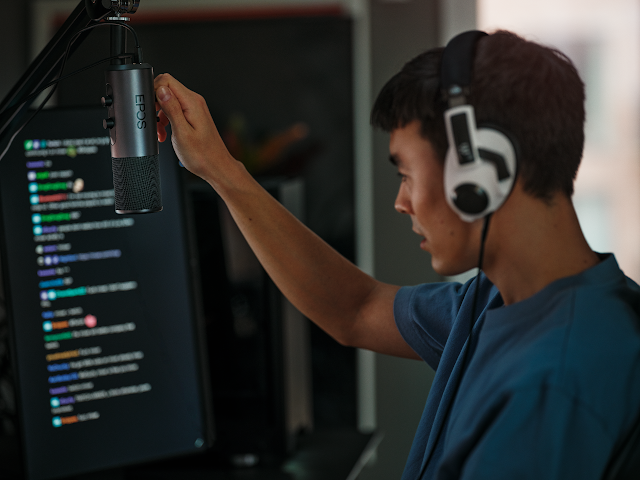 Finally, this is a minor thing, but the form-factor of the B20 is nice and light and reasonably compact, which will make it easy to carry around for on-the-go recording. I would have never taken old faithful with me to Japan, bulky and heavy as it is, but should the borders ever re-open, I’ll be packing the B20 into my kit, as it’ll be a big boost for interviews at TGS and the like (and it’ll allow me to continue working while on the trips). I haven’t tested this out myself as of yet, but it also seems like the B20 is robust enough to take a light drop or bump or two (I’ll let you know when I do – I do have a habit of dropping technology).

It’s actually kind of sad to retire something that you’ve used for so long, but my Blue microphone is definitely being retired in favour of the EPOS B20. This may be a very much consumer and amateur-level mic (retailing for $329 in Australia), so don’t go envisioning setting up a sound studio and shopping yourself out as a voice actor with it, but for the purposes of streaming and video recording to YouTube, the EPOS B20 is incredibly convenient and cleverly built around that purpose. For people getting into steaming or looking at starting a gaming podcast, this is an excellent and reliable first option that’s going to cover you right to the point where you’re ready to go pro.