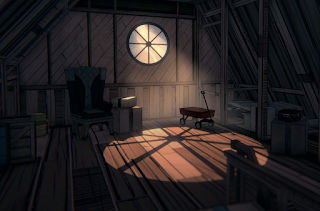 You’ve probably never heard of Dogubomb. Don’t worry, neither had I before, but if Blue Prince is anything to go by, this unusual developer is one to watch. I say “unusual” because Dogubomb is actually a commercial animation studio that works in and around Hollywood, but that just means that all that artistic talent is being put to good use here.

Blue Prince is “an atmospheric puzzle adventure with strategy and roguelite elements.” It’s going to be a PC game on Steam, with a release date of February 22, 2022 (that’s a lot of “2’s”), and while the top-line description sounds dime-a-dozen, the more detailed explanation makes the game seem much more interesting:

Simon has just inherited a large estate known as Mt. Holly, a location famous for its shifting rooms and puzzling floor plans. To him, the ever-changing nature of the house makes each day of exploring that much more exciting. Each door holds the promise of adventure and endless possibilities, as the rooms and mysteries beyond are never the same.

A whimsical House of Leaves, perhaps? It’s a bit hard to get a proper sense of what the game will play like from the early trailer (which you’ll need to watch here since for some reason it’s not on YouTube) which is there more to highlight the art and aesthetics, but that side of things looks absolutely gorgeous.

There’s still a long time before this game gets released, but we’ll be keeping a very close eye on it indeed.