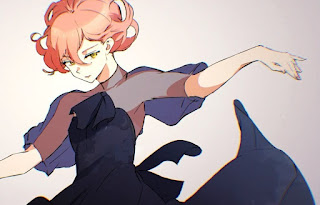 How often do we get a game that’s based on opera themes? Not often. How often do those games have talent of the calibre of Tokyo Ghoul’s creator onboard? Even less so. Jack Jeanne is one of those rare events, and it looks absolutely stunning.

It’s got a Shakesperean concept, too: A young woman desires entry to an exclusive academy, so she dresses as a male to get in. There she gets to meet a whole harem of pretty boys, and all of this occurs as they learn all about opera and ballet and other such high art. As befits the creator of Tokyo Ghoul, the overall aesthetic and tone has its creepy, dark elements too (as befits opera too, frankly).

The developer has released a number of new videos to highlight the various characters in the game. It’s all in Japanese because – and here’s the big sad announcement – this game still does not have a western publisher. So, c’mon Aksys, Fruitbat Factory, PQube, Eastasiasoft or whoever else might be listening, do us all a favour and pick this one up for release. It looks like it could be something truly special.