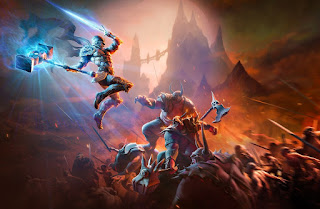 Kingdoms of Amalur is one of the better western RPG properties out there, and THQ Nordic did a good thing acquiring the rights to it from EA and then re-releasing it on PlayStation 4 and Xbox One last year after it seemed like it was going to be dead and lost. Now it’s coming to Nintendo Switch as well.

The game will release on March 16. Assuming that the port to the handheld is as playable as on other consoles, this will be the ideal way to play; as a “personal MMO” in structure and tone, Amalur will be the perfect on the go experience.

In addition to this news, THQ Nordic has announced an expansion to the game, called Fatesworn, later on in the year. This will be the first new Amalur material released since the first game, and could represent the stepping stone on the way to a Kingdoms of Amalur 2 (assuming it sells well enough to convince THQ Nordic that there is demand for it within the community).