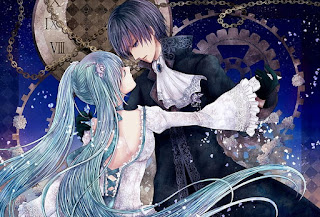 I don’t usually do news stories on single Twitter tweets, but this is just too cool so I’m making an exception. Over there on the Twitterland I saw a video of a motion-captured Hatsune Miku and KAITO doing a ballroom (Latin) dancesport routine.

As someone involved in dancesport myself, I have been waiting for someone to figure out how to make motion capture work in this way for vocaloids… if it’s not too expensive I would love to play around with it myself. It could be good for dancesport too. As a sport, it’s one that has been struggling to remain relevant in mainstream society, given that it’s not an Olympic event nor particularly appealing to mainstream youth in comparison to other forms of dance, but it is a beautiful, sexy form of dance, and if people were to see enough clips of Miku doing neat routines, it might just help introduce people to the sport.

Quite often in the past, I’ve written about our increasing ability to merge the digital and the real worlds, and manufacture reality around us. Miku was a pioneer at that, and is these days challenged herself by the explosion of virtual YTers, camgirls, models and so on. It’s clips like this that highlight just how far along we are with this. Take the data of Miku and KAITO here and with a bit of editing work you could easily add her to a real dancesport competition on YouTube… and that’s both impressive and exciting stuff.

On making games that blur the line between sex and horror