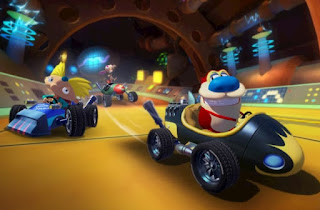 This is going to be a relatively short review, because there’s really not much I can say about it. Nickelodeon Kart Racers 2: Grand Prix is one aggressively fine game. It’s a character mash-up kart racer, derivative to Mario Kart to a fault, and your mileage with the game will depend entirely on whether Nickelodeon’s expansive roster of characters appeals to you. You’ll know exactly what you’re getting before you get into it, and the game delivers to each one of that expectation, but never exceeds it.

So, the game’s strengths, first: It’s a perfectly competent kart racer, structurally. The tracks strike the right balance between accessibility, so younger players can get in and enjoy it, while also offering enough technical elements that more advanced players can feel like they’re mastering something. There’s a good range of weapons and items, and while they lack the heritage and charm of iconic kart racer items like the shells of Mario Kart, they get the job done in creating chaos. There’s also “slime” that you can pick up to activate special abilities in-race once you’ve accumulated enough of it, and coins that both boost the slime stored, and can be used to unlock new engines back in the main menu. These are all balanced nicely so there’s never a moment in a race where you’re not managing items or special abilities.

The developers show that they’re students of Mario Kart in every way, with a slavish devotion to the same cup structure, the same blend of track types, and the same deep customisation system of the more modern Mario Karts. Where the developers miss the mark is the personality of the thing. I’m not the world’s biggest fan of Nickelodeon, but I know my TMNTs and Rugrats, and the big (big) problem that lets this game down is that those beloved characters are presented in such a pedestrian manner, with limited distinctive animation in-race, an absence of voice samples and quips, and even the victory poses on the podium aim for funcstional rather than the flashy. 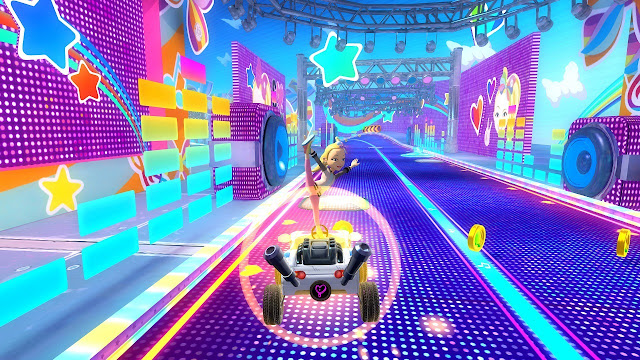 Any character mashup game lives and dies by the way it depicts its characters. It doesn’t really matter how competent the game is otherwise if it isn’t filled with energy and verve around the characters. Nickelodeon is very competent in almost every other way. The range of characters is great. Nickelodeon is one of the few properties that has a library of characters deep enough to really work as a kart racer. Most other properties need to get very creative here and scratch around for content, but for the developers of Nickelodeon Kart Racers 2, the challenge seemed to have been deciding which to exclude from the playable roster. On track, the game has a power sliding mechanic that is pulled right out of Mario Kart, and while it’s a touch more twitchy, it stills feels good to engage with, and fits well within the boundaries of creative license. There are all the requisite gameplay modes that give the game a premium feel. All of that good is unfortunately undermined by how flat the personality feels.

It would seem the community feels that, too. I’ve tried to play online a half dozen time over the last couple of days, and I’ve never got a game going. Either there’s an issue with me connecting, or there just aren’t that many people out there playing Nickelodeon Kart Racers 2.

There is nothing wrong with Nickelodeon Kart Racers 2. If you enjoy Mario Kart, and like Nickelodeon, then you’re the demographic for this game, and you’ll get a kick from it. There are no nasty surprises in the way the kart racing action is executed, and it’s so overwhelmingly competent it would have been something truly special if it was just a little more interesting. Sadly, the really, really good character mashup games are enjoyable even if you’re not a fan of the properties, and Nickelodeon Kart Racers 2 doesn’t quite get that far.

Nintendo surprise-dropped another Hyrule Warriors: Age of Calamity trailer on us