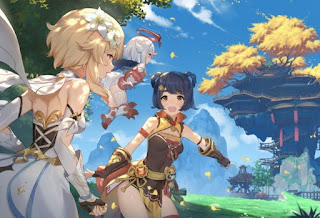 I’m going to say this up-front: these comparisons between The Legend of Zelda: Breath of the Wild and Genshin Impact highlight just how superficial we can be in the way that we talk about games. Structurally, thematically, narratively, in terms of character design and in almost every other way that matters, Genshin Impact is nothing like Breath of the Wild whatsoever. Those comparisons are being made because the environment aesthetic is vaguely similar, and in fairness, it is entirely possible that Breath of the Wild was a source of inspiration in that regard. But to actually compare the two games based on that is like saying Hokusai and Alan Moore both made comics and are therefore comparable.

It’s a legitimate pity that people are trying to pigeonhole Genshin Impact like that, because there is a lot to talk about with regards to this game, all by itself. It’s truly gorgeous, for a start. This is indeed partly because of the way that the massive open-world has been designed to give you views. It has scope. It seems a little empty and lonely when you look out over those vistas, perhaps, but then you start walking around and see flaura and fauna bursting out all around you, and thanks to that colour palette this is a game that invites exploration and promises wonder, right from the outset. This is a game that offers wonder from the grandest scale through to the finest detail.

The only thing that is perhaps even more beautiful in Genshin Impact than the environments across the world is the hips of every woman in it. I’m not even joking about that. Now, Genshin Impact isn’t fanservicey about its approach to characters. It’s a game designed to have wide appeal and the developer knew that bikini bodies and panty flashes aren’t going to get it there (at least, for now). The developer’s art team, however, knows how to draw beautiful and they fully indulged that talent with this bunch of characters. The boys are pretty enough themselves, but Genshin Impact’s women are, with no exaggeration, some of the most stunningly feminine, graceful, beautiful character models I’ve ever seen, without the emphasis on their femininity getting to the point of becoming obscene. 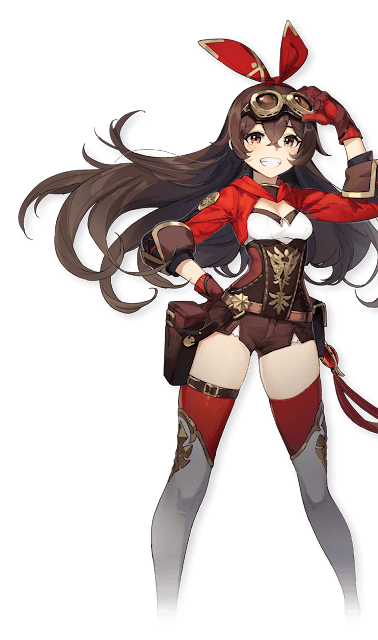 Unfortunately, some of this initial impression, which is really so glowingly positive, falls to the wayside once you move into the adventure proper. The game still plays like a delight – and I’ll get to that soon – but the big issue here is the narrative, which is most certainly compromised by it being a free-to-play game with gacha mechanics. The problem that developers in this particular space face with their games is that every second that players aren’t in a space where they’re able to (and encouraged to) spend money, the developer’s missing out on revenue. What this means is that cut-scenes need to be filed back to the minimum possible. Dungeons need to be brief, as the emergent narrative doesn’t mean as much as the potential to funnel players to the in-game store once back out of the quest. Characters need to be reduced to caricatures in order to deliver their personality and quirks quickly.

In comparison to MMOs (which only need to have players sitting in the game for as long as possible, as often as possible), and standard, conventional, right-out-of-vogue “premium” games (they’re the ones that have the luxury of actually focusing on the story without worrying about the monetisation), gacha games like Genshin Impact and deep, nuanced, heavy-hitting narratives are mutually exclusive experiences. For clarification, I’m not really criticising Genshin Impact here, and the fact I’ve spent something like 20 hours in the game on launch week when I have so many things to do should be taken as proof positive that it has plenty of other merits that more than make up for the narrative. With that being said if I could have taken this exact game and swapped out the gacha for conventional JRPG narrative and pacing, I would have.

The other negative quality that gacha brings into Genshin Impact is a bewildering flood of loot acquired from every short burst of play, as well as the 20-point menu systems, and multiple virtual currency systems layered one on top of the other, with some being completely free and in-game, and others screaming for your wallet. When the world itself is so beautifully realised, having to pick through three million items, grapple with upgrade systems with (often) marginal benefits, and making sure you grab those adventure rank bonuses (note: not character level-up gains), daily rewards, and a dozen other meta systems, does introduce a kind of density of information that may be necessary for the game to make money, but does compromise the suspension of disbelief. Again, if they had just made this an upfront “premium”-priced game… 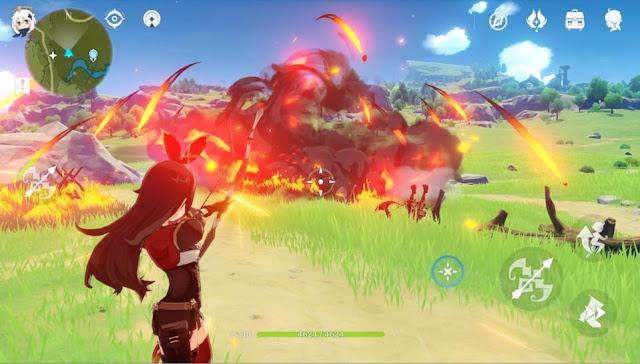 I do love Genshin Impact, though. I bellyache over what it could be and I’m critical because that’s my job here to write game criticism, but I can see myself spending a lot of time playing it over time. Mechanically, it feels incredible. You outfit a range of characters, each with their own special weapons and special abilities, and then go about bopping up a huge range of enemies, with many (most) of them having strengths and weaknesses that force you to cycle through all of those characters and use them all. Dungeons are short and to the point, but offer some nice tactical variety, and even the occasional puzzle. When wandering around the world you’ll sometimes come across enemy camps or clusters of wild things, and defeating them will always give you a treasure chest with some good prizes in it. The fact it plays well and feels good shouldn’t be a surprise in the sense that it’s in the interest of any gacha game to ensure that you are enjoying yourself while playing, and the development team has made sure of that. You get rewarded for your time investment in this thing.

And then, after a good session of questing, it’s a simple trip back to town where some rather nicely-written characters will give you new quests and bits of lore (albeit typically in very few words). It might be a grind when all is said and done, but it’s an enjoyable, and expansive one that knows how to create the perception of variety. Genshin Impact has a nice, genuine, and wholesome sense of humour too, which will be wholly inoffensive and entirely charming to anyone who plays it.

I won’t make this a scored review since it’s a free-to-play game and you can just download it and make up your mind for yourself. Unlike certain other F2P games, this one is by no means an offence to the intelligence, nor a cynical play for player’s money. Would I have preferred Genshin Impact to use a different revenue model? Yes, absolutely. Gacha games mandate a different approach than more conventional games and I don’t necessarily consider it for the better. However, I do believe it’s well-made, it’s generous in terms of what it actually asks of players with its monetisation, and it is an absolute delight to play. Hopefully, this title has a long future ahead of it.

Ghost of a Tale lands on Switch on October 8

On making a game about life in rural Indonesia