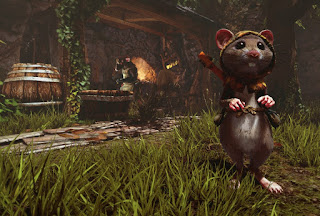 We need more games that make a hero out of a mouse. We felt that Ghost of a Tale did that with style, and was a truly delightful little stealth puzzle game when we played it on PlayStation 4 last year. Now it’s going to get a release on Nintendo Switch.

Set during medieval times, Ghost of a Tale puts you in the role of Tilo, who needs to escape a dank, horrible dungeon and find out what has happened to his true love. Well and truly outgunned by the guards, Tilo needs to be clever in the way he makes his way across the various environments and deals with the many threats that he faces.

It will be very interesting to see how the Switch game holds up – it’s a gorgeous little project on PlayStation 4, with real depth and detail to the art. Hopefully, the developers have weaved some technical magic though, because having this game on the go would be really quite special.