Way back in January, which feels like an entire lifetime ago for many of us, ForwardWorks, Kadokawa Games, and Cave Interactive announced that the three familiar brands would be working on a new mobile game together. So we waited. And waited. And waited some more for any information. Now, we at least know the basics of it. World Witches: United Front will be released for iOS and Android in Japan later this year (and I don’t expect to see it launched anywhere else). Here’s the first trailer:

Granted, other than the announcement, there isn’t a whole lot to know about the title right now. We won’t have to wait for long though, as a Kadokawa live stream on September 11 is set to give us the details. It will begin at 20:00 JST on Kadokawa’s YouTube Channel. Here is the direct link.

Kadokawa Games is one company of many (and many, many more) that are part of Kadokawa Corporation. The corporation deals in anything from anime to real estate, but its safe to assume that World Witches: United Front is coming from Games because its other developer, FromSoftware, is known for extravagantly difficult console games (Dark Souls, Sekiro). ForwardWorks was actually created by PlayStation back in 2016 to bring its brands to mobile phones in Japan. And Cave Interactive is the developer behind many shmups, such as Deathsmiles.

Root Film, the sequel to the much-beloved Root Letter, launched in Japan at the end of July. We’ve pretty much always known that it will be coming to Western territories as well, but now Kadokawa Games (the developer, coincidentally enough based on the above story) and PQube (the publisher) have announced that the game will launch for PlayStation 4 and Nintendo Switch in the first quarter of next year. A limited edition was also announced, so take a gander: 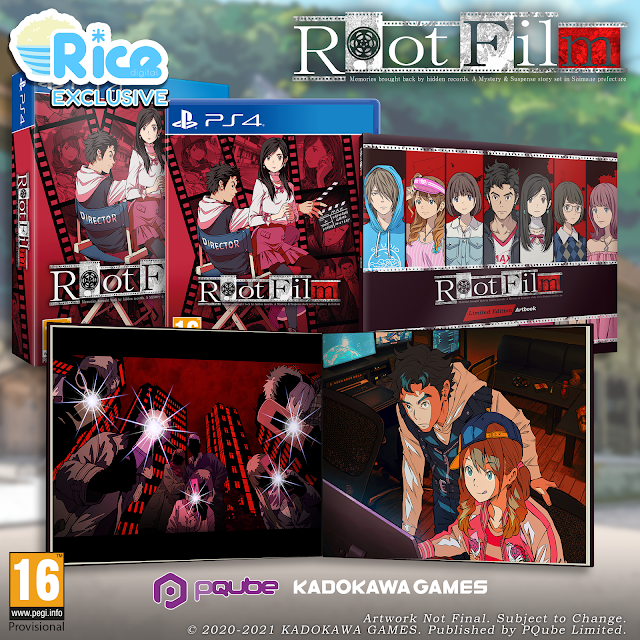 The limited edition is by Rice Digital, and already available for preorder via Funstock; the PlayStation version is available here, and the Nintendo Switch version here. It includes a physical copy of the game, a 100-page art book, and a box to keep it all in. All for the low, low price of $90 Canadian… my wallet weeps at the idea.

Root Film’s narrative surrounds a mysterious cancelled TV series titled Shimane Mystery Drama Project. Rintaro Yagumo has the casting opportunity of a lifetime, but his excitement disappears when a murder interrupts location scouting. Several features are new to the title. There is an Intuition mechanic that lets players gather keywords during conversations, revealing words that are essential to the investigation. After Intuition, there’s Max Mode; once enough keywords are collected, you can confront suspects in a fighting-game-like face-off. Finally, there’s “zapping,” which allows the perspective of two characters to be reveal simultaneously.

Shenmue gets the anime treatment

Literal decades after its original release, the Shenmue franchise is still keeping its fans enthralled. The first and second games first launched in 1999 and 2001. Then there was an extremely long wait until Shenmue III; a Kickstarter for the game launched in 2015, and it was released almost a year ago. Still, the people want more, and the people will get more in the form of Shenmue the Animation. 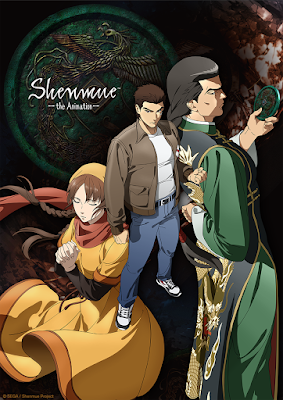 Announced by Crunchyroll a few days ago, the series is already being produced by Telecom Animation Film (Tower of God). There will be 13 episodes, but past that, very little information about the anime’s content itself.

We do, however, know some of the major players. The series will be directed by Chikara Sakurai (One-Punch Man Season 2). One of the executive producers will be Yu Suzuki, the series’ creator and game designer. So, while we only know a few details, they are solid tidbits to start with.

Too Kyo Games’ World’s End Club launched for Apple Arcade on September 4. Published by Izanagi Games, it is set to come to the Nintendo Switch next year. It is written by Kotaro Uchikoshi, the Zero Escape series creator, and has Danganronpa’s Kazutaka Kodaka as creative director. Here is the launch trailer:

At a Tokyo elementary school, the Go-Getters Club is formed of oddball kids from all over the country. Reycho and the others are… different… but can’t necessarily pinpoint how until they are involved in a bus crash and wake up in a theme park under the sea. A clown appears, demanding the children play a fate game (how very Danganronpa). In the blink of an eye, without really knowing what is happening around them, the children are fighting for their lives. Oh, and the children’s extraordinary powers begin to awaken, because who doesn’t love secret powers?

The game features simple controls, and fuses 2D scrolling puzzles with story. Player choices will effect the branching narrative. With 12 unique characters and famous Japanese locations, the story is said to fold in unexpected ways.

RPG Maker MV on Switch: Why I love this “game”