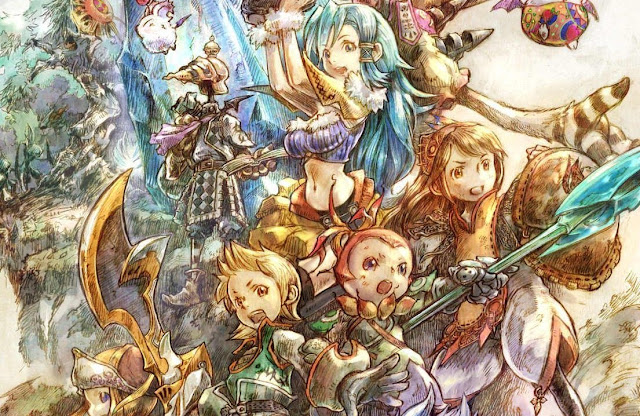 On the grand scale of disappointments in video games, I do think that Final Fantasy Crystal Chronicles: Remastered Edition will rank highly. The original, released way back on the GameCube, was a delightful little game. It was a homage to everything people loved about Final Fantasy, wrapped up in a local multiplayer experience that allowed the Final Fantasy faithful to go out on twee little adventures together. This remaster has removed local multiplayer and can’t even get the online multiplayer to work with any degree of stability. Sure there’s the single-player mode there, but that’s just… a very cruel way to give people Crystal Chronicles back.

A couple of the DDNet team did try to band together to do some questing online. We dutifully went through the clumsy and somewhat confusing process of “friending up” with one another (because Crystal Chronicles doesn’t use the Switch’s friends list and then, for some weird reason, has two separate friend code options just to arbitrarily confuse the process). Then we created a lobby, and watched as we all popped up at the entrance to the dungeon. What bliss we felt, momentarily, as we sent one another little emotes and admired the stylish costuming of our friends. But then we started to play. The furthest we got was a little wander down a road where, after bopping a goblin on his head, the connection crashed and we were all thrown out of the game. After we tried this a couple of times, with diminishing returns each time, we all gave up.

Later in the weekend, I tried to join random player’s games via the public lobby, and it’s just a mess. Most of the time it crashed. At other times ping rates made the exploration and combat unbearable. And even when it did work, more-or-less, getting partnered up with randoms is not the way to go for a game that is fundamentally teamwork-based. Even when it worked, at every point I was left thinking that I was getting an inferior experience to what I remember on the GameCube. There’s a quality to local multiplayer and having people in the room that you can directly talk to that is lacking from online play. Online play is great, for competitive games or for simply accessing an entire globe’s worth of players. But it’s not local multiplayer, and its that absence from Crystal Chronicles that is akin to ripping the spirit and soul out of the game. 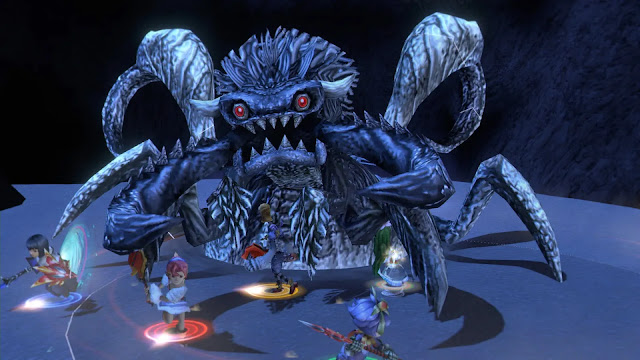 After giving up on multiplayer – short of some major patches and putting local play back into the game, I’m done with that – I decided to re-live my Crystal Chronicles experience solo. On the one hand, the game has charm going for it in spades. You come across iconic Final Fantasy monsters instantly, you’ve got a cute little moogle that follows you around as support (and you can even spray-paint him! Blue moogle!) and the overall art direction is gorgeous. Crystal Chronicles was always a game that relied on aesthetics over technical brilliance, and the good news here is that because aesthetics are timeless and relatively easy to modernise this game looks exactly as good as you remember it. Sure, the world looks a bit blocky now, but it comes across as blocky with intent, and consequently, every environment and location is both pleasant on the eyes and filled with personality.

Unfortunately, Crystal Chronicles is a clunky game, and what it gets away with in multiplayer becomes a real issue in single player. All actions are menu-driven, for example, so if you want to play defensively and dodge out of the way of the enemy, you’re going to need to actively cycle to the defense command before pressing the buttons. It’s impossible to transition seamlessly between attack and defence which, again, isn’t really a problem in multiplayer. If your character is hurt or designated as the one to attract the enemy’s attention, then focus entirely on dodging while your allies use magic and physical attacks to take control of the battlefield. But when you’ve got to do it all by yourself, it’s very laboured.

The levelling system is also an issue in the context of a single-player game. When you defeat a boss, you get presented with a little ring with ten or so options. These options include +1 strength, +1 magic, and so on. By selecting one of these you power your character up, and it’s really the only time you have any control over levelling and character development. When playing with friends this system is still a delight as, firstly, it prevents the game from getting bogged down in statistic min-maxing, and secondly, there’s still plenty of lighthearted decision making involved in building up a robust, rounded party. Taken as a single-player levelling system, however, it’s neither adequate nor necessarily enough to give you a sense that your character is even developing. 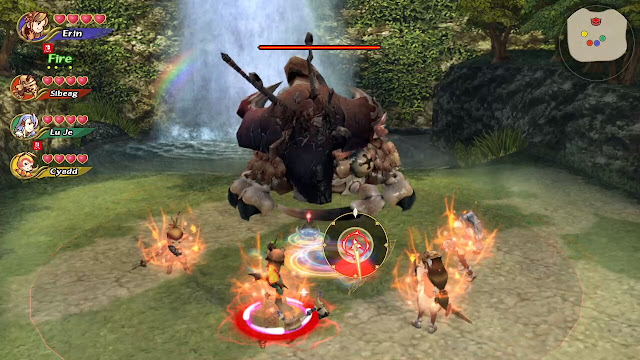 There’s also not much explicit narrative in Crystal Chronicles, because the developers were always counting on the emergent stories that came from playing with friends. Stories built from the way that generations could bond over a game that was none-too-complex for the elderly or the young. A joyful playfulness in the way that intrepid explorers make their way across a vast fantasy landscape as part of a caravan to do their home town a very important social good. It’s those moments where a friend rescues another friend at the last moment from the snapping jaws of a boss that Crystal Chronicles finds its memorable narrative nature, but as a single-player game, it’s almost eerily lonely. That would be fine if the game was a Dark Souls-like homage to The Pilgrim’s Progress narrative tradition, but Crystal Chronicles isn’t making a point of the journey so much as making a mechanic of it. It’s more akin to a Monster Hunter in the way it backgrounds the narrative… though Crystal Chronicles lacks the fascinating nature of those gigantic beasts and does not come off well in that comparison.

So, what’s left? What reason is there to purchase Final Fantasy Crystal Chronicles: Remastered Edition? That’s really the problem here. There isn’t one. This isn’t Trials of Mana with its breathtaking scope, characters, and narrative reborn for a new generation. This isn’t even a port of a beloved classic like Star Ocean or Romancing SaGa, because unlike those faithful ports, Crystal Chronicles Remastered doesn’t preserve the reason people loved the original. There’s something of a hit of nostalgia in playing through the single-player game… but it’s the nostalgia of how much you loved playing that original game, with friends, and the realisation that you can’t do it as well as you’d like to, in classic local multiplayer action, bites.