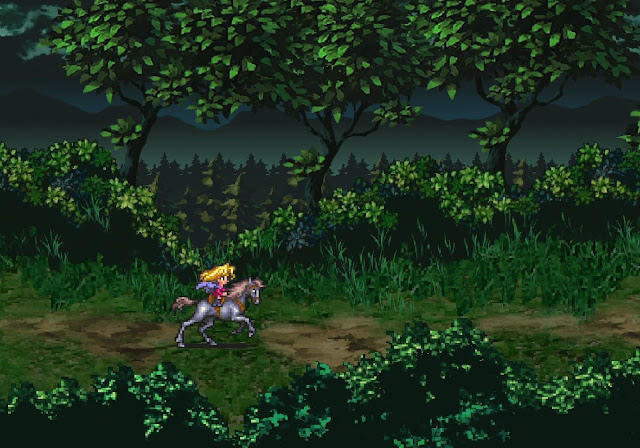 The SaGa series has always been like Square Enix’s forgotten child. Between Final Fantasy, Dragon Quest, Mana and even the likes of Star Ocean, there hasn’t been the room for the more esoteric imagery and storytelling of SaGa to gain much traction, even though there are now a whopping thirteen titles in the series. Case-in-point, this here version of Romancing SaGa 3 is the first time that we’ve seen it officially in English. Thank goodness that the localisation has finally happened though, because this is one exquisitely good retro trip.

Related reading: Our review of Romancing SaGa 2, which was released on Nintendo Switch, PlayStation Vita, etc… much like this one

The most noteworthy thing about Romancing SaGa 3 is just how many playable characters there are. At the start of the game you’ll pick your “main” from a roster of eight, and each of these characters sets you on a different path through the narrative. Some of them have significantly different starts, such as one particular character whose adventure starts with a strategy-like section. From there, though, there are something like 23 other characters that you can recruit into your party, each with their own backgrounds and personalities. This is an older game, and those backgrounds are introduced in a fairly brief manner, but right from the outset the sensation is that SaGa 3 is both open and non-linear in its storytelling. You’ll certainly want to play this a couple of times through just to see how the different blends of parties and character choices can impact on events. It’s surprisingly nuanced at times.

The counter-point to this is that it can feel at times like Romancing SaGa 3 is a little aimless, or that your next goal and important destination are not always as clear as they should be. We live in an era where mini-maps show important locations and characters to speak to with big flashing icons, so the idea of wandering around a little lost and trying to work out what to do next is quaint. When you are struggling to work out what to do next, finding the right NPCs to talk to that will point you in a direction can be a challenge too, and there were points where I needed to visit a few different areas just to cross them off as plot-important locations. All of this being said there are far worse offenders in this regard among the retro JRPG archives, and when you do figure out your next destination, events tend to roll on fast, so it’s rare that SaGa 3 feels like it has become “bogged down.” 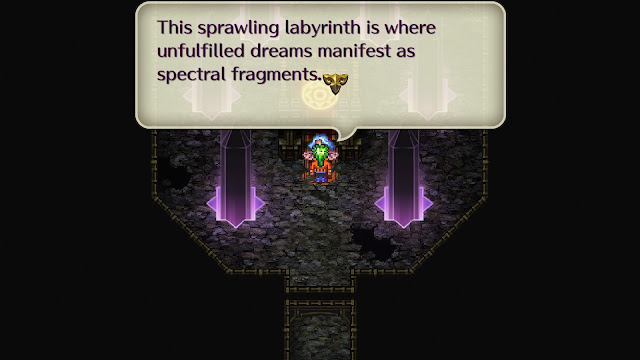 I suspect that players will also find the combat system a little esoteric. You can have up to five characters in active duty at any time (and six in the party in total), and they don’t acquire skills or level up in the standard manner for a JRPG. Instead, they earn new skills or get improvements to health or SP (skill points) based on what they do in combat. We’ve seen this in other RPGs along the years – Final Fantasy II right through to Skyrim – but the actual systems with which SaGa 3 runs are quite obscure. You never quite know when a character’s going to suddenly learn a skill, or what set of actions will improve health. In the end it doesn’t matter too much, because combat is so frequent in SaGa 3 that your characters will naturally improve enough across all areas to keep pace with the difficulty curve. It’s not something that you necessarily need to plan, but players that like customisation and controlling their character’s destiny will find SaGa 3 to be impenetrable at times.

SaGa 3 is less punitive than its predecessor, thankfully. Each character has a “LP” rating (short for “Life Points”). Each time a character is reduced to 0 health in battle, they lose an LP, and if it reaches 0, they’re removed from the party. Thankfully, however, it’s possible to track down and re-recruit them (with the exception of the main character, whose death results in a game over). More importantly, a rest at an inn restores all LP. With dungeons being relatively brief experiences in comparison to many other examples of the genre, and characters getting all their health back after each battle, surviving SaGa 3 isn’t an onerous challenge, as long as you’re diligent in fighting enemies along the way. They appear on the map and can be avoided if you’d like, but generally speaking doing that is a bad idea.

The ultimate goal of Romancing SaGa 3 is to defeat four devils, each one representing a different element. That’s hardly an uncommon motif for the JRPG genre, but Romancing SaGa does do it better than most, and is actually heavily loaded in imagery and motifs that give these themes depth beyond the surface story. Without exaggeration this is one of the most distinctive and beautiful examples of sprite work that Square Enix – the masters of the sprite – have achieved. Backgrounds are lush and vivid, and each new location is a distinctive and interesting place to explore. Enemy designs make every battle with a new one a delight. Each of the characters in your party relies on having a different look to carry their personality in the absence of in-depth narrative plotting… and each of them really does. Square Enix has butchered more than its fair share of remakes of old games, but Romancing SaGa 3 is not one of those. 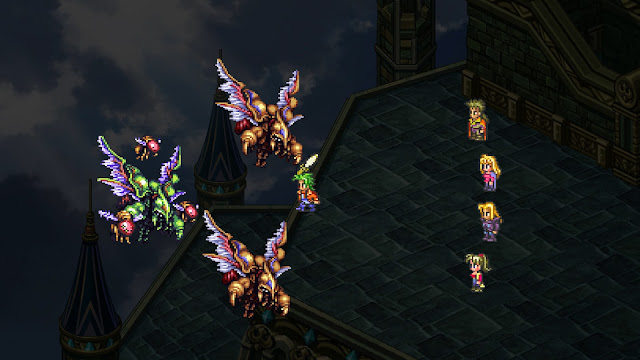 The game has a habit of doing just enough to subvert expectations as you play, too. Within the first hour or so of play I found myself face-to-face with a vampire count… only to discover that he was really an ally, half the women in the town he rules over actively want to become part of his harem, and as long as you don’t go exploring the darker reaches of the castle, it’s actually a perfectly safe place to rest for the night. In every way the setting is creepy. The fireplace fire is green. The soundtrack is of ghosts through the halls. But the vampire himself is perfectly accommodating. Then there’s the scene with the professor. You’re told to go and seek out the professor to get access to a certain item. This professor is “eccentric”, you’re told, and lives out in the woods. Turns out that the professor is a woman, and only “eccentric” because she’s good, and she knows it. Actually she’s quite helpful and does indeed give you what you need to push on with your quest. These moments of subversion aren’t overly subtle – this is an old game, remember, and back then writers had minimal words to use for subtleties – but the effect is sound. Throughout my play through of SaGa 3 I found that it was surprising and those surprises were handled deftly.

There wasn’t a moment of Romancing SaGa 3 that I did not love. Within the context of it being a SNES JRPG it deserves to stand with the likes of Final Fantasy VI, Secret of Mana, and Chrono Trigger as a giant of the genre, and a pinnacle of sprite-based JRPG art. Even compared to those three, this one does some things that are truly striking and visionary. Unfortunately the game seems to be doubly cursed to forever rest in obscurity. The original was never released in English, and this re-release has come right at the end of a brutally draining season that has seen no fewer than ten JRPGs released over the last month. It is no surprise that even among JRPG fans, the response to this release has so far been muted. Don’t overlook this one, though, because it deserves to be noticed.