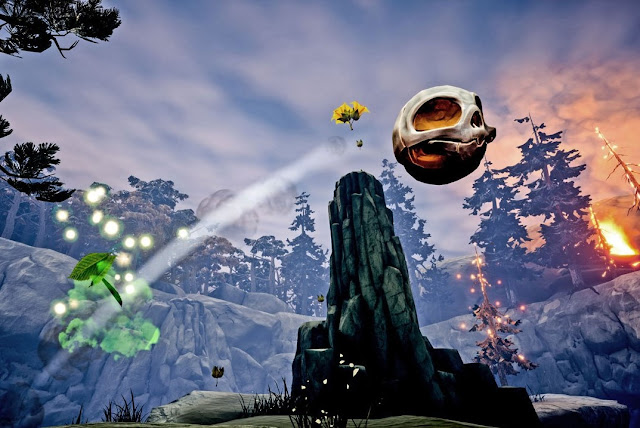 Skully is a frustrating experience, which is a shame because I normally love marble games. I love it when 3D platformers offer a sense of speed, and to be fair Skully’s screenshots do show the types of expansive and vertical environments that would work well in its genre. Unfortunately, the controls and level design don’t fully live up to its promise, and what fun there is to be had in this game is often curbed by difficulty spikes, tedious platforming and superfluous side-mechanics. While the core elements of the package are serviceable, and I admit the gameplay does dredge up fonder memories of classic 3D platformers, there are enough design flaws to hold this back from greatness.

The controls of Skully are easy to pick up and understand – players take control of a magically animated skull made with a special clay, which can roll about and explore the environment. The player is guided by a disembodied voice named Terry, who has some vague plans about saving the natural world using Skully’s powers. The world of the game itself is twisted and fractured, taking the player through a variety of beachside, forested and volcanic environments, around perilous twists and turns and across the path of some elemental monsters.

The player has a variety of powers gained by bathing in the magical clay and developing a body to surround the skull. There are three main bodies to use – one which can hit things and break barriers, one which can double jump, and one which can move platforms from a distance. I found it interesting how powerups effectively functioned like the Fire Flower from the Mario series; once the player picks one up from a checkpoint they can use it at will, and it functions as a “health point”. Getting hit as one of the bodies will knock the marble version of Skully out, at which point you’ll need to either retreat to your checkpoint or try to press forward. 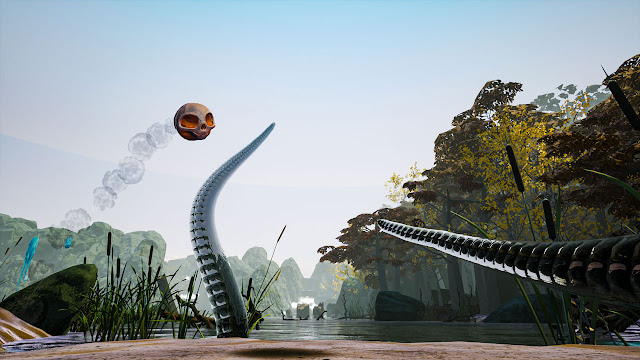 While the game’s earlier levels are largely platforming affairs, the puzzle elements become more and more pronounced as the player gets access to the different bodies. Regardless, the game’s levels remain fairly linear; the promotional material makes the worlds look wide and expansive, but each one is a straight path across various obstacles with the challenge to get from Point A to Point B. Slight detours exist, which diverge from the main path and offer some collectible flowers, but it’s not like the player can advance the game’s story by doing anything other than approaching platforming challenges and puzzles in exactly the way the developer intended. The flowers unlock concept art and other goodies once collected in bulk, but collecting them is tedious, they often force the player to take riskier paths and dying at any point resets all the flowers you collected since you last touched a checkpoint – so quickly I just learned to ignore them.

The game’s platforming and puzzle challenges feel like they could have been refined with some additional playtesting – most of them are either too difficult or, in the case of puzzles, a little esoteric owing to details that wouldn’t be obvious without liberal rotation of the game’s camera. It’s the kind of problem which the game’s developers wouldn’t encounter because they’d be used to the various level-design elements and know their solution, but a fresh player will be stopped right in their tracks by the unexpected difficulty spikes.

One particular plot point is that Skully is weak to water because he’s made of magical clay; which is frustrating because there’s water everywhere in this game. Even in the first zone, there are precarious platforming sections which require the player to hop over rocks and planks suspended over the ocean. The developers are also rather stingy with checkpoints; one thing they do often is make the player go through a harrowing platforming challenge which requires multiple resets, and then just not put a checkpoint after it. There are many moments in my playthrough that I felt genuine stress because of this – but, based on the game’s tone, I would’ve thought this was unintentional. 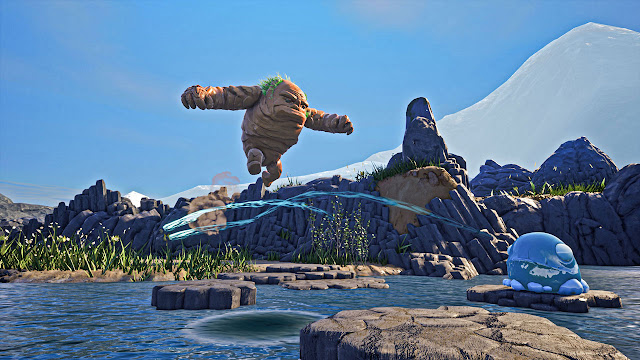 It’s hard to describe the style of Skully since it’s so very generic; I had a hard time remembering each of the levels beyond “the lava one” or “the one with the tentacles”, since it’s all standard 3D platformer fare. Enemies are likewise devoid of personality, appearing as blobs with faces which have annoying attacks but no real reason for existing or impeding your quest. The game’s narrative doesn’t help either; it’s very vague in many places and it’s written and delivered with the flavour of three teenagers who bicker more than they achieve anything. They’re also disembodied voices too, so it’s even harder to relate to what they’re going through. I would often completely forget what the plot point of each zone was, because of how much stress I was going through with the platforming, only to be reminded when Terry started sarcastically quipping to me again.

The world is sufficiently large and well designed from an aesthetic perspective though, and I did enjoy travelling through the different environments even if it was more of a cosmetic change than a gameplay one. I recognise that the Switch isn’t likely to be the most visually attractive version of this game; there are plenty of water and texture effects which don’t work well in handheld mode, although everything is still clear enough for gameplay to flow smoothly, and I didn’t notice any issues with frame rate or battery drain.

I really wanted to like Skully because it falls neatly into a genre I have fond memories for – I’ve played more Marble Blast on old iMacs than I’d like to admit – but Skully very rarely succeeds at being the frenetic action platformer that it wants to be. Lacklustre level design and an inconsistent difficulty curve, matched with a meandering and confusing story, make this a hard sell for just about anyone. It’ll take a lot of patience to enjoy this one, even if you are a seasoned fan of 3D platformers.

For the love of Tohka, Idea Factory, announce a localisation of Date A Live: Ren Dystopia already