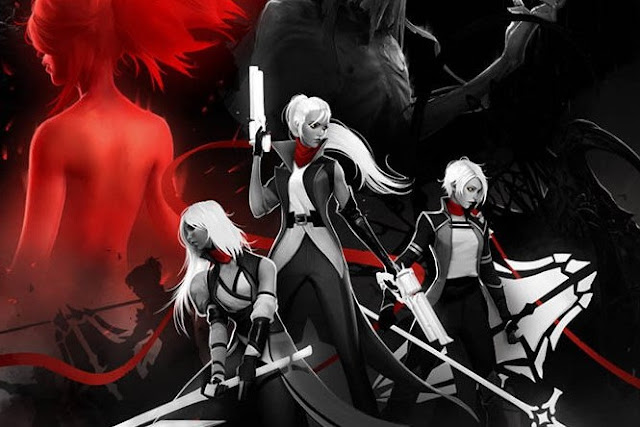 There is a lot to admire about Othercide. It boasts a strong concept, an incredible aesthetic, and some excellent moment-to-moment gameplay. Unfortunately, it’s also yet another victim of the industry’s obsession with giving players content over having the confidence to allow what should be a fairly short game simply be short. I really, really like Othercide. I just wish I could have been done with it much sooner.

Othercide is a roguelike in a similar vein to what Darkest Dungeon pioneered within the genre. The game is broken up into “chapters” of escalating challenge, and within those chapters you’ll need to play through a series of randomised levels. In Darkest Dungeon, the experience played out as 2D-style dungeon crawling. Othercide is different in that it’s Fire Emblem or Final Fantasy Tactics-like tactics action instead (who knows why other critics are comparing this game to XCOM, since the tactical action in Othercide doesn’t feature things like cover and you won’t be watching the “chance to hit” percentage anywhere near as closely). What is common to Othercide and Darkest Dungeon, though, is that you’ll fail over, and over, and over again, and have to start the chapter over fresh, albeit with some incremental carry-over from one “run” to the next that will eventually result in the chapter being easy enough to roll through.

The problem is that the randomised levels and combat becomes far too samey for a game that is so compelling, different, and eye-opening in every other way. Having to grind your way through the same enemies, with the same mission structure, using the same three (eventually four) character types, and on so few maps is exhausting, and actually unfair to the raw creative energy of the rest of the game. Darkest Dungeon used the repetition effectively to drive home its narratives and themes. It was a game about stress, depression, drudgery, and the gameplay loop supported that. Othercide derives no such narrative or thematic value from having players replay levels, other than by doing so it gave the developer carte blanche freedom “to be difficult.” Difficult Othercide certainly is, but I’m not even sure that suits the game’s themes or narrative. Instead, it comes across as a very arbitrary and even cynical pathway to get that “hours played” counter up. 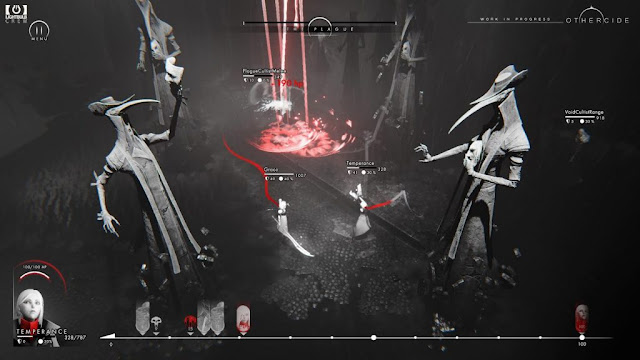 See, what Othercide actually is, is a darkly beautiful, gothic tale of female solidarity and sacrifice, and none of that required it to be difficult or repetitive. The central figure in the game is the Mother – a being of God-like power that can birth daughters into the world to fight against (male) beings representing one reprehensibly vile thing or another. The daughters work best in groups of three or four – individually they’re weak, but as a group powerful and complementary. The male villains meanwhile are terrifyingly powerful, but they also work individually and even when your team is swamped by them, the enemy AI is less tactical than it is burgeoning. Is this a less-than-subtle metaphor for the woman’s experience? Perhaps (I’d say it’s overt enough to be clear developer intent). But it’s also poignant, powerfully told, and as rich in the same opaque type of lore as a Dark Souls or (more thematically appropriately) Bloodborne. It’s the kind of story that you’ll find yourself pouring over each obtuse snippit to understand the overall picture better, and you’ll love doing so because everything else about the game is fascinating.

These daughters not only work well together on the battlefield, but they sacrifice themselves for the greater good between battles. The only way to heal one daughter is to sacrifice a daughter of an equal level or higher, and this requires some hard decisions to make. It can take hours of carefully levelling up one daughter over repeated “runs” through a chapter, only to have to decide to sacrifice her at the 11th hour because she’s the only one of a high enough level to heal another carefully-levelled daughter on the brink of death. There are benefits to doing so, as the sacrificed daughter will confer bonus statistics and abilities on the one left behind, but as resource management systems go, Othercide has one that is brutal in what it asks players to contemplate doing.

You do have the means to bring a certain number of daughters back from the dead, courtesy of a “coin” system. As a currency, these coins don’t do anything else but revive daughters, and you have very, very few of them, but they are a boon granted on each “run” attempt, allowing you to start that “run” with some high-levelled daughters already in the party. That’s how the loop eventually becomes easier, and why it feels like the developers intended on the game being a grind rather than something genuinely difficult. With something like Dark Souls or Bloodborne you can never simply level and repeat your way to success. You can make key battles slightly easier, but make the wrong move and it’s still curtains (and quickly). Othercide grants surety with enough repeat plays and patience. 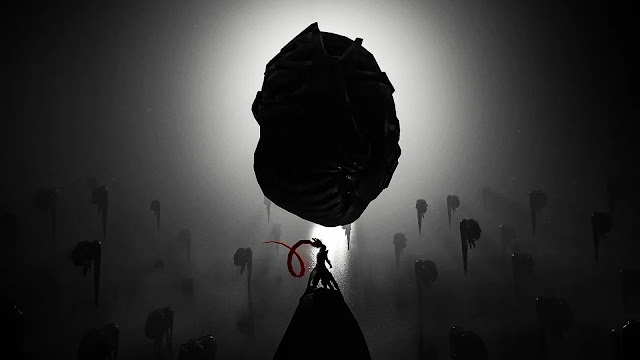 On the field, Othercide has one of the best turn-based tactics combat systems I’ve ever seen. Time management is the critical thing to watch here, with a big timeline at the bottom of the screen showing where your characters and the enemies are all due to take their turns. On a daughter’s turn, she has 100AP to play with, with movement and combat skills each using up a certain number of points. For the first 50AP, she’s effectively free to move and use abilities without penalty. For the 51st through 100th point, however, things are different. Once she starts using those points, she enters “burst” mode, which has the effect of pushing her next turn far, far back down the timeline. It’s a Hail Mary move, basically. That extra movement or attack might be enough to take down an additional enemy, but it all but guarantees that every other enemy on the map will get to go before the daughter gets her next turn. Remembering that you need to preserve your daughter’s health as much as possible (because there’s no healing without sacrifice), the risk that even one other enemy will get a swing at a daughter recovering from burst will have you weighing up every single move that you make.

The other thing I love about the tactical action is that some of the (most useful) skills consume hit points rather than AP. It’s only a tiny amount so as to not dissuade players from ever using them, and those skills are generally contextual (i.e. they’ll help out another daughter as well), which feeds in nicely with the theme of sacrifice and kinship, because once again, there’s no healing between levels. What it does mean though is that if you’re going to use a skill that consumes hit points, you’re going to going to need to be sure that there’s strategic value in doing so.

It’s also hard not to be impressed with Othercide’s visual aesthetic. The selective use of crimson against the otherwise black-and-white, maximum-contrast tones lends the game an elegant gothic atmosphere, while the dance-like graceful movement of the daughters contrasts with the skulking brutality of those they fight against in a way that shows that the game has an eye for detail well beyond the humble level of technical detail that you might assume from the static screenshots. Meanwhile, the Nightwish/Lacuna Coil-style metal soundtrack combines with the visuals to give Othercide an eclectic, deeply immersive blend of aggression, melancholia, gothic romance (in the vein of Wuthering Heights) and power fantasy.

The only technical issue that I have with Othercide is in terms of accessibility. Unless you’ve got a fair-sized TV, Othercide’s text is headache-inducingly small and unpleasant to read. Amusingly the developers seem to have recognised this in that there’s the option to turn on “large subtitles” for the dialogue and narrative exposition, but the interface fonts will remain difficult for anyone that would need the large subtitles option. I appreciate that most people these days have decent-sized TVs (and there are certainly worse offenders than Othercide out there in terms of failing to account for TV sizes) but it’s bad design to simply assume that players have a minimum screen size and/or resolution. At least offer one alternative “small display” interface option in the settings. I get the sense that this is going to become an exponentially-big issue once the PlayStation 5 and Xbox Series X hits and developers start assuming that everyone has large-format 4K televisions.

That aside, the real issue that Othercide isn’t technical, it’s thematic: this is a game that is at odds with itself. Nothing about it suggests that it needed to be difficult like a Darkest Dungeon or Bloodborne… indeed its narrative and themes would have better lent themselves to a much more condensed, intense, and high-impact experience. But that would have also made the game shorter, and so once again we have a casualty of developer obsession to preference content over cohesion. Othercide had all the elements it needed to become something truly powerful. Sadly, it tries to stretch that material too far and forces players into too much repetition, eventually diluting the game’s impact and leaving it as something which, as vivid and entertaining as it is, is also just a game.