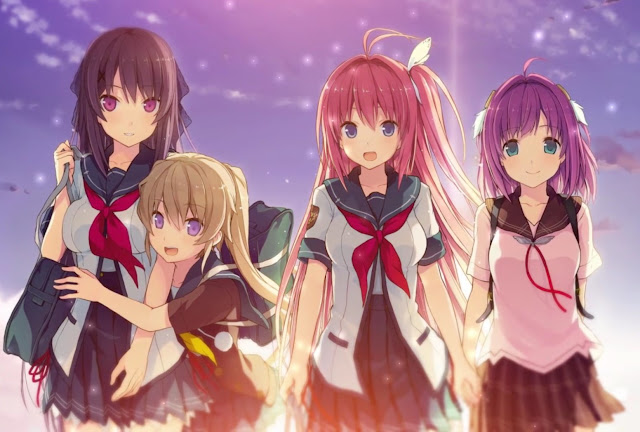 “Why are all the girls wearing such short skirts when they’re using technology that lets them fly through the air, with all the disadvantages that would bring to wearing a skirt?” This was, quite genuinely, my first thought as I settled into Aokana. It’s not like these girls lack a sense of modesty – an early scene where you accidentally happen to see your neighbour’s daughter stripped down to her underwear makes that clear – she’s quite furious and embarrassed that you saw her in her panties. It just seems like these girls never seem to actually think of these things. They don’t close curtains when undressing, even though the neighbour’s window is right there. They don’t think to wear jeans or shorts if they’re planning to fly about the place.

Of course, I had that thought before I discovered that on PC Aokana is very much an adult VN, and then the heavy and contrived application of the male gaze made sense. The Switch version of this romance/sports-themed visual novel lacks the (very) explicit sex scenes of that game (obviously – Nintendo’s not about to become that much of a free-for-all), but it’s still plenty fanservicey and, if anything, without the explicit titillation the rest of the narrative is able to come to the foreground. That’s not such a bad thing, because this is one of those adult VNs with an exceptional story to share.

The protagonist of Aokana is Masaya Hinata. He’s a dude that’s going to end up with a harem soon enough. He’s also a bit messed up, because though he lives on an island where the default form of travel is anti-grav shoes (yes, there’s a bit of pulp sci-fi in there), but due to some trauma as a youngster, he really doesn’t enjoy flight. But then a new (and very pretty girl) comes to the island, decides she wants to take up Flying Circus, a sport that takes place up in the sky using these shoes, and somehow our protagonist gets roped into being the coach. A bunch of other girls also join this club and they set about training to become the best team they can… and along the way, the dude can find true love with one of these girls. 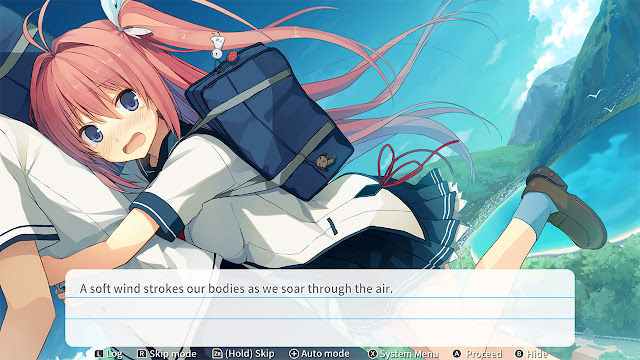 Aokana doesn’t break boundaries in terms of its concept – whether you gauge it across visual novel, anime or sports rom-com standards it’s very, very standard fare. But that’s okay. Not every story needs innovation, and Aokana does have more than a few other qualities going for it that made it a story that I found quite engrossing. At first, I wasn’t sure how I’d get along with it, as those sci-fi elements did seem so very silly, but once I had a chance to start to get to know the characters I realised that this is a wonderfully sentimental and charming little game.

Also, it’s immediately obvious is that this game is gorgeous. Though it lacks the depth of animation and variety in character portraits and poses as some other top-flight VNs, the character sprites are distinctive and incredibly attractive (even if the adult VN heritage means that most of them are just a little too oppai for my tastes), and the backgrounds benefit from a rare level of detail. For example, most school classroom backgrounds in most visual novels are depicted as empty rows of chairs, but in Aokana the environments give a great sense of energy thanks to a half dozen (if not more) people depicted as going about their day in the background. The key art CGs is also something special – you might not get the sex scenes (which is a bit of a pity since with a Google search I can confirm that they’re supremely well-drawn), but from the way the game captures the soaring experience of the sporting events, through to the richly detailed fan-service, there’s still plenty of stunning art to enjoy.

Aokana also has a pretty special soundtrack, and coupled with the game’s key motif of soaring about in the skies, I was actually reminded of another visual novel that likewise makes a big deal of the skies: If My Heart Had Wings. Both these games have an airy, “wispy” aesthetic and tone, and because of that they actively put the player’s mind at ease as they play. Even through the more dramatic moments and coming-of-age arc, Aokana carries a sense of open freeness that is uplifting and comforting. 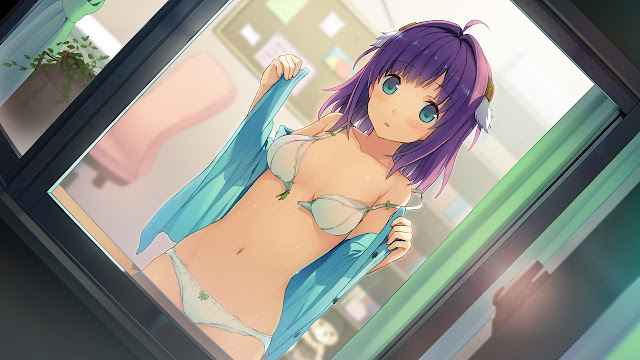 Finally, Aokana is written particularly well. Again, it’s not breaking with any particular traditions or subverting expectations, but the character of the writing is highly refined and the tropes are comfortably familiar rather than hackneyed. Whether it’s the bubbly airheaded Asuka Kurashina, the cat-addicted Misaki Tobisawa, the twintailed (it’s a personality trope as much as it is a hairdo) Mashiro Arisaka or the “sexy and yet all-seeing teacher,” Aoi Kagami, each of the major characters in Aokana is overwhelmingly sweet in their own way and, ultimately well-meaning. In fact, so much of this game comes across as so sweet (deliberately so) that it would be too much were it not for the rom-com context, which pulls in a “wink and nod” context to the proceedings.

The kind of narrative that Aokana presents always needs some kind of digression to break up the character interactions, else the unendingly romantic rhythms can become tiring. Aokana finds that needed change of pace with the sporting narrative thread. Aokana loves getting into very long-winded descriptions of this Flying Circus game that all the characters are so invested in, complete with lengthy descriptions of the rules, the different play styles, and the games themselves. It’s a curious choice for a visual novel – not that the written word can’t convey the drama of sport incredibly well, it’s just that visual novels usually aim for more “static” drama – but it does work really well. At first, the way Flying Circus is described will make you think that it’s just a game of tag in the sky, but somehow the writers have managed to eke a believable – and believably exciting – sport out of it.

Aokana is an excellent example of a romance visual novel. It’s lightly entertaining, often whimsically so, but has a compelling and rich cast of characters that you’re left rooting for. The art is impeccably beautiful, and while you could bemoan the removal of the explicit sex scenes for the console release, I think what’s left behind takes on a different texture. It’s a sweet and playful little thing on the Nintendo Switch, with some fun and teasing fanservice to go with the energy, but liberated of the need to make the sex the big payoff to playing the game, Aokana’s narrative is more than enough to carry the experience. I really love this game and find it very much inspiring, so you can expect to see Dee Dee and the other girls strapping on anti-grav boots for the next DDNet visual novel, I guess!

The most memorable games of the generation: Part 4