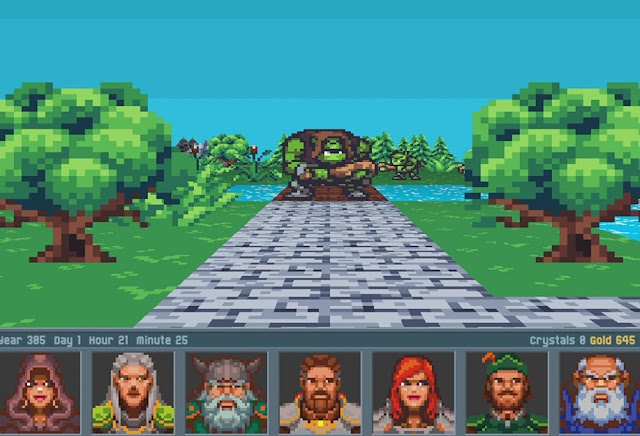 Nostalgia is a tricky beast to deal with. Take a beloved game (or genre) and try and modernise it too far and it stops being a nostalgic experience at all, and as a retro-inspired thing falls flat. On the other hand, if things are kept too traditional it doesn’t take long for the rose-tinted glasses to come off and even the diehard fans have to acknowledge that some “old game” quirks are best left in the past. Legends of Amberland wants to be a very traditional, nostalgic grid-based RPG, in the vein of the old SSI Dungeons & Dragons series. Looking at it for its purity in mission, it has achieved that. Sadly, the game also pushes the retro a little hard, and the rose-tinted glasses will most certainly come off when playing this.

The game’s big problem is navigating around its world. It does feature a map, which is good (a lot of these old ‘crawlers don’t even do that), but questing and pathfinding is a real pain. You’ll scurry around a castle or town, find an important person, and on talking to them they’ll tell you they need you to go and find some region to find some object, or talk to someone there. And then… you’re left to figure that out exactly where that region and person and object are. A compendium lists the quests that are active, but the descriptions on what you need to do to complete those quests is a little vague, particularly in describing where the regions are. Right at the start you’re told to go to the “enchanted forest”, for example, and yet on pulling up the map there was no indication of which clump of trees I could see might be my target. I felt like an idiot later on when I more carefully poured through the dialogue to find that the directions were clear enough, and I do suspect this is deliberate as an effort to encourage players to make their own notes as they play alone. If so, mission achieved and I did play Legends of Amberland with a notebook handy, but I do happen to believe that quest markers and easily definable regions on the map were positive additions to the modern RPG, and I don’t think this game would have been any less retro themed without it.

One issue I had was that I really struggled to pay attention to every word of dialogue, which I really needed to to have a proper understanding of what I needed to do in each quest. The effort at world building in Legends of Amberland isn’t great. In fairness to the developers it’s not easy to get players to become immediately engrossed in a massive world that will take around 40 hours to fully explore (not counting the time you’ll spend lost). With no way of instantly drawing players in the creatives need to hope that players will grow into the world quickly, and that’s hard. The old SSI games had the fact that they were all Dungeons & Dragons titles and therefore inherently interesting. Wizardry and Might & Magic relied on the brevity of the narrative bits to prevent players feeling lore-dumped. However, other narrative-heavy RPGs over time have succeed in capturing player’s attention from a blank slate – think Elder Scrolls Arena, or even the more recent The Quest. Sadly, Legends of Amberland isn’t in the same league. Part of the issue is the lack of detail and animation outside of combat enemies. NPCs, quest-givers and storytelling elements are all represented by tiny and indistinct portraits, and yet they hit you with large paragraphs of text, all using a font that screams “try-hard retro,” and isn’t particularly readable (especially in the Switch’s handheld mode). I do appreciate the retro authenticity on one level, but on the other I found this game rather unpalatable to explore. 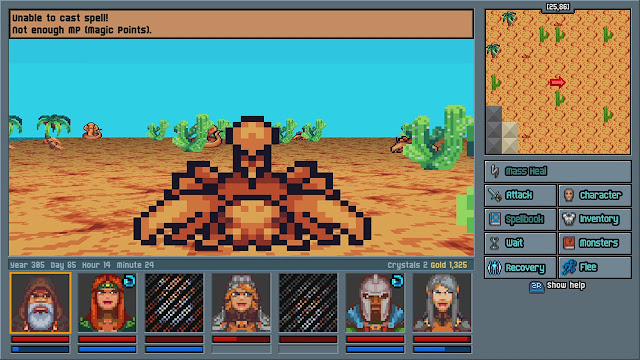 Combat does fare better, because the enemies, simple as they are in animation and design, do fill the screen and the variety among them is impressive. I particularly enjoyed the moments where I got to drop out of the large (and generally open) world to explore caverns and dungeons. Those moments were vintage ‘crawler gold. Unfortunately combat is hampered by enemies tending to have a lot of health, and the game throwing some astoundingly stupid difficulty spikes out of nowhere. You can be cruising through a dungeon and dealing with all the enemies effortlessly, leading you to think that you’re in the right place for your current party’s experience levels. Unfortunately you’ll then run into some ridiculously powerful boss monster that will wipe the floor with your team. Even when you’re able to defeat the more powerful enemies, they do tend to have a lot of health and the combat process is far too much like a slow war of attrition.

Finally, as far as issues go, this game is not optimised well for the Nintendo Switch at all. Every menu item needs to be pulled up by using a combination of a shoulder button and a face button, and it’s such a clumsy system that you’re going to need to constantly refer back to the control help menu for the longest time. There are touch screen options available, but the interface is tiny, and the hybrid touch/button combination, which is the best way to play, is clunky. Of course, playing the game docked removes the option for touch screen controls. None of this makes the game unplayable, since it’s turn based, and so fast precision isn’t important, but clunky interfaces are a real chore to deal with nonetheless.

With all of that said, there is merit to Legends of Amberland. The world is huge, for a start, and it’s filled with all kinds of hidden secrets to hunt out. From the little caves crawling with monsters (but the promise of plenty of loot), through to the huts of recluse hermits, and the occasional town or other oasis of civilization, Legends of Amberland is a game that wants players to simply explore it. A lot of this stuff is either completely optional, too, giving the game that sense of freedom that people who enjoy western RPGs love. Party construction is a lot of fun too, as you’ve got plenty of slots to fill with heroes, and a mountain of different options to mix and match to arrive at your team. 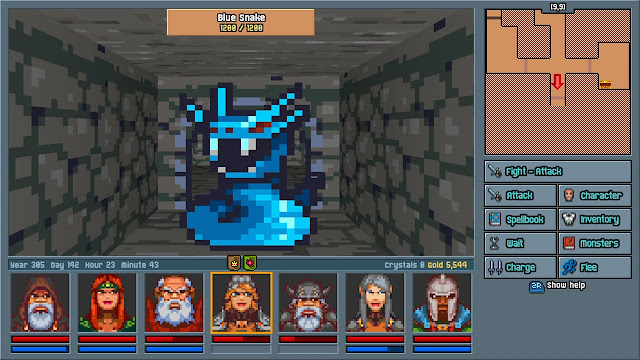 Legends of Amberland succeeds in capturing the appeal of those old Gold Box-era RPGs from SSI and their ilk. This was my childhood growing up and as such much of what the game offered fit like a particularly comfortable and well-worn glove. Unfortunately, the developer also decided that for whatever reason the game would have every issue from the RPGs of yesteryear as well, and it’s an odd thing for a developer to do – capture the same aesthetics and rhythms of retro games, fine, but why go to all the effort to also emulate all the flaws that the genre has moved on from for good reason?

Doraemon Story of Seasons on PS4 has its western release date

The Friday Ten: The ten best narratives to load onto your Nintendo Switch