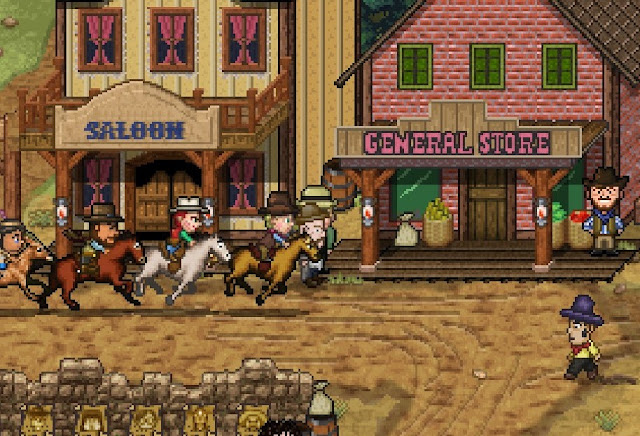 Boot Hill Bounties is disappointing. Here is a fresh new JRPG – my favourite genre – being released onto Switch at a time that COVID-19 is forcing us all to self isolate, and therefore I have plenty of time to get stuck into it. What makes it such a disappointment is that despite that, every time I try and play this thing, I have to stop after about half an hour and take a break because it is so deathly boring that it very nearly puts me to sleep.

Boot Hill Bounties is a noble idea, in fairness to it. It wants to blend a retro JRPG structure with the Wild West narrative genre, and it does get much of that in there. There’s the conflict between the “cowboys” and native Americans. The aesthetic is rendered appropriately to the genre. The characters have the right mannerisms for the setting, too (written out in text rather than spoken, as there’s no voice acting in this game). And yet, while it does broadly get the “Wild West JRPG” right, Boot Hill Bounties never manages to escape the impression that you’re playing a particularly enthusiastic RPG Maker project. Sure, the developers haven’t simply used the visual assets that are in RPG Maker, but the quality of the writing and the general structure of the game is vintage RPG Maker stuff. The developer would have you believe that it’s “traditional,” but really it’s just flat.

The Switch version also seems to have technical issues, that I’m not sure were present in the PC original. While the game itself flows fine in combat, there seem to be delays in cycling through conversations during the story bits, making each dialogue section a grind to push through (particularly when most of the text is purely functional, pointing you in the next direction that you need to go). Individual sentences are also sometimes structured oddly, and I needed to re-read more than a few blocks of text to be able to parse them properly. It does make sense, but Boot Hill Bounties could have used an extra editor’s eyes over the script, for the sake of simplicity and efficiency. 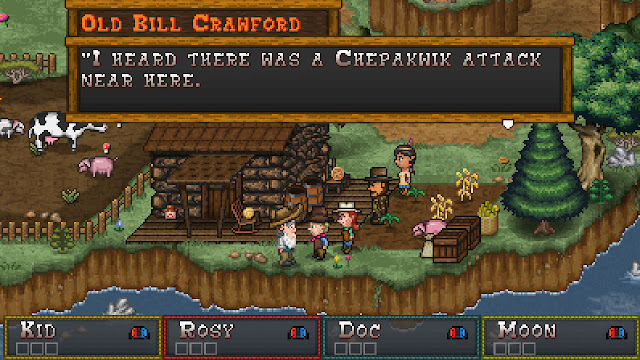 I struggled to care about any of the characters in Boot Hill Bounties, and that’s largely because they’re devoid of character. There’s a little introduction that tells you who each character is and how they came to become involved in the group, but once the main plot kicks off there’s just not that much to hook you in and keep you interested. I’m playing this alongside a replay of Final Fantasy V, and while FFV has, if anything, less dialogue, every word from each character is carefully weighted to achieve a maximum drive through of distinct personality and tone. The relatively flat way that the characters in Boot Hill Bounties interact with one another is much more difficult to get invested in.

Combat fares better, thankfully, with a variation on the kind of ATB system that Final Fantasy titles tend to use. Both the heroes and the enemies have a bar that slowly fills up and, as it fills, characters can take actions. The interesting quirk that we don’t see in most games like this is that each action has a different “rating”, from 1 to 10, with the higher-rated attacks requiring more of the bar to be filled up to execute. This introduces a nice element of risk vs. reward into the action; do you use a weaker ability in the hope that it can knock out an enemy quickly, or do you try to build to something more powerful?

You can also see the attack that the enemy is building up to, too. If an enemy is preparing to launch a 10-strength attack, you’ll want to find a way to either disrupt that attack, or put your characters into a defensive stance just before that attack happens, because otherwise it’s almost certainly a one-hit KO. Too many enemies have these and it’s often too hard to do anything about them (particularly because many of the characters don’t have great defensive options), so while it’s an intriguing system, its execution leaves something to be desired. 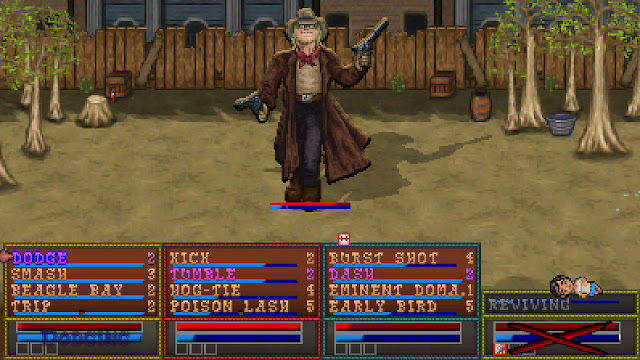 Interestingly, characters are also limited in how many different kinds of abilities they can draw on. Abilities come from the “hat” equipment that characters have, and as they level up, they unlock new skills for those hats. A little like it is in Pokemon, however, it doesn’t take long to have to choose between a new skill, and keeping the existing skills that you’ve been using. I do generally like this as a feature in Pokemon, because it gives you a great deal of control over the development of your team, but with Boot Hill Bounties it feels more arbitrary, as Boot Hill Bounties doesn’t have the same range of Pokemon to and abilities to draw on; With Pokemon you can carefully train up your team to ensure that each character’s skills add to the overall team’s capabilities. Here, it’s a bit of a crapshoot over whether replacing one skill with another will be a long-term benefit to the party.

Finally, I’m no fan of the combat aesthetics. Boot Hit Bounties adopts a Dragon Quest-like perspective on the action, with your team off screen, and you observing the enemies in “first person.” However the enemies are the wrong kind of pixilation and are quite unpleasant on the eye. They also lack the charm and humour of a Dragon Quest. Combat with these critters is generally static, with a real minimalism to animation and effects, and so why it all works, it’s not like you’ll be exited to run into new enemies and environments either.

Ultimately, Boot Hill Bounties just doesn’t do much of anything. It does succeed in being a retro-themed JRPG set in the Wild West, but it’s not a particularly interesting Wild West, the combat system is functional, rather than interesting, and it was really hard to maintain interest in anything that the game offers. Boot Hill Bounties doesn’t do anything wrong… other than be so uninspired that it doesn’t give anyone a reason to play it either.

Psychological horror game, The Inner Friend, lands on PS4 and Xbox One soon

The Friday Ten: Ten games that deserve a (much) better reputation