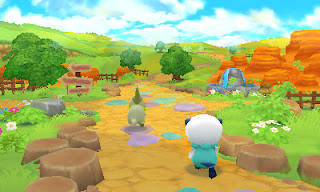 Time for one of those admissions that I probably shouldn’t make and then expect people to take me seriously afterwards; I prefer the Pokemon Mystery Dungeon games to the real games.

I know, I know. Mystery Dungeon games are repetitive and generally far more simple games than the real Pokemon games. The plots are even simpler and aside from the endless grind of levelling up and tackling the occasional story quest, there’s not much else to do in these games. And, as far as Mystery Dungeon games go, these are by far the most easy to play through – and this is a genre that is not designed to be easy.

But to me there’s something endlessly appealing about playing an RPG stripped down to its very basics, and with some of the “collect em all” appeal of the main Pokemon games making the transition, this Pokemon off-shoot series is one that I find myself playing for hours at a time without really realising it. To me, these is a charming and relaxing expenses and though they haven’t evolved much over the years, I find myself getting eagerly stuck in with each new release. 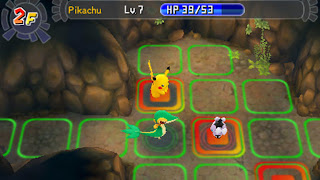 Which brings me to Pokemon Mystery Dungeon: Gates to Infinity. This game is as guilty as its predecessors of presenting a very generic RPG experience, but I found it as entertaining as ever. Thanks to the clever use of very simple 3D, it’s even more charming. The Pokemon characters have a nice solidity to them on the 3DS’ top screen, and their various movements and attacks brim with a simple, bright charm.

Anyone who has every played a roguelike or Mystery Dungeon game will know what to expect from the outset in Gates to Infinity. Randomly-generated pathways and rooms filled with traps and randomly-generated monsters need to be traversed, always on the hunt for the staircase to the next, slightly tougher level. This continues until a player either completes an objective (and is whisked back to the small hub town which is good for shopping and brief story sequences), or runs out of health and faints in the middle of the dungeon level. If this happens players can send out an SOS via StreetPass for someone to come in and help them, or they can accept the loss of some treasure (not all, making this far “nicer” than most Mystery Dungeon games) and return back to town for a second crack at the mission later. 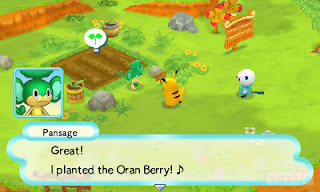 The problem with the StreetPass feature is that it relies on you passing nearby someone willing to help to work. OK for people with multiple 3DS’ and family members playing along, but not so great for people relying on strangers. To be frank this game could have handled the social features far better given that there have been plenty of Mystery Dungeon games with great social or online play options in the past.

I’m also less than a fan of the DLC model that this game has going on. Players can purchase extra dungeons that feature various major bonuses as a reward. For the more inexperienced players (i.e. younger children) who might find this game a little too challenge, it almost feels like a “pay to win” situation, with some really good stuff being locked away behind a paywall if players hope to obtain it easily. For more experienced gamers the question has to be asked why this content was not included on the original purchase, as it feels a little exploitative.

That unpleasantness aside Gates to Infinity has all the loot-grinding and Pokemon-collecting we’re used to from the series. It might not be challenging enough, but it is long enough. There’s a couple of moves and attacks that are overpowered, and I’ve got to say the balance of the game is generally quite badly off, but that’s largely nitpicking. Pokemon Mystery Dungeon games were never built to be life changing. They’re there to be simple fun, and this game largely succeeds in that aspiration.