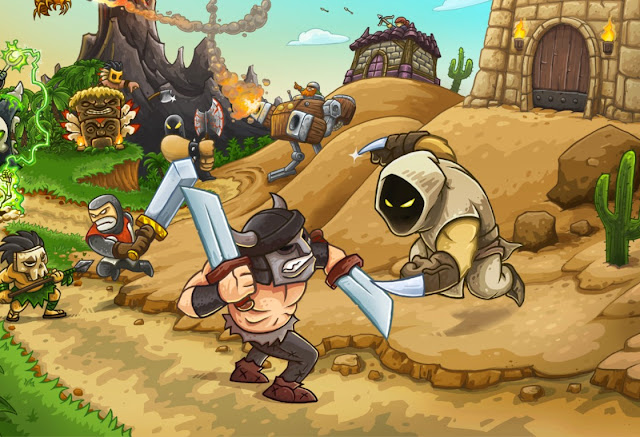 For a time the tower defence genre was a giant. It was when there was still space for premium-priced phone games, and people latched on to the simple – but challenging – strategy of tower defence as an the ideal time killer to make the daily commute tolerable. The limitations of the genre meant that it ran out of ideas pretty quickly, and while plenty of games now include tower defence elements, there aren’t that many dedicated efforts at the genre that gain any kind of prominence now. Kingdom Rush is one of the rare exceptions, and now that series has come to Nintendo Switch.

Kingdom Rush Frontiers is classical tower defence. There’s a road (generally split in a couple of directions) along which waves of enemies march. Along that road in pre-defined spots, you can build a range of different towers, which will then auto-attack the enemies. If any enemies get through to the other end, you lose health points, and if the health points reach zero, it’s game over.

Waves start out relatively weak, but rapidly escalate in power, and you’ll find yourself scrambling to make sure that you’ve got a good layout of a wide range of towers to deal with every enemy type. Some are more resistant to certain kinds of projectiles than others. Leveled up towers do more damage, but all that costs money, and of course you’ve got a limited supply of that. Finally, you do have some magical abilities that can help damage enemies or create obstacles to slow them down, but each of those abilities has a cooldown. 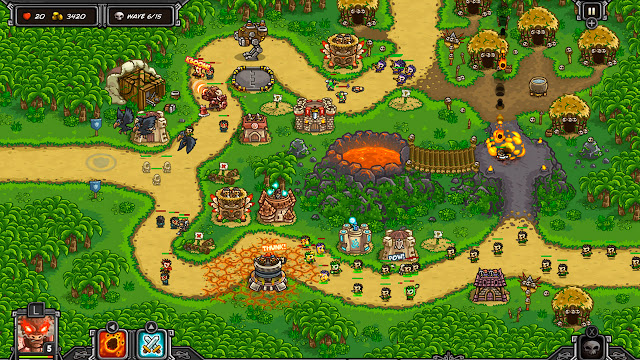 Success in Kingdom Rush is, much like with every good tower defence title, a matter of resource management. You’ll always feel like you’ve never got quite enough to be comfortable with your defences, and you’ll often need to restart levels after realising that you’ve put just one tower in the wrong spot. You’ll need a very mathematical mind to crunch the numbers and determine the ultimate balance of towers that will cause the maximum carnage to the enemies.

Kingdom Rush Frontiers makes a number of mistakes, though, and the experience is the less for it. One is giving you resources to power up towers between levels. Each level escalates the overall difficulty of enemy waves significantly, so you’ll need to spend resources to increase the base statistics of the tower after each level. The problem is that the upgrade paths don’t really track along with the escalation in enemy difficulty, and so Kingdom Rush feels both unbalanced and unfairly difficult, and quickly. Success becomes more about having levelled things up right, rather than enacting superior strategy.

The really big, problem, however, is the game is ill-suited to the Nintendo Switch screen. Kingdom Rush, on other devices, has a colourful, brightly cartoonish personality. Unfortunately, on the Switch screen everything is so tiny that it’s hard to make out anything, let alone get a sense of character from it. This impacts on the gameplay, too. It’s hard to make out individual enemy types, and more than a few times enemies that I hadn’t noticed slipped through my defences, because I wasn’t able to account for that enemy type in my strategy. Furthermore, when the screen does get busy, the parade of little dots becomes genuinely hard to follow and interpret. 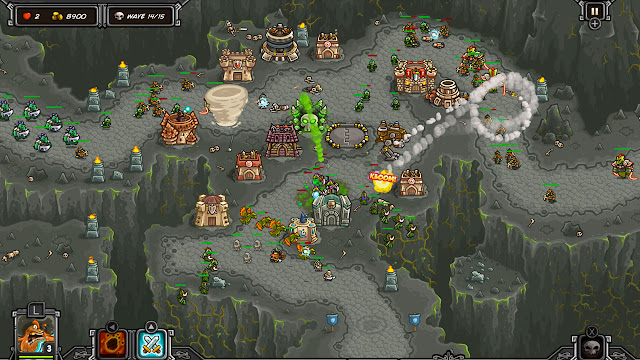 There’s also an issue with Kingdom Rush being such a pure-play tower defence game. There’s a lot of content, with plenty of levels to play through, and a mobile-like three star reward system that encourages you to replay levels to earn a better result. But there’s very little context, aside from a couple of sentences of bland text here and there. There’s also the simple reality that, if you are a fan of tower defence, the Nintendo Switch has vibrant, original, and creative options available to you. Everything from PixelJunk Monsters to Hell Warders works hard to find original spins on the tower defence formula, making this game, which so steadfastly sticks to tradition, feel both hollow and uninspired.

Kingdom Rush isn’t even that great by tower defence standards. The towers are generic and bland, and enemy hordes are entirely predictable. There are some tower defence games that I would love to come to Switch, from that “golden era” where the genre was flying high – the Final Fantasy Tactics-themed Crystal Defenders or the samurai-and-Japanese-ink-art Mikado Defenders, for example. Both traditional, but character-driven and charming in a way makes them almost endlessly replayable. Kingdom Rush may be the last rear guard for tower defence, and on a device like the iPad, the bigger screen does allow for bigger characters so the game has some kind of personality there. Here, on Switch, however, it has nothing to offer.

No matter how disgusting he finds anime, Senator Stirling Griff is wrong to try to censor it