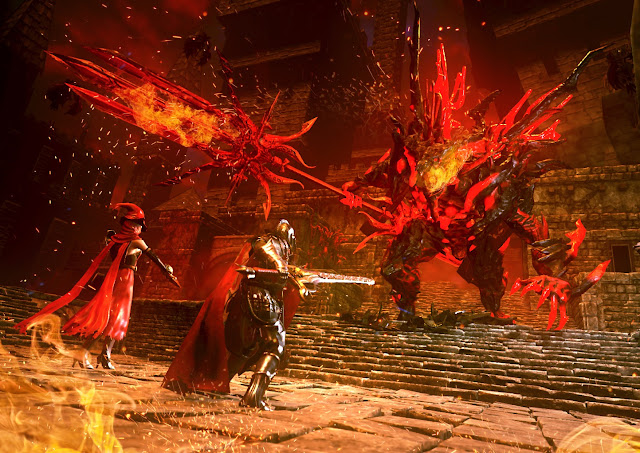 Remember when just about every second mobile phone game was from the tower defence genre? There was a period where it was a little like the roguelike genre is today, with developers falling over themselves in excitement to announce that they’ve created a new tower defence title. Those were good days too because when it’s done well, the casual strategic challenge of a good tower defence is hard to top. Sadly the heyday of that genre has just about passed, and now developers are instead looking to build on the residual appeal of the faded phenomenon by making the tower building stuff just part of the experience. Hell Warders is the latest attempt at a genre blend, mixing gothic themed action with tower building. The good news is that it does mostly succeed.

In Hell Warders, you play as one of a few heroes that look like prototypes for Diablo classes, and in each level you’re tasked with defending a glowing orb thing from invading hordes of demons. If you were by yourself, this would be an impossible task, since the hordes come in waves of dozens after dozens, and from multiple directions at once. Thankfully, you’re also able to build yourself a range of medieval knights, wizards, archers and more exotic heroes, who will stand on the spot and attack any enemy that comes near to them.

If you’re a fan of tower defence, you have almost certainly played this kind of game before. Dungeon Defenders is the big one that many would know. I remember spending many hours playing that with the early era DDNet team back when the site was designed to exclusively review the little indie games that were being released on PlayStation Network (it really wasn’t that long ago where there was a strict line between what was released for digital download off those platforms, and the big budget retail stuff). There are other options, too; Orcs Must Die! can be played on current generation consoles, and it does much the same thing.

Like those other titles, Hell Warders even benefits best when playing in multiplayer. Demon hordes come in from multiple angles, and just as the strategy behind placing towers is simple, but effective and enjoyable, so too is the strategy in working with more than one person to cover all the horde paths. Hell Warders allows for up to four player co-operative gameplay, but it’s worth noting that it’s highly recommended that you play with at least two, as the difficulty curve seems to assume that you’ll be playing multiplayer, so that in single player the game feels unforgivably brutal.

For all its structural similarities, what the developers looked to do differently with Hell Warders is the theme, and there is something viscerally entertaining about seeing a horde of truly ugly demonic monsters descending on you through a rift. It’s not the most unique idea, of course, but the directly behind-the-back perspective lets you stare down the horde as it comes rushing in, and, before the wave crashes against your meticulously placed defenders, seeing that is a Book of Revelations-style apocalyptic vision that never fails to get the hairs on the skin to rise up.

Sadly, once demonic flesh is tearing into knight’s armour, the visual spectacle of Hell Warders goes to hell a little. There’s just too much on screen happening at once to really make out anything in the chaotic melee. Your “towers” can be killed, for example, but I could never really work out what I had lost until the very end of a wave of enemies. You could argue that there’s a lot of thematic sense in that; those brief, two or three minutes from the end of the wave until the next one gives you the shortest of breathers to take stock, and forces you to be on your toes even during the moments of “rest,” but it gets so chaotic during enemy waves that it’s too easy for the action to descend to a case of flailing about and just hoping for the best – particularly if you’ve selected a melee character to play with. 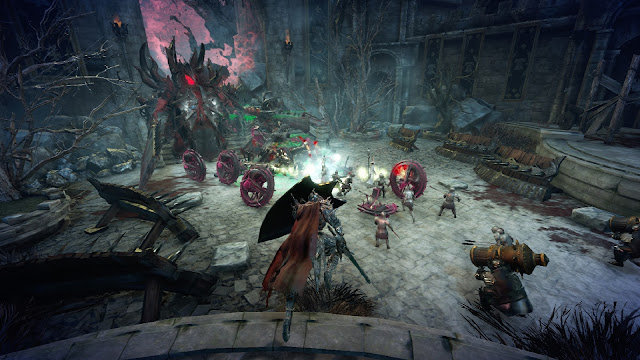 This too works somewhat in multiplayer, as you can designate one of your team’s ranged character classes to hang back a little and keep an eye out for weaknesses in the line. But for single player, there’s too much to follow, too often, and I failed at more than a few levels because enemies would slip through the cracks and I wouldn’t be able to get back to deal with them in time.

The other big problem with Hell Warders is the lack of a decent narrative. This game has the most gorgeous level and character designs, and yet the narrative is stretched incredibly thinly, and aside from an intro, what storytelling there is usually happens right when you’re in the thick of the action. You don’t necessarily need to follow the story along, since the game is structured as a series of levels one after the other and don’t rely on context to be playable, but there’s a great sense of lore about the design of Hell Warders, and it’s a pity the developer didn’t put more effort in there. This is especially true given that you can level your characters up as you would in an RPG (and thus will want to know more about them than the narrative shares), and there’s a large number of artifacts and the like to earn through playing that you’ll find intriguing enough that you’ll likely want to know more about them than the narrative gives you.

For this kind of setting, you don’t need an overwhelming amount of depth in the storytelling; Diablo proved that a lot can be done with a relatively thin storyline when you’re setting players the task of dealing with demons and other such hellspawn. But you do need a think narrative, just to give the action context, and Hell Warders left me wanting far too often. 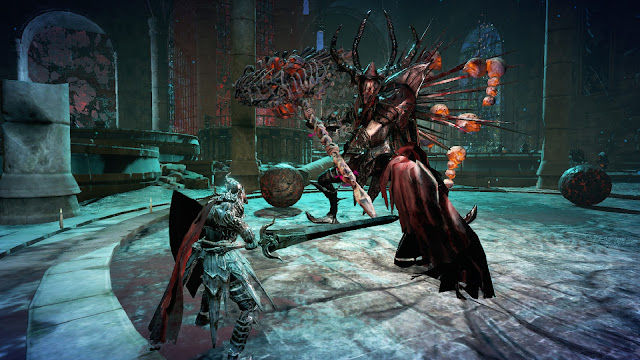 If you can get a group together, then Hell Warders is a lot of fun that you won’t soon forget. The action is tight, the challenges is robust, and the setting is impeccable. For single player tower defence, there are better options on the Switch (namely PixelJunk Monsters 2), but nonetheless there’s a lot of effort and talent that has gone into Hell Warders. The developer has a great basis here to build on from here, either through DLC or additional titles, so it will be interesting to see what comes next.

Video: Dead or Alive 6: The sexiest game ever?

The games of March and our favourite obscure games (Digitally Uploaded 2019, Episode #7)