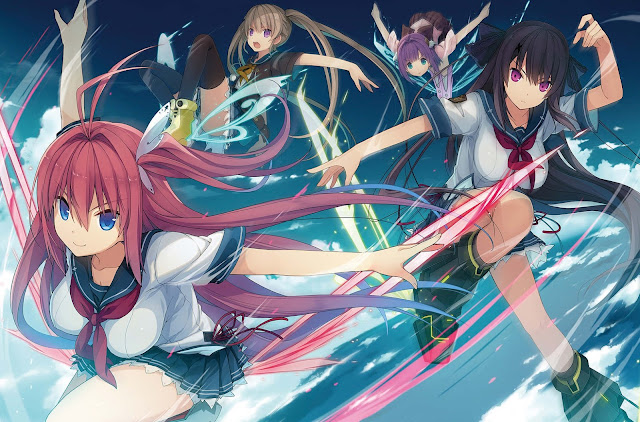 While I do wish that PQube would hurry up and partner with Kadokawa to bring us one of the LoveR series (they just look so good), the localisation outfit’s newest announcement is for a game that has been deserving of its own chance in the west for quite some time. Aokana: Four Rhythms Across the Blue was first released on PC in Japan way back in 2014, and now, courtesy of PQube, it’s finally getting an English localisation on console, with a PlayStation 4 and Nintendo Switch version following on from the game’s English release on PC last year.

The game’s description, according to a press release:

The story of Aokana plays in a world where science finally did it and invented anti-gravity shoes! With the dreamlike ability to freely fly through the skies, a form of sport called Flying Circus became popular, where athletes soar through the air to score points.

Slip into the role of Masaya, a former competitor, that encounters the new transfer student Asuka who strives to learn how to fly. Get involved in the Flying Circus sports club, support the ambitious girls and eventually end up with your own head in clouds!

It’s actually a fairly well-respected visual novel… with the added benefit of featuring plenty of pretty girls in pretty uniforms. Not that Steam user reviews are great for gauging the quality of visual novels – it only tends to be the fan base that buys into them, with a massive (by VN standards) 792 reviews, the game currently has a 99 per cent positive user score and that is noteworthy.

There’s no release date just yet, but PQube has given us this lovely trailer:

Dead or Alive 6 update: Hairstyles, panties, Chinese dresses, and so much more!