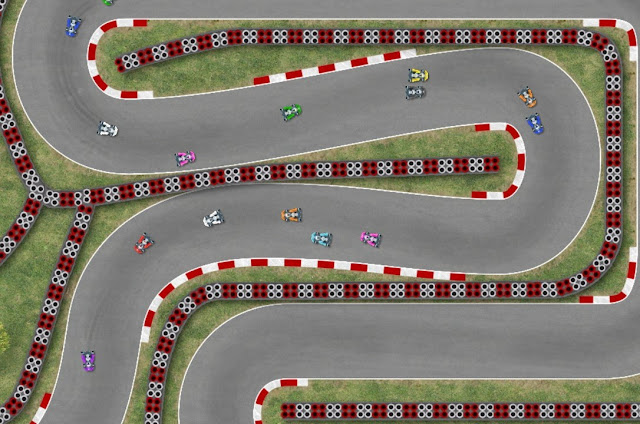 I feel sorry for the developers of Ultimate Racing 2D. They’ve done the best they can to make something that punches well above its weight in terms of the quality and quantity for a hyper-indie project. I was genuinely surprised to see that there were so many features in this game. On the other hand, it really is a 2D top-down racer with Flash-like art.

You can play championships, career, and (local) multiplayer, and what’s really impressive is that there are so many options to all of those. Car classes range from go-karts to speedway bikes, right up to Formula 1 cars and supercars. There are even joke classes like tractors and limousines. Unfortunately much of this effort is wasted beyond the visual because the differences between driving a limo and a F1 car are far too subtle. Some vehicles go a bit faster than others, and when you’re on a dirt track rather than a standard road there’s some steering differences, but mechanically, Ultimate Racing 2D doesn’t offer the variety that its range of classes promised. Given the simplicity of the top-down 2D sprites, the idea of hooning a tractor around is more amusing than the reality in this game too.

While the racing is mechanically simple – accelerate to a corner, break, and hit the curve on the ideal racing line – the options for play are impressive. Page after page of tracks to choose between – most of them a spiting resemblance to real world tracks, and the ability to customise everything from the weather to the number of laps. Up to eight people can play in multiplayer too, and I’m sure somewhere out there there will be a party of eight people who find the game amusing enough to marathon through a 150-lap event. 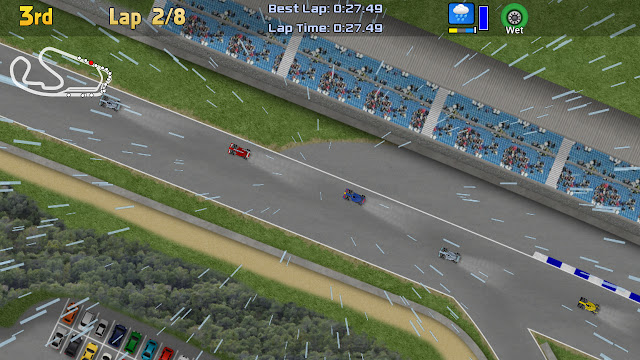 When playing solo you can play against 30-odd AI racers, with a 0-100 difficulty scale. Those that like to challenge themselves will be happy to know that at 100, the AI really is tough to beat. Don’t get too excited about this though, because the AI sticks to very standard, bland racing lines, and while they’re more aggressive on the speed at the higher difficulties, it’s not exactly Project Cars where every opponent is their own challenge to overcome.

In fact, the bland artificiality of Ultimate Racing 2D is its biggest let-down. As I’ve already mentioned, the game has something like a dozen different car classes, but they all control much the same. Within each class you’ll have a range of different vehicles to choose between, but everything is unlocked from the start, and the stats are implemented in such a way that choosing a car basically functions like a handicap. The best car has an irreversible statistical advantage over the next car, and so on and so forth until the lowest car is so inferior that a bottom half finish is all-but inevitable. There’s no way to customise or develop these cars so they can become relevant, and everything is unlocked from the outset, so what point is there to use any other vehicle but the best one… other than to set yourself an artificial challenge?

Career mode is equally artificial. You actually select the tracks that you want to race on, for a start, so it’s not really any different to the championship mode, other than it continues on over a period of time. With no effort to implement a narrative, story, or management element, however, career mode is nothing more than an endless sequence of racers, offering nothing that you couldn’t orgaanise for yourself by playing a series of quick races, with a spreadsheet on your computer to track results across time. 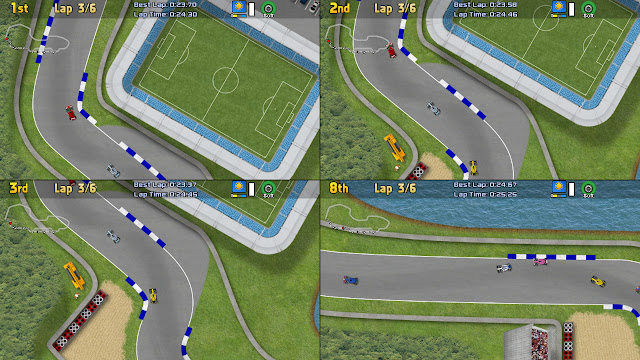 On the track, the physics are arcadey, but actually quite competent. The racing lines that you need to hit, and the balance between acceleration, breaking, and accelerating back out of corners is a reasonable abstraction of the sport of racing. There’s no facility to handle car damage, and so collisions are not a concern, but that’s okay. Ultimate Racing 2D isn’t trying to be Gran Turismo.

However, the game also lacks any sense of speed or racing. It’s the visuals that do it. Each vehicle is an icon, nothing more. You don’t see the wheels turning, so it’s hard to contextualise the motion as the car slides across the screen. Because you’re not given the behind-the-back view, you also don’t get to see the scenery whip by based on the speed that you’re moving. The best chance the developers had to implement a sense of speed with this particular top-down approach was to manufacture it through the screeching of the wheels across the tarmac and the sounds of the engine, but the audio is cheap and soft, and the best that we get is a light skid-mark from a slide.

Finally, with no online leaderboards, Ultimate Racing 2D has limited long-term value. The appeal of racing games is always about hitting that perfect time and then trying to shave micro-seconds off that. With no way of comparing what you’ve done with other players the incentive to continue playing after a season or championship or two just isn’t there. 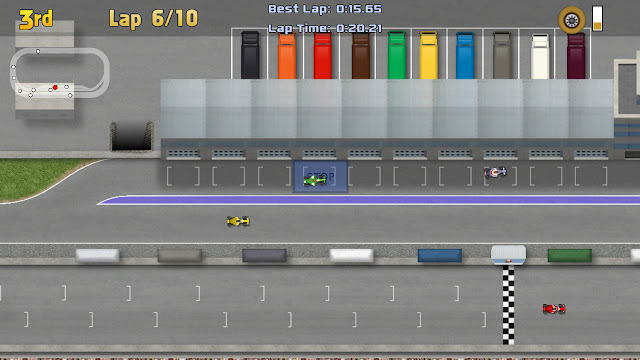 I know a lot of the above is difficult for a small independent team to pull off, and in all honestly, the fact that Ultimate Racing 2D provides solid base mechanics and a wealth of ways to play (including 8-player local multiplayer) is admirable. This is not an indie that has looked to a quick cash-in for minimal effort. It’s just unfortunate that the racing genre is such a competitive one and, even on the Nintendo Switch, there is everything from Mario Kart, to rally racers, bike racers, and a half dozen existing top-down speedsters. It’s just not enough to provide such a stock-standard racing game, however good the intentions.

Patreon Essay: On Final Fantasy X and its relationship to Gothic literature