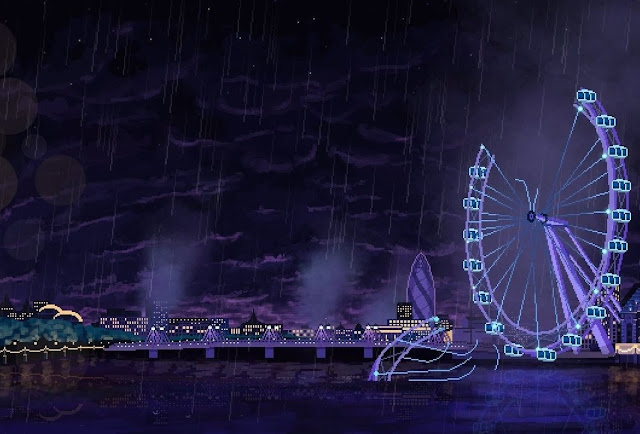 After many years of exhibiting varying degrees of the hardest of nationalist fervour, the UK finally leaves the EU today. The “Brexit” thing that has dominated every conversation to do with the UK for so many years now has finally happened. We now get to sit back and watch as the world’s second biggest dunce (after Donald Trump) Pied Pipers his country down a truly miserable rabbit hole. That’s going to be a joy and a half to watch play out. In the meantime, we can also play Not Tonight. A game that is a direct response to all of this Brexit stuff, and is heavily on the nose, but works as a pretty good summation about everything that has gone wrong in letting that movement take over.

Not Tonight isn’t subtle about where it borrows its game design from, either. It’s a deep homage to Papers, Please, Lucas Pope’s brilliant, and equally scathing social critique from a few years ago. In Papers, Please, you played an immigration officer to a dictator’s nation, who needed to decide on who could or could not enter into the country. In Not Tonight, you play as a bouncer, who needs to decide on who can enter one of a series of bars to drink themselves into a stupor, and forget that their country is crumbling around them for an evening.

But you don’t play as just any person in Not Tonight. No. You play as an immigrant. Or, more accurately, someone who’s not enough of a citizen. You can pick from a few profiles, but it’s stuff like having parents who were immigrants, even though you were born in the country, which has now made you a foreigner. Your circumstances are enough to give the local bigot squad – I mean, immigration police – the opening to throw you out of the country. The only solution is to pay off ever-more extravagant temporary visa fees, and the desperate scratch for cash will encourage you to take all kinds of bribes and get involved in truly shady activities. 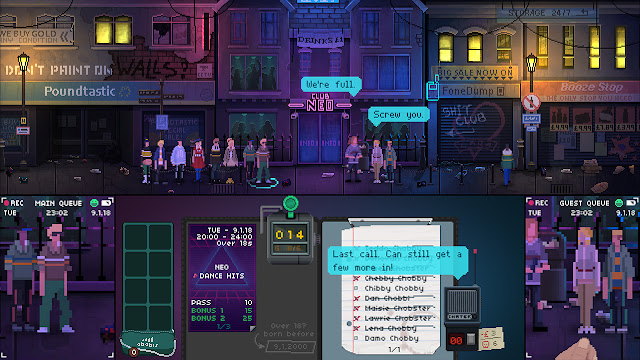 To do your job, you need to make sure that a patron’s ID is correct. They’ll present you with a card that has their photo, birth date, nationality and other identification information on it, and it’s your job to check and make sure that all the details are in order. Let enough people in with fake or incomplete IDs, and you’ll start to be fined, or fail in the job entirely. Of course, some people will try and slip you some cash to look the other way, and you’ll be tempted, because not only do you need to pay those visa fees, but you’ll also need to pay rent on a truly dingy apartment (assigned to you as you’re forced to move into foreigner’s-only quarters), and you’ll be expected to participate in crass capitalism and spend money on crap you don’t actually need, in order to make a good impression. “After all, if you’re not spending, how do we know you’re fitting in?” says the representative on an online shopping app, as she forcibly installs it onto your phone.

As the game moves on, you’ll be pushed into ever more difficult moral choices about the activities that you get up to, and you will be so tempted to start doing really shady stuff for that extra money. It’s incredibly hard to succeed in Not Tonight by playing as a straight arrow, and that is exactly the point. The increasingly risky stuff that you’ll get up to has potentially grave implications for your ability to stay in the country, let alone even the right side of the law, and there’s a point that Not Tonight is making about poverty in there. People want to pay their bills (whether it’s out of a sense of obligation or the threat of having their lives ruined), but for those in desperate circumstances, doing things “the right way” will barely allow them to keep their heads above water, if it does at all. There’s a real oppressiveness to Not Tonight’s atmosphere, and it’s driven by the gleeful way that the game likes to throw additional expenses at the player’s character. Truly, you’re meant to feel indentured and abused as you drag yourself from one job to the next.

Layered over the top of that is the fact that you’re playing as a “foreigner”, and the locals do not like foreigners. The overt racism that is displayed towards your character is so extreme that it does come across as heavily on the nose, but it’s worth mentioning that while many foreigners in other countries don’t experience racism to this degree explicitly, they certainly feel it implicitly. Not Tonight is focused on the UK story, but you only need to look at how Chinese (and Asian) communities are being treated in western countries in the wake of the coronavirus, and how the media are out there talking about “the Chinese” in such an aggressively pejorative manner, to realise that anyone with an Asian background is starting to feel the walls close in around them. The story of Not Tonight carries universal truths about racism, and while the in-game news ticker and headlines are hyperbolic, they’re also tonally accurate to just about any mainstream media coverage of “foreigners” at the moment. 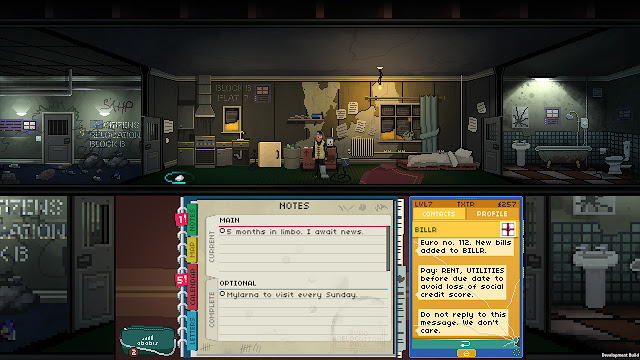 While Not Tonight is explicitly about the UK, the themes that it addresses – rampant, unchecked nationalism and bigotry – are universal to western nations at the moment. The art style and aesthetics help there. While the game’s pixel art is detailed where it needs to be in terms of environments, and particularly when you’re looking at the IDs of people trying to get into the club that you’re working at, there’s also a “blank canvas” tone to Not Tonight’s aesthetics, allowing you to easily parallel the principles of what you’re seeing go on with many other places in the world beyond the UK.

There’s a dark, but exquisite, sense of humour to it all, too. Whether you’re following the news on your (cracked, barely working) mobile phone, or interacting with one of the wide range of different characters, the writing is both on-point and so sharp. Take for example one of the bar owners – do well, and he loves your work, giving you a steady increase in pay, but all along talking about “foreigners” as a separate species apart – they can be “good chaps”, to use the very British turn of phrase, but they ain’t Brits, and he just can’t see why that attitude is a problem. It’s not a funny subject, but it will elicit laughs in the way that it’s written, and every character is written beautifully with an expert eye for the hyperbolic and surreal. It’s the humour that makes the characters relatable. If Not Tonight lacked that humour, it would be a truly miserable experience. As it is, it’s impossible to put down, if only to see what will happen next in the plot, and what event will boggle the eyes and force a chuckle out of you next.

As a game, Not Tonight really works well. The escalation of difficulty is tuned perfectly – you’ll start out needing only to check birthdays and the ID card’s expiry, but after a while you’ll be running your eyes over a half dozen details on each card, and moving back and forth between multiple lineups, trying to deal with both VIPs and regular bar-hoppers to keep everyone happy. Each night you’ll have a quota of patrons to get into the bar, and it’s when there’s just a couple of moments left, but you still haven’t quite hit the quota, that things get really intense. You’ll be constantly tempted to skim over the ID cards in order to get the turnover happening more quickly, but that causes mistakes and every one of those brings you closer to a very unhappy ending. 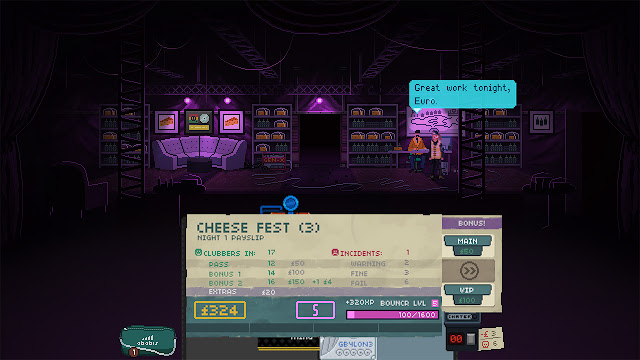 Not Tonight is a deeply relevant, thoughtful experience. It comes from a place of genuine frustration with the way too much of the world is behaving at the moment, but manages to channel that frustration into something productive – a satirical (however darkly), deeply sympathetic game, that’s both entertaining and has a strong point to make. Is it a little too infatuated with Papers, Please? Yes, but you could do far worse than create a breathless homage to a game that great.